You are here: Articles -> Famous Britons -> Robert the Bruce 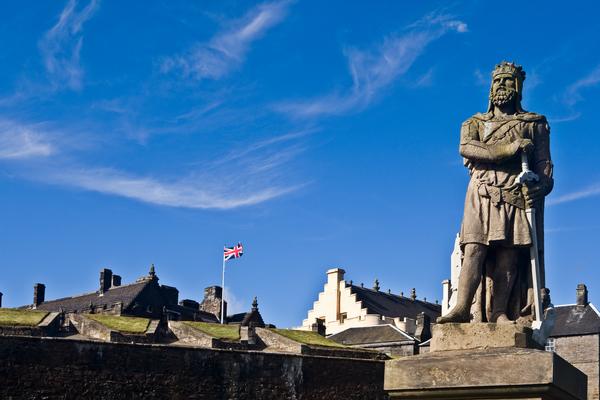 Robert the Bruce, the Earl of Carrick, is considered one of the greatest Scottish heroes of all time. He was best known for his unlikely victory at Bannockburn when he soundly defeated the superior forces of Edward II, which gained the Scottish people their freedom from English control.

Robert the Bruce was born at Turnberry Castle in Ayrshire in 1274 and had both Norman and Celtic blood in his family. His father's lineage gave him claim to the Scottish throne.

When Alexander III died in 1286 the heir to the throne was his young granddaughter Margaret, daughter of the King of Norway. At the time, Edward Plantagenet was the king of England and as a means of subjugating Scotland, Edward I arranged a marriage between his son and Princess Margaret.

Unfortunately the young princess died on the journey. This left several claimants to the succession to the throne including John Balliol and Robert Bruce.

John Balliol was an English baron with a proven loyalty to the English crown, so naturally his claim was supported by Edward I. Balliol was declared the rightful king of Scotland by Edward I and 104 auditors in 1292.

However Edward I's demands in exchange for his support included feudal superiority over Scotland and judicial authority over any Scottish king. These terms were clearly not acceptable to Balliol, who declared himself King of Scotland, answerable only to the Scottish people. Robert the Bruce saw Balliol's appointment as unjust and both Robert and his father initially sided with Edward I against Balliol.

By 1296 Balliol's rule was finished. Edward I defeated him at Dunbar in April 1296 and three months later the King of Scotland surrendered. Edward I then took possession of the Stone of Scone on which Scottish kings were crowned and at a Parliament at Berwick he received pledges of fealty from more than 2,000 Scots, including Robert the Bruce.

However, opposition was growing against Edward I. The following year Robert the Bruce supported the Scottish revolt against him. 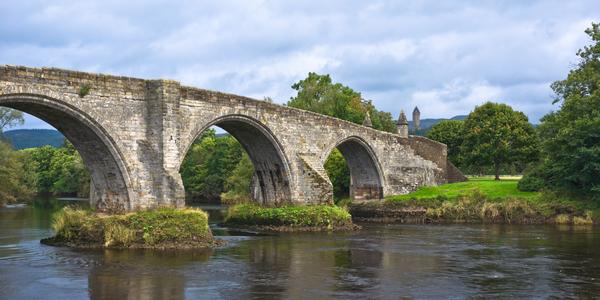 The old bridge across the Forth at Stirling ©Shutterstock / Jane McIlroy

At this time William Wallace led a resistance against Edward at Stirling Bridge and annihilated the English army.

By 1298 the English forces had regrouped and crushed Wallace's followers at Falkirk.

After Wallace's capture in 1305 and his execution, Robert the Bruce took the lead in the fight for Scotland. Bruce murdered his opponent to the throne, John Comwyn and in 1306 declared himself King of Scotland.

Edward I sent a large army northwards and defeated Bruce at the Battle of Methven, executing many of his followers and forcing Robert I into hiding.

In 1307, with the help of Sir James Douglas, Robert the Bruce ended the reign of English terror and won a victory over the English forces. Backed by the clans, he clashed with the troops of Edward I again. The king was in failing health and finally died. His son, Edward II was no match for Robert the Bruce.

By 1309 Bruce was recognized as King of Scotland by the French king and also by the Scottish Church. He continued to drive out the English garrisons and invaded northern England.

The resulting Battle of Bannockburn was one of the most momentous battles in history when against all odds Robert the Bruce won a decisive victory. He later went on to invade Ireland and repelled a second attack by Edward II.

By 1328 a peace treaty had been signed at Northampton recognizing Scotland as an independent kingdom and Robert I as king. The Declaration of Independence was signed at Arbroath.

Robert I went on to rule Scotland until he died in 1329. His body was buried in Dunfermline Abbey and his heart was buried in Melrose Abbey.