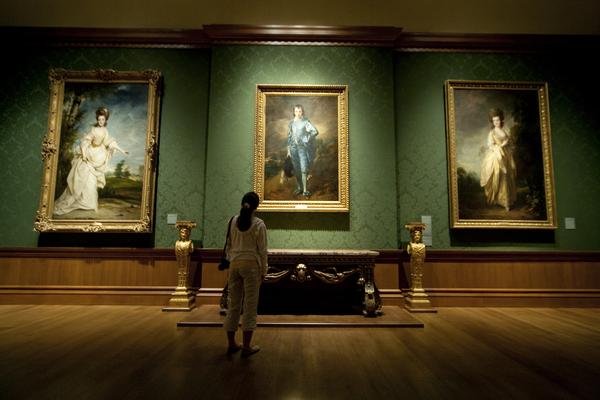 Thomas Gainsborough is without doubt one of the most famous 18th century landscape and portrait painters in England. Few artists achieve recognition in both fields, but it was said that Gainsborough painted portraits for a living and landscapes for pleasure.

Thomas Gainsborough was born in Sudbury, Suffolk in 1727 and was the son of a schoolteacher. His artistic talents were already showing themselves when as a young boy he copied famous paintings. At just 13 years old he was allowed to go to London to study art under engraver Hubert Gravelot.

Gainsborough was associated with artists William Hogarth and Francis Hayman and his early work included the decoration of the Thomas Coram Foundation for Children and the backdrops to the Supper Boxes for diners in Vauxhall Gardens.

He married Margaret Burr in the 1740s and the couple returned to Sudbury and then moved to Ipswich as he struggled to earn a living painting portraits of local merchants and their families.

In 1759 the Gainsborough family moved to Bath where his talents were more recognized. He began painting portraits of wealthy members of society, such as Mary, Countess Howe which can be seen hanging at Kenwood House. His work at this time was influenced by Van Dyck and later by Rubens.

Gainsborough began to submit his works to the Royal Academy which also greatly boosted his reputation. He was elected as a member of the Royal Academy but his relationship with the members was never an easy one and in 1783 he finally removed his paintings altogether.

In 1774 Gainsborough moved to London and lived with his family in Schomberg House in Pall Mall. His work continued to impress and he was commissioned to paint the portraits of King George III and Queen Charlotte in 1780, the first of many royal commissions.

Although Gainsborough was clearly the court's favourite artist, when the royal painter Allan Ramsay died in 1784, the king appointed Gainsborough's rival, Joshua Reynolds who was also President of the Royal Academy, to the post.

Gainsborough's work continued to develop in style as he moved on to painting beautifully detailed landscapes.

He died in 1788 at the age of just 61, suffering from cancer. He was buried in Kew Parish Church next to the famous botanical artist Francis Bauer in Kew Gardens.

His only pupil was his nephew, Gainsborough Dupont. He worked as Gainsborough's studio assistant but his own work was a feeble imitation of his uncle's brilliant masterpieces.

Many of Gainsborough's paintings can be seen in art collections all over the world. His famous landscape, "The Watering Place" and the portrait "Mr and Mrs Andrews" can be seen at the National Gallery in London. The well known "Portrait of a Lady in Blue" painted in the late 1770s is on display at the Hermitage in St Petersburg.