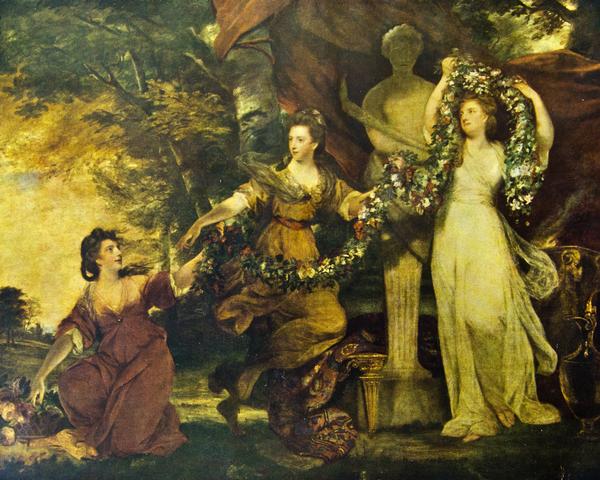 Joshua Reynolds is acknowledged as one of the most influential portrait artists of his time. He was knighted by George III for his work and was the Founder President of the Royal Academy. Yet his achievements almost never came to pass as his clergyman-schoolmaster father was determined to apprentice the young Joshua to the local apothecary.

Joshua Reynolds was born in the charming village of Plympton St Maurice, just outside Plymouth, in 1723. He took his studies seriously, yet spent his spare time painting and copying pictures from his father's books. At the age of 17, with the offer of a job as a trainee apothecary, Joshua firmly insisted that he wanted a career in art.

Through family connections the fashionable London portrait painter, Thomas Hudson, took Joshua on as an assistant to produce his assembly-line portraits. After two years apprenticeship Reynolds returned to Plymouth to paint portraits of British Naval officers who belonged to the aristocracy. His skills continued to improve until in 1749 he was commissioned to paint the Hon. Augustus Keppel, a naval Commodore, and the two became life-long friends.

Reynolds sailed with Keppel to Italy where he began a pilgrimage of Rome, Florence and Bologna, studying the Old Masters, particularly the works of Raphael. It was during this period that a severe cold left him partially deaf and he is often pictured with a small ear trumpet. 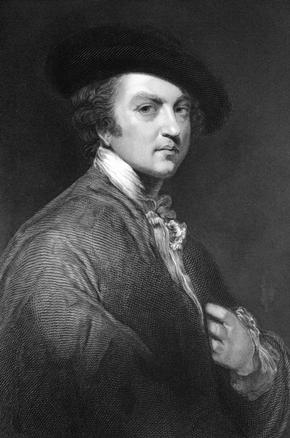 Joshua Reynolds returned to London in 1753 and began painting his portraits in the classical settings he had seen used in Italian masterpieces. He used the recreation of the grand Italian artworks he had studied as a background for his portraits. Rather than being seen as plagiarism, his idea was greatly admired and he was soon charging 80 guineas for a portrait.

His new-found success allowed him to mix with new and influential friends. One of these was Dr Samuel Johnson, a key figure in London's literary society.

With commissions for up to 150 portraits a year, Reynolds adopted his former teacher's idea and used many assistants to fill in his sketches of background and clothing while he painted the faces himself.

In 1760 Joshua Reynolds bought a house at Leicester Fields, now known as Leicester Square. He kept an open house for statesmen, writers, aristocrats and philosophers.

The Royal Academy of Art

When the Royal Academy of Art was founded, Reynolds was made President. He took his position seriously and ensured that the Royal Academy was not only an exhibition of works and a lobbying group but also a successful art school.

He went on to found the Literary Club in 1764. He was eventually knighted by George III for the work he did to raise the reputation of fine arts in Britain. In 1784 he was made the official Royal Painter.

Although Reynolds created more than 2,000 portraits, his use of bitumen and experimental pigments means that some of his works have lost their colour.

Failing eyesight meant that Sir Joshua Reynolds' prolific works came to an end in 1789. He died in London in 1792 and was buried in St Paul's Cathedral.

His works can be seen in the National Portrait Gallery, the Tate and the National Gallery in London. His portraits hang in Elton Hall, Petworth House, the Manchester Art Gallery and in many other art collections of note.