While life in Victorian England changed dramatically during the industrial revolution, the biggest social change was felt in the cities.

Thousands of citizens left the rural life and came to the large metropolises for the guaranteed jobs which manufacturing offered.

London, Manchester, and Birmingham all felt the effects of the growing industrialization.

This influx of people into the city centers made for rapid growth and prosperity. 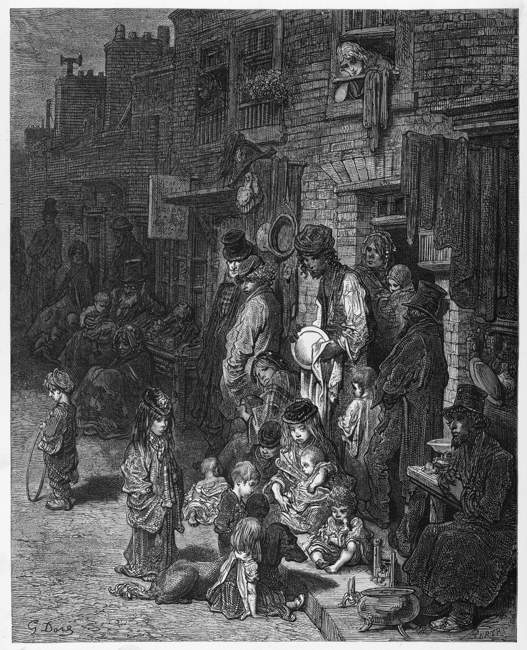 However, there was also a very negative aspect as the crowds of workers had to be accommodated and cared for in a system which was not prepared to do so.

Tenement buildings were quickly built in Victorian London for factory workers and their families. Large houses were turned into flats.

The cost of rent was extremely high, especially when a worker wanted to live within walking distance of his place of employment.

Conditions were often cramped as many members of a single family would live in one room.

Many landlords were indifferent to the appalling conditions their tenants were living in and with housing so difficult to find, few tenants made a fuss.

With tenements consisting of many floors, Victorian Londoners lived cheek-by-jowl with their neighbours.

Disputes were commonplace and often caused by drunkenness.

Jack the Ripper immediately comes to mind when crime is mentioned.

However, he was more the exception than the rule.

Petty crimes, such as pick-pocketing and food-snatching, were a regular occurrence, but assault was not the norm.

Violent crime (read that as crimes shedding a lot of blood) were very unusual.

Doing a person in by poison was popular.

Dr. Hawley Crippen is perhaps the most famous user of poison, although Dr. Thomas Cream had his share of press.

When the Metropolitan Police was organized in 1829, 'bobbies' were a common sight on the city streets. The old palace which was used by the Scots, Scotland Yard, became their headquarters.

With the increase of people in the city, Victorian London began to build public facilities.

The ease of transportation was helped with the construction of "The Tube" in 1863. Tower Bridge became a reality in 1894.

Public squares were offered for pleasure, and for privacy to homeowners. The present Trafalgar Square was completed in 1845, after moving the royal stables elsewhere.

Grosvenor Square, originally built to only be enjoyed by homeowners in the area, was improved and is now a public park. 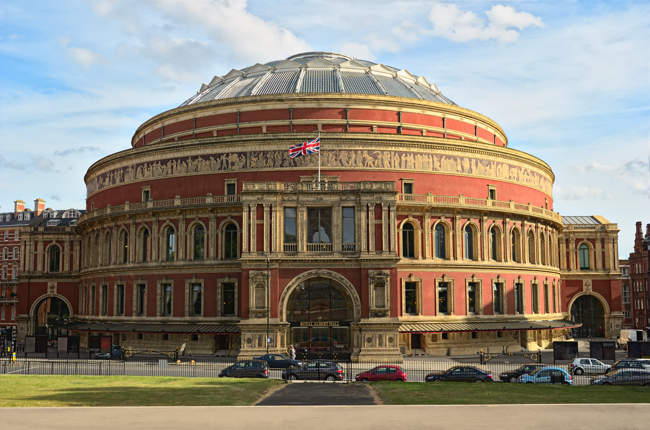 The Royal Albert Hall began to offer music in 1871. Buckingham Palace became the monarch's main London residence while Victoria was on the throne.

To keep everyone on schedule, Big Ben, the clock tower of the Houses of Parliament was built in 1859. 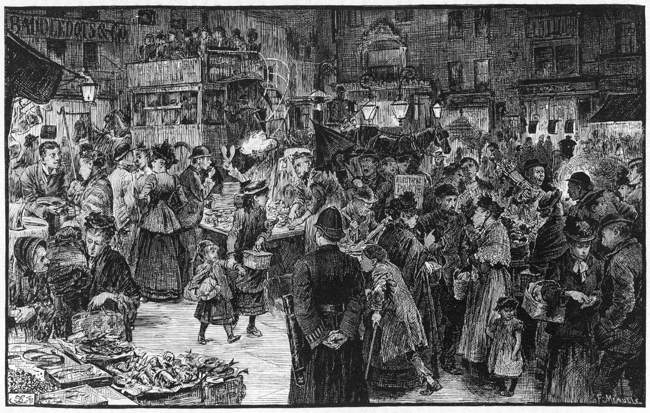 In the early part of Victoria's reign, shopping (for the better off at least) was more a matter of getting into your carriage, arriving at the store front, and having the proprietor come to you.

Along with him would come samples of what he had to sell, and transactions were done on the curb-side.

Victorian London food shopping was handled in the same fashion, although the baker or butcher would bring his food to the servants' entrance of the home.

From there, the housekeeper or cook would make the purchase.

Spending a day inside a shop, instead of outside on the curb, enabled a person to see more articles for sale. 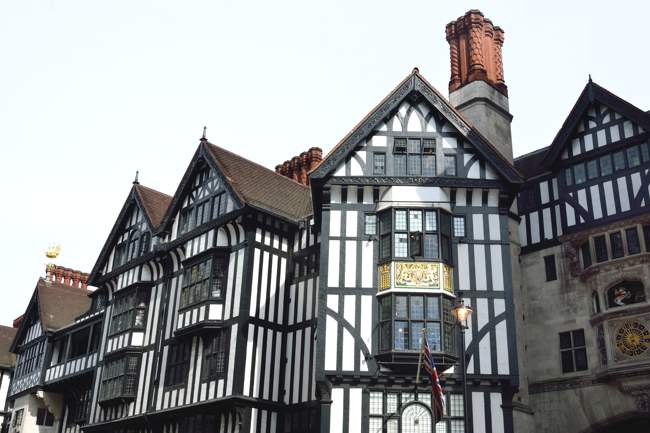 Wares were beginning to be displayed in shop windows, enticing the would-be purchaser to come through the front door.

The Great Exhibition of 1851 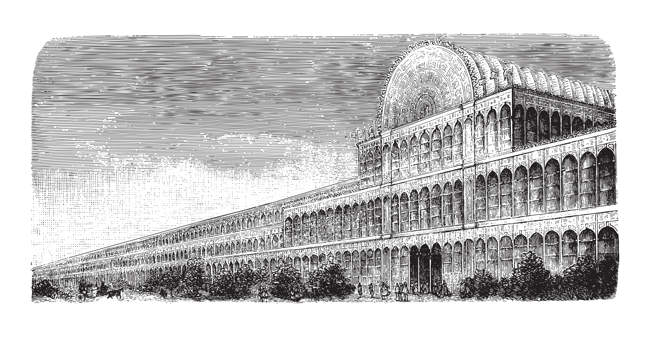 Under the auspices of Prince Albert, England hosted a grand 'world's fair'. Showcased were goods not only made in England, but from other parts of the globe. 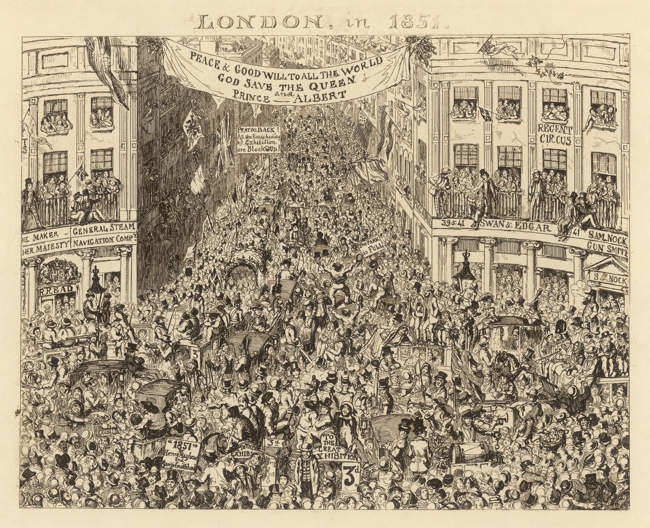 Housed in the Crystal Palace (which burned to the ground in 1936), over 13, 000 exhibits were available for viewing - from an envelope machine to kitchen appliances.

Visitors were able to enjoy flower shows, dog and cat shows, and even a motor car display.

With the profits the six-month Great Exhibition produced, land was purchased in Kensington.

The Science Museum and the Victoria and Albert Museum owe their existence to Prince Albert's idea of showing the world what England could produce. 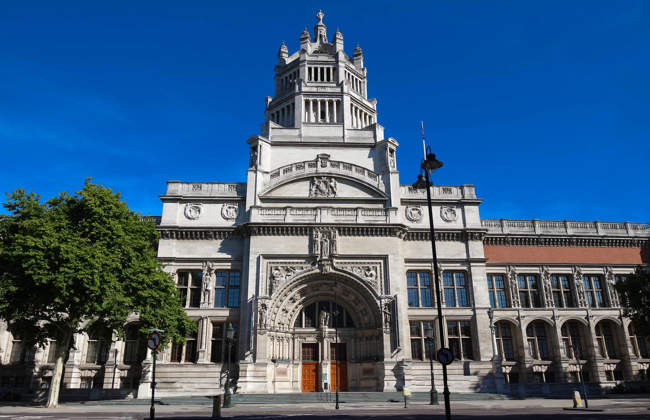 The General Atmosphere of Victorian London

With the combination of sewage, coal fires, and unwashed bodies, the odour of London was horrendous.

Both the rich and the poor had to contend with the evil air around the city.

Even the Royal Family was not immune to the smells and at one time was forced to cancel a water excursion due to raw sewage being dumped into the Thames. 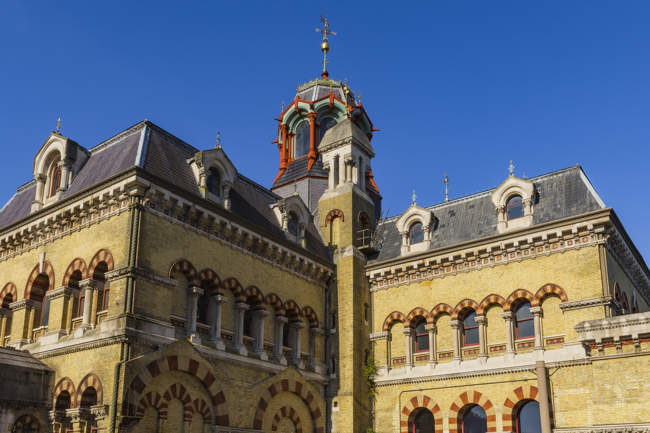 Joseph Bazalgette is to be thanked for building miles of piping to direct sewage away from Victorian London. However, London streets were still filled with manure from horses.

Every surface was coated with soot from the use of coal. New buildings being constructed of Portland stone didn't stay pristine for long.

The air people breathed was often foggy with the smoke from coal fires. 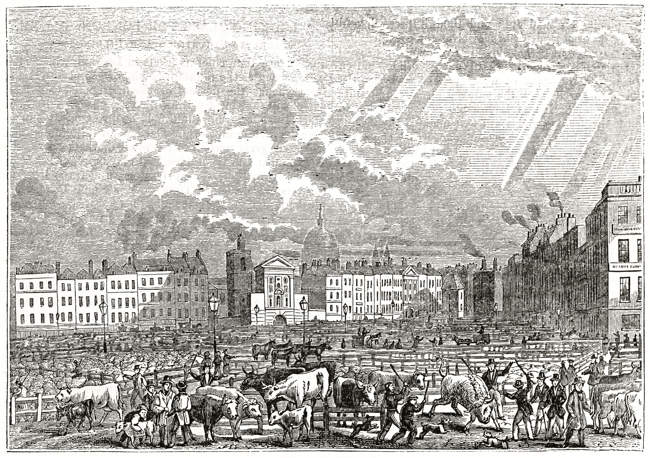 Adding to the confusion, until the mid 1800's, cattle were driven through the streets of Victorian London, to and from the slaughter-houses that could be found in Smithfield.