You are here: Articles -> Victorian England -> How to Decorate a Period Victorian House

How to Decorate a Period Victorian House

Although the Victorians are remembered for being austere and a little straight-laced, Victorian architecture seems to totally contradict that notion.

Some of the loveliest homes in the United Kingdom were built in the Victorian era, when quality workmanship and craftsmen's skills allowed for individual detail and bespoke designs on each Victorian house.

A typical Victorian house was built of red brick and had a slate roof with decorative stone detail in the brickwork and modest decoration on the outside.

As the Victorian era progressed, architectural styles developed. In the 1840s and 50s the Italianate style was popular, particularly in the interior. Inspired by 16th century Palladian mansions.

Houses at this time tended to be built with hipped roofs, pedimented windows and doorways, tall ground floor windows with larger panes of glass and decorative cupolas and balustrades were added particularly at roof level. Stucco was widely used to add a decorative finish to plain walls.

By the 1880s a heavy Gothic style was more evident and later still the Arts and Crafts Movement took hold, emphasizing the work of craftsmen. 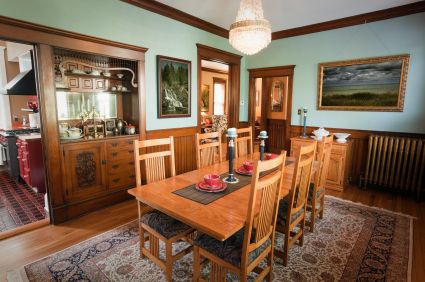 William Morris was a central figure and his home, Red House, at Bexleyheath typifies this style. It has a steeply pitched roof, deep porch, pointed window arches and brick fireplaces with a host of handcrafted woodwork within.

By the end of the Victorian era houses were lit by gas lamps and cellars were being used for storing coal for heating. Sanitation standards were raised with either an outside "privy" with proper drainage or an inside water closet, where the term "WC" comes from.

Small Victorian houses for workers were common in cities. Around Manchester terraced streets of "two-up, two down" houses still survive. They often had a shared back yard which led out to a service lane at the rear. In wealthier areas, fine detached family homes were built with bay windows, gingerbread trim around the eaves and steps up to an ornate entrance porch.

These fine homes were often decorated externally using different colours to pick out the detail. Dark blue, red, green and rich brown were popular colours. Brilliant white was not available at that time and those wishing to decorate a period Victorian house may want to consider cream which was more authentic to the period.

In the latter part of the Victorian age, gloss paint became popular as it was much easier to keep clean. Black gloss was popular on doors, window frames and exposed beams. Fence posts and finials were painted green to blend in with the foliage, or painted with a bronzing powder to give a high-class finish which can easily be replicated today.

If your Victorian house has a brick exterior then no painting is necessary and the brick should be left bare, but if the house has a stucco or rendered finish then a lime wash is the most authentic treatment for it. Use stone colours ranging from cream to sandstone. Picking out the architectural details with a contrasting colour is well worth the effort to emphasis the beauty of your Victorian house.