You are here: Articles -> Victorian England -> The Birth of Victorian Christmas Cards

The Birth of Victorian Christmas Cards

The annual tradition of sending Christmas cards came about almost by accident in 1843. Due to prohibitive costs the idea was slow to catch on and it was at least 20 more years before Victorian Christmas cards were commercially mass produced. 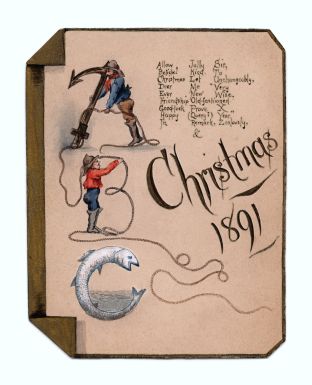 The first Victorian Christmas cards were designed by artist John Callcott Horsley at the suggestion of his influential friend Sir Henry Cole, who was the first director appointed to the Victoria and Albert Museum.

These Christmas cards were a limited edition, produced by Jobbins of Warwick Court in London and printed using a process called lithography.

The outlines then had to be hand-coloured by a professional colourer.

They were sold for a shilling each, which incidentally was far more than the daily wage for many Victorian workers at that time.

The first Victorian Christmas card measured just over 5x3 inches and in the centre was the sketch of a merry family feasting, with two scenes of charity on either side: feeding the hungry and clothing the naked. The single sided card was finished with a printed greeting, "A Merry Christmas and a Happy New Year to You".

Other picture makers followed suit but the idea of Christmas cards only really blossomed when Charles Goodall & Son began to mass produce them in 1866. He was a publisher of visiting cards, which were commonly used when a person paid a formal call and left their card as a reminder of their visit.

Goodall expanded this idea to four designs of Christmas cards designed by C.H. Bennett which featured holly, mistletoe and robins with a cheery Christmas greeting. Surprisingly for a Christian event, early Victorian Christmas cards did not feature any religious reference at all.

In 1870, the Royal Mail reduced the cost of postage to a half penny per ounce and cheaper colour lithography was developed to lower printing costs. This heralded the spread of the Victorian Christmas card and by the early 1870s the custom had also become popular in America.

Soon artists, printers, engravers and writers saw the potential and by 1880 they began to be commercially mass produced. One London print firm, S Hildesheimer & Co, ran a competition in 1881 for the most artistic designs.

Many great artists submitted their designs hoping to win a share of the generous prize of five hundred guineas. Poems and flowery greetings were written and the era of the Christmas card finally dawned.

From 1866 to 1895 Marcus Ward & Co monopolized the Christmas card market with their lithographed cards designed by noteworthy artists such as Kate Greenaway, Thomas Crane and his son Walter. They featured cute Victorian figures, snow scenes, cherubs and naked angels in typical Victorian style. Many of these designs have been reproduced in later years and Victorian Christmas cards remain very collectible.

They began to be sold by booksellers and stationery shops in the 1880s and then expanded to tobacconists, toy shops and even drapery shops. However, by 1895 many publishing firms of early Victorian greeting cards were forced out of business in London as more affordable German-produced Christmas cards flooded the market.