Victorian Dresses and What was Beneath

Victorian dress was traditionally very elegant and lavishly trimmed with all manner of lace frills, braid, fringes and full gathers. 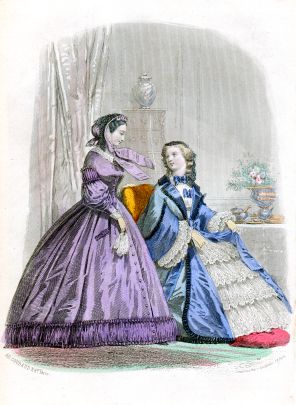 Full skirts were supported on a rigid frame called a crinoline and later bustles at the rear were the height of Victorian fashion for well-to-do ladies.

However, prudishness still governed the covering of a lady’s arms and legs right down to the ankle.

Beneath the full skirts, which themselves may have had at least three yards of fabric, were numerous petticoats and layers of undergarments.

By contrast, bodices were worn tightly fitted. Laced corsets, like straightjackets, were used to give women a narrow waist and shapely body, contoured further by the addition of whalebones and steel inserted into the bodice.

No wonder Victorian ladies were prone to fainting, either from the heat of so many layers, or from the inability to breathe!

Victorian dresses were finished with several layers of under sleeves beneath the wide dress sleeves of the 1850s and trimmed with fine lace or other detail.

An additional collar would finish the dress. Everything would have been handmade for the wearer by a tailoress or dressmaker.

To complete the outfit when venturing outdoors, Victorian dresses were topped with pelerines, which were short capes or sleeveless jackets, often made of fur. They were finished with long pointed ends at the front.

In summer, ladies would carry a fan or parasol and hats and gloves were always worn. In winter, fur muffs kept hands warm and pretty silk summer bonnets were replaced with felt hats. Hats were generally trimmed with yards of ribbon and artificial flowers were used for decoration.

A Victorian lady would always carry a purse or reticule. They were usually made of beads stitched onto knitted fabric in pretty designs. The top would either be a drawstring or a metal clasp. 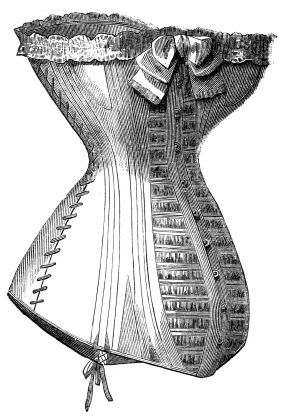 From 1865 Victorian dresses were influenced by French fashion. For afternoon visits to lady friends of similar social standing, three piece silk outfits were popular. The bodice was slightly less tight and a cape across the shoulders would have been in matching silk braid with a fringe or tassels for attractive movement.

These fancier dresses often had a wide ribbon belt to match from which long decorative panels fell down at the back. They were decoratively trimmed with ruched silk ribbon, silk braid and matching tassels or a fringe.

Instead of a full hooped skirt, later designs of Victorian dresses had most of the gathers and fullness at the back of the skirt, in what was known as a bustle. Often these fine afternoon dresses had a small train at the back which must have been most impractical to wear in the dirty streets.

In winter, beneath their full skirts ladies wore full length woollen petticoats. They had a drawstring waistband and a button at the back. Around the hem embroidery would finish the undergarment. Queen Victoria was known to have her monogram embroidered around the hemline along with thistles, roses and shamrocks. Thick silk stockings would have completed the undergarments of Victorian dresses.