With the advent of industrialization, Victorian houses began to change, as a result of the wealthier status of their owners. Victorian railways made it easy to have sumptuous furnishings or home embellishments delivered, so homes were beginning to reflect the wealth of the people who lived inside.

Victorian architecture was created between 1825 and 1900. It covered many styles, from Gothic Revival to Italian Renaissance to Second Empire. Lets look at some different sorts of Victorian houses:

Not all necessarily large, these Victorian houses were usually made of red brick and wood. With a design chosen from a basic pattern book, the new homeowner could then incorporate ideas from nature, geometry, or personal preference.

With the advent of nailing 2x4 boards together (frame construction) instead of using heavy timbers, the finished home was not as heavy. Thus, creativity could run rampant.

Different ideas from each style could be incorporated into the same building, so part of a Victorian house might be Gothic Revival, with a second floor showing signs of the Second Empire.

The homes which are seen today all have very similar features. Towers, bay windows, and balconies bring dimension to the building. A partial or full porch which sweeps around the first floor of the house adds depth.

The insides of these Victorian houses were opulent. Windows would be covered with heavy curtains. Wallpaper was all the rage, usually with a flower pattern. Rich, dark colours were the flavour of the day.

Carpets and rugs would decorate sitting rooms, bedrooms and the welcoming entrance hall. Rooms would be filled with well made over-stuffed furniture. Tables would be set in various corners, usually covered with photographs and nic-nacs.

Running water, gas lighting, and other amenities of life were present in these homes.

Although not on the grand scale of some of the homes of the period, terraced housing could be quite comfortable. Usually two rooms up and two down (although they could be bigger), these Victorian houses all shared a common wall with their neighbour. 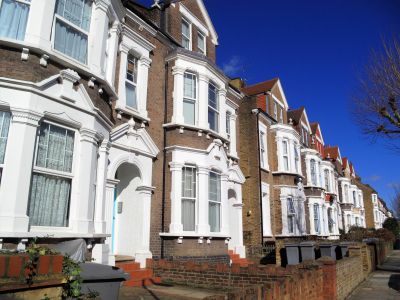 A front entrance was the norm, as well as a back entrance which would often lead to either a small garden, or a paved area. Each home would repeat the design of its neighbour, leading to this style also being called a 'row house'.

Some terraced homes would offer amenities. If you were well-to-do, you had an indoor toilet. Otherwise it was a shed in the backyard.

The largest room in this Victorian house would be the front parlour. Guests would be welcomed into this room, where items indicating your status would be displayed. For comfort, the family would use a back parlour for everyday living.

Not as grandly decorated on the outside as the houses of the wealthy, these terraced homes were for high-density living. Although some did become slums in industrial areas such as Victorian London, the majority of terraced living was clean and decent.

Although the word 'tenement' usually conjures a picture of housing for the poor, not all were that way. Tenement House, Glasgow is a lovely example of a tenement flat.

This particular apartment was situated on the first floor and came equipped with a range and bathroom. Containing four rooms, this typical flat featured a parlor and a kitchen. Not having a bedroom, the bed was recessed for additional space.

This abode is not by any means a typical Victorian house. In fact, in an era named after her, one of Queen Victoria's favourite homes did not look like a Victorian house at all:

Osborne House on the Isle of Wight was designed by Victoria's beloved husband, Albert. With the help of Thomas Cubitt (who was involved in building the main facade of Buckingham Palace), Albert made this home on the isle in the Italian Renaissance style.

With terraces on different levels surrounding the home, two towers overlooking the Solent, and magnificent gardens, Osborne House is more typical of a building to be found in Italy than England.

Transforming the main farmhouse and surrounding area, Osborne became the perfect private world for Victoria and Albert to 'get away from it all'.