The lives lead by Victorian children varied widely depending on the social standing and financial position of their parents:

Queen Victoria and Prince Albert had nine children. Their care was of paramount importance so they had nurses, doctors, household servants, tutors, and governors to take care of their every need.

Their clothing was of the finest quality, they learned etiquette, their slightest sniffle was investigated and good food was a daily staple.

Days were filled with lessons, but there was time for play and leisure activities.

Their homes had spacious rooms, filled with furniture and toys. Beds had clean linen, and play things would be scattered about.

The Well To Do

The lifestyle of Victoria and Albert's children was similar to the lifestyle all Victorian Children of the upper and middle class enjoyed.

Wants were taken care of almost immediately. Girls honed their home-making skills while boys would learn either estate management or financial procedures.

Dances and other group gatherings would happen on a regular basis. "Well to do" Victorian Children enjoyed travel, with either trips to the seaside or to The Continent. Pocket change was available for any small personal purchases. 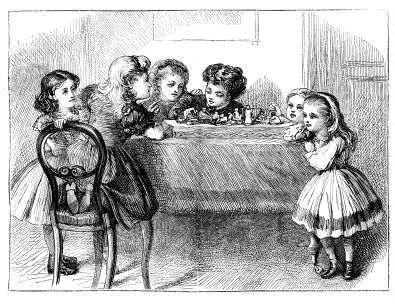 Victorian toys for these children were expensive. Rocking horses with real hair and doll's houses full of beautiful furniture would occupy young girls for hours. Wax dolls and elegant tea sets would often be set up in a corner of the bedroom.

Boys would have elaborate train sets. Toy soldiers and marbles would be scattered about the floor. Checker boards and chess sets could be easily reached.

The Down and Out

On the other side of the coin, poverty was a way of life for many Victorian children. There often wasn't the time or energy for play. Food was whatever could be found, scraped together, or stolen. Starvation and cold were facts of life.

Clothing most often came from trash barrels, or was purchased with whatever few coins a person had on hand. Sniffles would be allowed to grow into colds. Ill health was often cured only by death as the poor could not afford medical care.

Although perhaps not played with often, Victorian toys were available for a bit of joy. Boys would use yo-yo's, tin soldiers, and toy drums. Marbles were popular.

Girls would make their own dolls from bits of rags and buttons. These dolls would be loved just as much as the wax dolls available to the wealthier little girls. A hopscotch game could be held at a moment's notice.

If toys couldn't be found, rolling a hoop down the street would use any energy which was left over from a day of work. Games of hide-and-seek and Blindman's Bluff would be enjoyed by groups of children.

Working for a Wage

Children were expected to help supplement the family budget and were sent to work quite young. These weren't gentile jobs, they were manual labour paying extremely low wages.

Factories employed the young to crawl beneath huge machinery - into spaces which adults were too large to enter. Long hours of drudgery would be the order of the day, often starting before dawn and continuing after dark. Conditions were unsafe. Children who crawled beneath working machines were often killed. 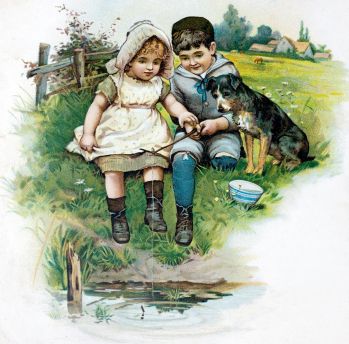 Coal mines wanted children to open and close ventilating doors. Until the middle of the 1800's, children as young as five would often work up to 12 hours a day underground, often barefoot.

If not employed in a business, youngsters would roam the streets looking for work. Being a messenger was a 'clean' job, as was selling flowers. Others would polish shoes, sweep front steps, or become chimney sweeps.

Some poorer Victorian children found that criminal activities made their lives easier. Pickpockets were everywhere. Snatching food off food-vendor's carts and quickly running away was often the only method of getting something to eat.

Being without shelter, or parents, wasn't unusual. Parents were often unable to support their offspring. These children would be turned out into the streets to fend for themselves. Child abuse was a common occurrence, so many children would just run away.

If there was shelter, it was often in a tenement. These buildings would be filled with people of all ages, most often sharing single rooms. Disease was prevalent in these slum conditions due to the populations of fleas and rats.

Sanitation was unheard of, and running water was a luxury few could experience. Water would come from an outside ditch. It was normal for these to be filled with raw sewage and dead animals.

By the late 1800's, it was widely felt that something needed to be done to help the poor. Homes were opened to help the youngsters who were roaming the streets. Laws governing the employment of children went onto the statute books.

However, nothing happened quickly. Although a start had been made, the lifestyle of destitute Victorian children did not see any major improvement until the early 1900's.