"The clothes make the man" is a phrase that could have been coined during the Victorian period. Victorian clothes were very much a symbol of who you were, what you did for a living, and how much money was in your bank account.

For Men and Woman

For the wealthy, silk stockings covered the legs. For the less wealthy, it was wool socks.

Beachwear in Victorian times consisted of a costume which covered the entire body with yards of material. There were exceptions though - arms could be bare from the elbows down.

Ladies had to have their legs completely covered. This was either done by wearing black stockings or, later in the century, trousers.

Men were able to show their shins.

Bathing bonnets were worn by both.

Good quality leather shoes could always be made-to-order, but by 1850 manufactured shoes were available for purchase. Shoes were now made for the 'proper' feet.

Etiquette played its part in Victorian clothing. It was considered 'good etiquette' to dress appropriately to ones age, and position in society. 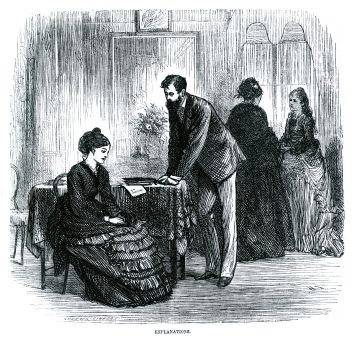 To own an umbrella was a social-scale barometer. The wealthy owned their own bumbershoots, while the general public would rent an umbrella if the weather turned wet.

Victorian dress was not complete without a walking stick, or cane. Some canes contained compartments which were useful for holding vials of perfume.

Victorian fashion did include eyeglasses, But, they were strictly for looks and not for the correction of vision. Often, if there were lenses in the frames, those lenses were removed and the empty frames would become part of the ensemble.

Although the cloth for Victorian era clothing was manufactured, ready-made outfits were unknown. Seamstresses and tailors were responsible for custom-made creations. Milliners, glovers, and hatters would help to complete the look.

If the pocket-book didn't allow such individual attention, families would make their own Victorian clothes or find used garments.

The poorer members of society would visit second-hand, even third and fourth-hand, shops for garments which still had some wear in them.

Throughout the Victorian era, fashion changed dramatically. Skirts went from straight to being spread over large hoops. At the end of the era, the hoop disappeared from view and it was back to slimmer skirts, although now sporting a bustle.

Head gear was a style all its own. From large lavishly decorated hats, covered with feathers and flowers, the close-fitting bonnet was soon the need-to-have garment. Not that these were any plainer - feathers, lace, and flowers would still be used for decoration.

There was a constant, though; the corset. The design throughout the era would change, but the initial purpose never varied. To wear Victorian dress, it was necessary to have a cinched-in waist.

For younger ladies, having a waist in inches the same as your age was the goal. Seventeen years old? That meant you would strive for a seventeen inch waist. Older ladies were allowed more leeway.

The baring of the shoulder and upper part of the chest was strictly for evening apparel, and most usually this style was worn by upper and middle class ladies. Working-class women were more modest. Because of the exposure of flesh to cool air, shawls joined the Victorian costume.

Satins, silks, and heavy velvets for the older generation were the norm. For younger society ladies who were on the look-out for "a good catch", the lighter the material, the better.

Fragile gauze dresses, covered with bows or flowers, were made to catch a prospective husband's eye. On average, these dresses were worn only once or twice... and then thrown away!

Middle-class women bought either garments, or ready-made clothes, with the idea that they would last. If necessary, the garment would at some point be cut-down so that it could be worn by children.

For the well-dressed female tradesman (aka "monger"), a bright silk scarf would be worn around the neck, and a flower-strewn bonnet would adorn the head. Brightly polished boots would be proudly shown beneath a many petticoated skirt, which just reached to the ankles.

Victorian dress didn't go in for such radical changes with men. But coat lengths did vary over time and the cinching of the waist (yes, men would wear a type of corset) gave way to the ease-of-breathing loose jacket.

Men's fashion history can be traced via the style of trousers. Early in Queen Victoria's reign, legs were covered in tight form-fitting cloth. This appearance soon changed to a looser tubular style. Straight slacks, with a crease in front and back, were common by the end of the century.

The elegant dress-coat for the day slowly gave way to a long frock coat, usually black. The dress coat did continue to make appearances, though. 'White tie and tails' was the formal eveningwear for gentleman, the 'tails' being the former daytime coat.

Games and cycling were the major catalysts for any change in male Victorian clothes. By the late 1800's, knickers were introduced and a more casual style was adopted for daytime wear. Plaids and checks were seen more often, although most often in the country.

Like his female counterpart, a male monger would wear a bright silk scarf around his neck. Atop his head would be a closely fitting cap which completely covered his hair. A long waistcoat and seamed trousers would complete his Victorian costume, ending with the sight of polished boots.