You are here:  Attractions -> Things to Do in Greater London -> Houses of Parliament

The Houses of Parliament, otherwise known as The Palace of Westminster, stands on the site where Edward the Confessor had the original palace built in the first half of the 11th century. In 1547 the royal residence was moved to Whitehall Palace, but the Lords continued to meet at Westminster, while the commons met in St. Stephen's Chapel. Ever since these early times, the Palace of Westminster has been home to the English Parliament.

In 1834 a fire broke out which destroyed much of the old palace, all that remained was the chapel crypt, The Jewel Tower and Westminster Hall. It was Lord Melbourne, the Prime Minister, who saved the great hall by arranging for the fire engines to be 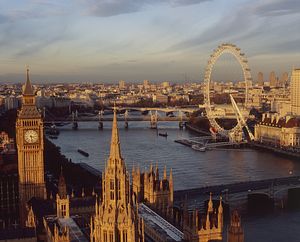 brought right into the hall and personally supervising the fire fighting operation.

The magnificent Gothic Revival masterpiece you see today was built between 1840 and 1888, this was the work of Charles Barry who designed the buildings to blend with nearby Westminster Abbey. The two imposing towers, well known landmarks in London, are the clock tower, actually called St. Stephen's Tower, but more commonly known as Big Ben - (the name of the after it's thirteen ton bell within), and Victoria tower, on whose flag pole the Union Jack flies when parliament is sitting. Much of the Victorian detail of the interior was the work of Barry's assistant Augustus Pugin.

Entrance to Westminster Hall is permitted only as part of a guided tour, otherwise it can be viewed from St. Stephen's porch above. The hall measuring 240 feet by 60 feet has an impressive hammerbeam roof of oak and is one of the most imposing medieval halls in Europe. In this noble setting coronation banquets were held until 1821. It was used as England's highest court of law until the nineteenth century and it was here that Guy Fawkes was tried for attempting to blow up the House of Lords on 5th November 1605. The statue of Oliver Cromwell, which stands outside the hall, reminds us it was here in 1653 that he was sworn in as Lord Protector.The route to the upper and lower houses takes you through the huge wooden doors into St. Stephen's hall. The vaulted ceiling and murals were designed by Barry to replicate the medieval chapel where the commons met until 1834. From here 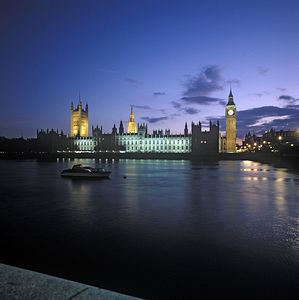 you are ushered into the well known octagonal Central Lobby, whose tiled walls are inscribed with Latin mottos. This is the central meeting place where constituents can meet or "lobby" their Members of Parliament. It is from here that you will be shown your direction either to the House of Lords or Commons.

An incendiary bomb destroyed the House of Commons in 1941. A reconstruction of Barry's original design for the house, taken from St. Stephen's chapel, the commons old meeting place, was completed in 1950. The seating arrangement in the house is reminiscent of choir stalls, the members of the cabinet sit on the front benches while opposition senior members sit directly opposite. The distance between the benches marked out on the floor in red lines, is exactly two sword lengths and one foot apart. Members are not allowed to cross these lines, thus ensuring that debates are kept orderly. In the centre of the floor stands the Table of the House, on which the mace is placed at the start of each parliamentary sitting; this is the Speaker's sceptre. The speaker of the house presides over sittings, keeping order.

The House of Lords decorated in scarlet and gold has all the grandeur one would expect in this chamber. This is where Her Majesty the Queen comes to open Parliament each November. Placed beneath a regal canopy, the gold throne which dominates the house is where the Queen sits to deliver the traditional opening speech. The Lord Chancellor sits opposite, on the famous Woolsack, this is a large scarlet cushion filled with wool, a tradition dating back to the middle ages when wool was England's largest export.

Days Out near Houses of Parliament

Places to Visit near Houses of Parliament