Many people live in Victorian homes and those wishing to retain its period features or reinstate some of its historic charm should consider installing Victorian bathrooms. 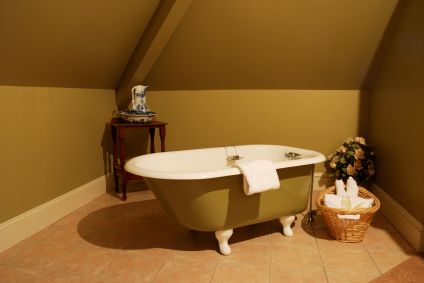 The latest designs can be found in reproduction baths and bathroom fittings which have all the practicality of modern day plumbing materials, but finding an old Victorian bath at a junk yard and renovating it can be a very rewarding labour of love.

The History of Victorian Bathrooms

We have the Victorians to thank for making the connection between poor public health and unsanitary conditions.

Most houses built before or during the Victorian era had non-flushing water closets or "privies", often placed at the end of the garden for obvious reasons.

Chamber pots and non-flushing toilets in pieces of furniture were what most households relied on as Victorian bathrooms.

The Victorians developed municipal sewer systems to improve hygiene in the cities, but the flush system had yet to be developed.

Wall mounted water cisterns improved things but the early waste pipes allowed sewer gas into the house and some gases were known to ignite!

Thomas Crapper finally produced a valve and siphon system which was patented in 1891 and his company began to produce water closets for well-to-do Victorian homes which were emblazoned with the company name "T. Crapper, Brass and Co". During World War I, American soldiers stationed in England used the name "crapper" as a slang expression for the toilet and his name became immortalized for ever.

In 1885 Thomas Twyford (another name which is synonymous with bathrooms) developed the vitreous enamel toilet bowl and the sanitary flushable toilet was born.

Previously, Victorian homes had no need for a dedicated bathroom but a dedicated space was now required for the water closet. Dressing rooms were often converted to create cramped Victorian bathrooms for the household to share.

By the end of the 19th century the idea of having a bathroom, complete with washstand and a bath, became popular and by the early 20th century (just 100 years ago!) bathrooms became a standard feature in newly built houses.

Nothing characterizes Victorian bathrooms better than a freestanding claw foot bath tub with its curved legs. Once you have your chosen reproduction or refurbished Victorian bath, consider its position.

Placing it under a frosted window adds to the ambience of a bubbly soak, but closest to the existing plumbing will be the most economical place to install it.

Taps are available in many faux Victorian styles with ornate contraptions resembling old telephones with an antique bronze or chrome finish. The hand held shower spray can be useful for bathing children or cleaning the tub.

Surround the bath with Victorian style tiles in rich colours - dark green, blue, mustard or claret will add to the ambience. For vanity units and under sink cupboards use rich cherry or deep walnut wood (or a suitable stain) to maintain the Victorian look.