You are here: Articles -> British Kings and Queens -> Queen Victoria 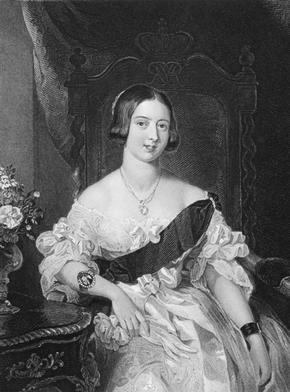 Her reign was known as the Victorian Era and lasted for more than 63 years, which exceeded that of any previous British monarch, including the current long-reigning Queen Elizabeth II.

Queen Victoria ruled during the Industrial Revolution and saw the powerful British Empire extend its influence around the world.

Victoria and her husband Albert also left a lasting legacy in the many monuments, museums and architecture which still remain today.

Victoria was born at Kensington Palace in 1819. Her father was Edward, the Duke of Kent and her mother was Princess Victoria of Saxe-Coburg.

She was well connected with royalty as her grandfather was King George III and her uncle was King Leopold of Belgium.

She was named Alexandrina Victoria in honour of her godfather, Tsar Alexander II of Russia.

Victoria's father died when she was just 8 months old, and thereafter her mother shunned the royal court of Victoria's uncles, George IV, who reigned from 1820-1830 succeeded by his brother, William IV, from 1830-1837.

Instead, the father figure in Victoria's young life was Sir John Conroy, a close friend of her mother.

William IV had no legitimate heirs and his main fear was that he would die leaving the throne to Victoria but Conroy would be the power behind her. 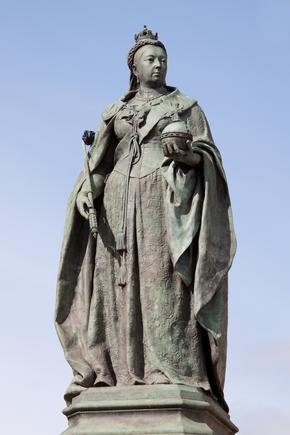 Statue of Queen Victoria in Birmingham

Victoria was wise and headstrong enough to have Conroy removed from the court, relying instead upon the advice of Lord Melbourne, the Prime Minister who treated her like a daughter.

He tried to protect her from the harsh realities of life, even advising her not to read Charles Dickens' novel "Oliver Twist" as it dealt with paupers and criminals!

Although Victoria had no political power since the Reform Act of 1832, but she liked to be kept informed of political matters.

Victoria chose to make Buckingham Palace the main royal residence in London and it has remained so ever since.

Three years after coming to the throne, Victoria met and fell in love with Prince Albert of Saxe-Coburg and they were married in 1840.

Their marriage was one of great love and mutual admiration and they had 9 children: Victoria, Bertie, Alice, Alfred, Helena, Louise, Arthur, Leopold and Beatrice.

Albert became her main advisor and assisted her in her royal duties.

He had Osborne House on the Isle of Wight built for her and they spent time with their young family there.

They also visited the lovely Chatsworth House in Derbyshire and were entertained by the 6th Duke of Devonshire.

It remains an outstanding stately home to visit along with Drummond Castle in Scotland, another of their favourite places to relax.

Albert's interests in art, science and industry led him to organize the Crystal Palace Exposition in 1851.

It was hugely profitable and Albert designated the proceeds to purchase land in Kensington for the establishment of the Victoria and Albert Museum which is still the world's greatest museum of art and design, set in a magnificent Victorian building. The Natural History Museum and the Science Museum were established later. 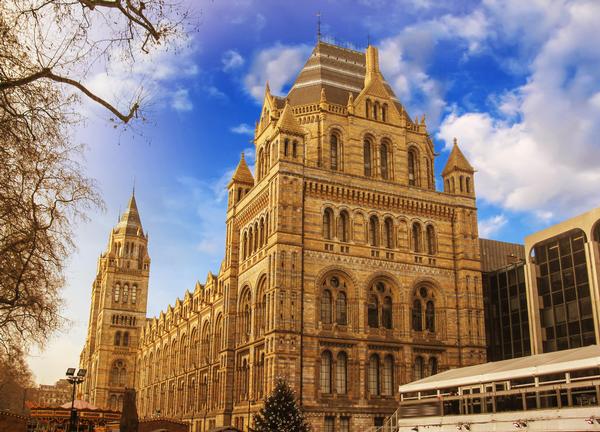 Following the resignation of Lord Melbourne, Victoria continued to work well with the next two prime Ministers, Sir Robert Peel and Lord John Russell but she disagreed with the Foreign Policy of Lord Palmerston as he sought to increase the powers of the British Empire at the cost of weakening and embarrassing other foreign governments, many of whom were close relatives of Victoria and Albert.

In due course Lord Palmerston himself became Prime Minister in 1855, a more difficult period for Victoria, for whom life was not always easy.

Victoria's mainstay in her life, Albert, died of typhoid fever in 1861 and Victoria withdrew from public life and spent much of her life mourning in the Scottish Highlands at Balmoral Castle, refusing even to attend the opening of state Parliament.

At Balmoral Victoria again sought an advisor and became close to a servant, John Brown. Rumour and speculation of the relationaship spread, diminishing her popularity but the abolition of the British monarchy remained just a dream of the more radical MPs.

The Liberal William Gladstone became Prime Minister in 1868 followed by the Tory, Benjamin Disraeli in 1874 who Queen Victoria heartily approved of. In return, he had her crowned Empress of India.

However, when Disraeli died in 1880, Gladstone was again elected to power, once again with strained relationships between himself and the Queen.

In 1885 the Marquess of Salisbury was elected Prime Minister and his imperialist views were much more in keeping with those of Queen Victoria herself.

Queen Victoria celebrated her Golden Jubilee in 1887 and this event seemed to bring her out of mourning and back to public life.

She spent her last days at Osborne House, her home on the Isle of Wight where she died in 1901 at the grand age of 82. She was buried at Frogmore, Windsor alongside her beloved Albert in a grand mausoleum which can be visited. Her son Edward VII (Bertie) succeeded her to the throne at the age of 60.