You are here:  Attractions -> Things to Do in Greater London -> London Canal Museum 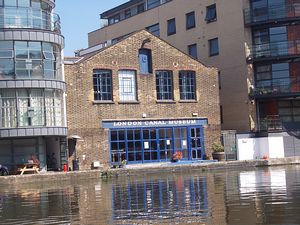 Discover London's colourful canal story at London Canal Museum, the capital's only waterways museum. We tell the story of how and why london's canals were built, and of the people who lived and worked on them in conditions that today would be considered appalling.

See inside the cramped narrowboat cabin and hear a dramatisation of a family's life. Look at the colourful folk art of the waterways and the equipment used to handle cargo.

Watch fascinating archive film of the Regent's Canal and see our Horse Power exhibition, telling the story of the working horse on the canals and streets of London in Victorian times.

The museum building was built as an ice warehouse in the 1860s for Carlo Gatti, restaurateur and ice importer. Two huge ice wells are under the ground floor and visitors can peer down into them through a fenced opening. There is an exhibition on the ice trade and ice cream. Hundreds of tons of natural ice, imported from cold Norway, were stored here before being delivered by cart around London. The Regent's Canal was used to bring the ice from the docks.

The main exhibitions in the museum are:

Water and Locks. Work a boat through a model lock and learn about how canals are designed and supplied with water

Canal life. The reconstructed narrowboat Coronis, mentioned above, is the centrepiece of this.

Costume - the clothes worn by the boat worker families.

The Bantam Tug, a canal maintenance tug, is on display outside. Visitors may also look at the colourful battlebridge canal basin when they go outside onto the wharf.

Lifting and handling equipment. In these days of machine power it is easy to forget how much heavy work went into moving cargoes of all sorts. See our collection of weighing and handling tools.

The ice trade and Carlo Gatti. Gatti's amazing life story is told and there is an interactive "talking head" that allows visitors to ask him questions.

The Regent's Canal. We tell the story of our home waterway in more detail, and show archive film of the canal in the inter-war years.

Horse Power. The horse was the motive power essential to both the canals and the ice trade. We look at the care of the horse and the massive infrastructure that supported horse transport. The 1904 horse ramp that was installed in the building can be viewed.

Boats and barges. Our display of models tells you something about the varied craft that used to carry our goods by water.

A free MP3 audio tour of the museum is available from the museum's website before you visit. Download a preview and then a tour of the exhibitions, that adds to, rather than duplicate, what we tell you in the museum. Use this on your own MP3 player.

The museum shop is the final port of call for most visitors. Here you will find London's best selection of canal books to browse, and a range of souvenirs for all budgets.

Days Out near London Canal Museum