You are here:  Attractions -> Things to Do in Greater London -> British Museum 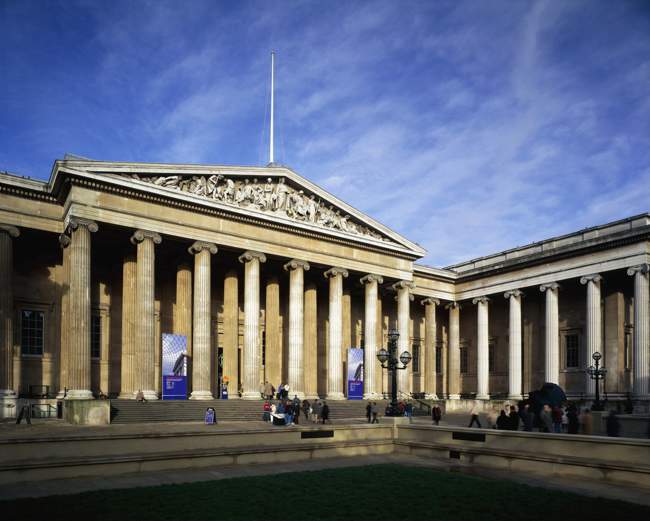 The British Museum was the first public museum in the world, and is still one of the largest, with a magnificent collection of more than 8 million artefacts from around the world.

About 80,000 of the most interesting and important objects are on display in the 94 galleries at any one time.

The British Museum is the oldest, and one of the largest museums in the world. Where else can you see some of the greatest treasures of all time under one roof?

The Education Department provides a wide range of services for adults and children. Other departments include: 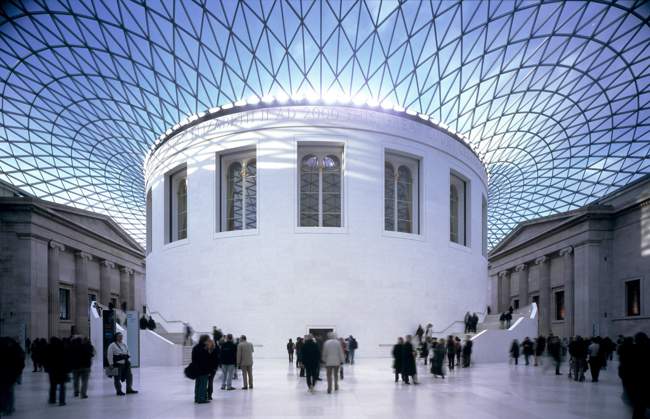 There are countless fascinating objects on display at the British Museum - here are just a few of the things you won’t want to miss:

One of the more controversial artefacts in the British Museum, the Elgin Marbles, also known as the Parthenon Sculptures were originally part of the Parthenon Temple in Athens.

They were removed by Lord Elgin in the 19th century with permission from the Greek authorities at the time. 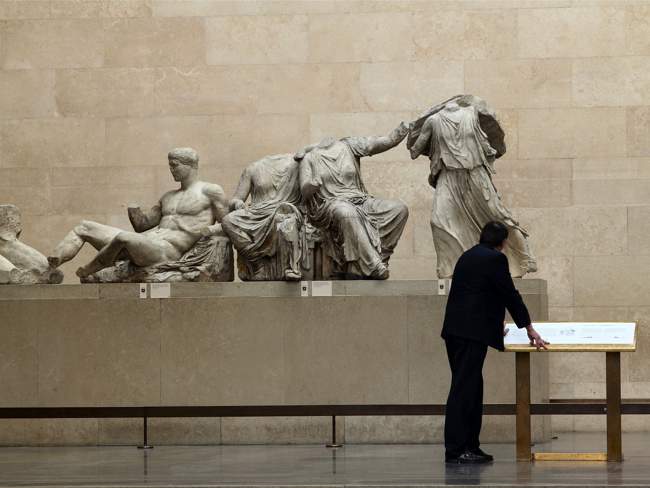 The sculptures have since been the subject of a high-profile campaign seeking to have them repatriated to Greece.

A spectacular collection of bronze sculptures made from the 16th century onwards in the West African Kingdom of Benin.

More than 100 of these beautiful artefacts are on display. Some depict contact between Benin and Europeans from as early as the 15th century.

© The Trustees of the British Museum

The Lewis Chessmen in Room 40

Made in the 12th century from Walrus tusks, and discovered on the Scottish island of Lewis in 1831, the Lewis Chessmen are one of the museums best known and most popular exhibits.

The Rosetta Stone in Room 4

One of the most famous and important objects in the museum, the Rosetta Stone is the artefact that unlocked the secrets of Egyptian hieroglyphs in 1822 and allowed us to begin to understand the culture and beliefs of ancient Egypt.

Discovered in 1939, the Sutton Hoo treasure is believed to have belonged to an Anglo Saxon king.

Highlights include the beautiful and ornate Ango-Saxon Buckle dating from the 7th century AD, and the Sutton Hoo Helmet made with great skill from iron and copper alloy.

Enlightenment Gallery © The Trustees of the British Museum

With so many amazing objects on display, it’s easy to find things that will fire your children’s imagination and curiosity.

Still, it doesn’t hurt to plan ahead - here are a few of our top suggestions:

Egyptian Sculpture Gallery © The Trustees of the British Museum

Bust of Ramesses the Great in Room 4

This enormous 7.5-tonne statue commemorates Ramesses II - one of the greatest pharaohs of ancient Egypt.

Mummy of Katebet in Room 63

Katebet was a chantress who lived more than 3,300 years ago. Yes, there’s a real body in there…

The Sutton Hoo Helmet in Room 41

There are only 4 complete Anglo-Saxon helmets known to survive. It was discovered in 1939 and dates back to 7th century Britain

You can also try the exciting Museum Missions on your smartphone - each one has five challenges to complete:

The British Museum website has a visitors’ trail with twelve objects they suggest that kids will enjoy.

Buggies and prams are permitted in the museum, but you must keep them with you at all times.

Baby changing facilities are available in the Great Court and you can breastfeed or bottle-feed anywhere within the museum, but there’s also a feeding room next to the changing space accessible from the Great Court if you prefer.

© The Trustees of the British Museum 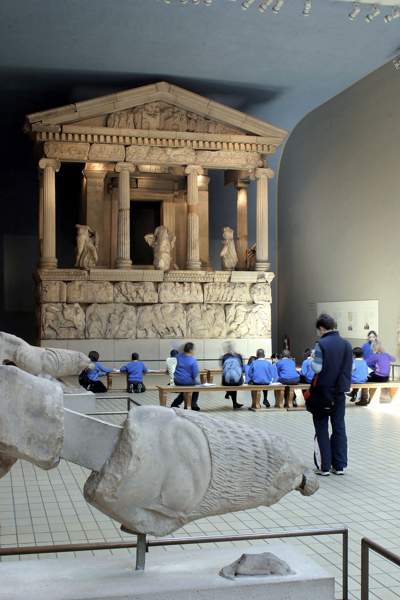 The audio guide desk is currently closed, but you can download audio guides to the museum from YouTube Music and Apple Music and listen to them on your own device.

Morning tours are available for visitors with disabilities.

Museum Explorer Trails provide an exciting way for families with children to explore the museum according to various themes: Trails are available focusing on Colour and Shape, Journey Across Japan, Ancient Britain, Africa around the World and Ancient Egypt. 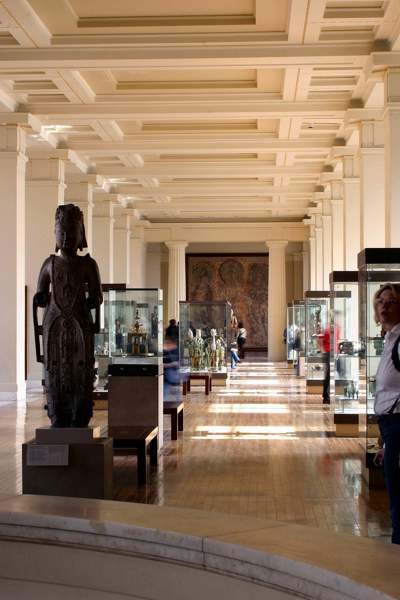 Paper copies of Museum Explorer Trails are not currently available in the museum but you can download and print the trails from the museum website.

You can also get a quick tour of the museum’s highlights by following this One Hour Tour or this Three Hour Tour.

Book a timed slot for your visit in advance. Concessions for paid exhibitions are available to disabled visitors, and a companion ticket is included free of charge.

There are also special morning tours available to disabled visitors.

Accessible toilets are available in the Great Court. There is currently no Changing Places toilet available, with the nearest being at Great Ormond Street Hospital. 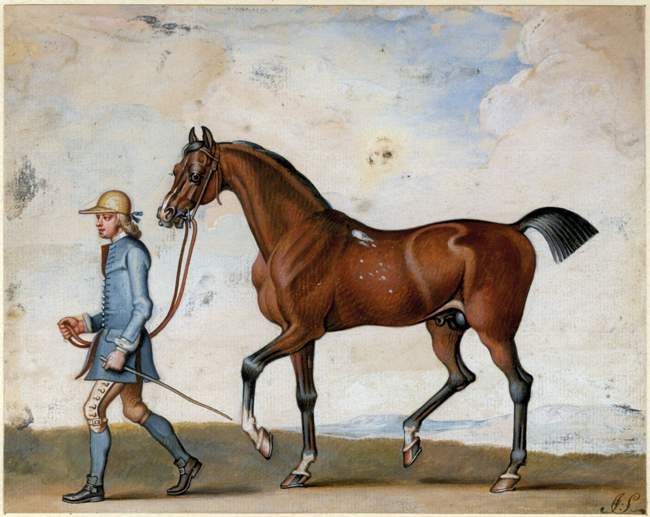 You can book Blue Badge Accessible Parking and find out how to borrow a wheelchair by contacting the ticketing team:

The museum website has a useful section on accessibility and includes information on quieter times and areas, lighting and temperature, how to borrow a wheelchair, assistance and alarms, access to galleries, seating and more.

If you have any questions about accessibility at the museum contact:

Great court © The Trustees of the British Museum

The Court Cafe in the Great Court is currently open and provides fresh salads, sandwiches, snacks and cakes as well as a range of hot or cold drinks.

There are several other cafe and restaurant spaces providing food within the museum, but these are currently closed. Please check the museum website for the latest information on reopening. 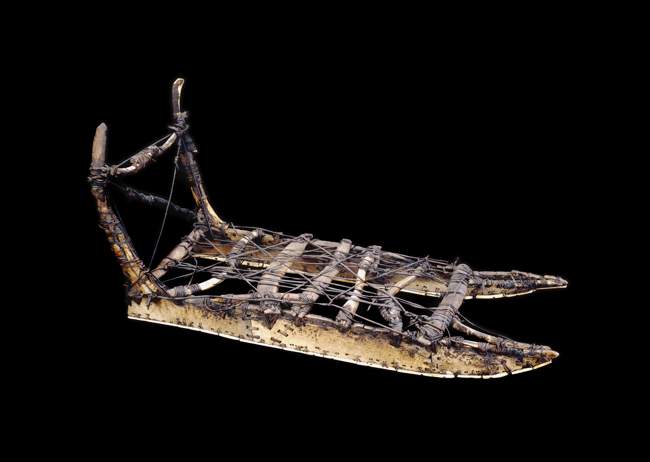 Sledge © The Trustees of the British Museum

An Act of Parliament

In 1753 the British Government of the day bought the collection of Sir Hans Sloane, a wealthy Doctor who practised in Chelsea.

The collection consisted of over 80,000 curios including fossils, plants, coins, medals and prints.

An act of Parliament established the British Museum as the world's first public museum. The Cottonian Library formed by the Harleys, Earls of Oxford, was immediately added to the collection.

In 1757 George II presented The Royal Library to the museum. In 1823 George III conferred on the museum the right to a copy of every book printed. This right continues to the present day.

By the 1800s, with the acquisition of enormous quantities of antiquities, artefacts, discoveries from all over the world and many bequests, it became apparent that more space to house the ever-growing collection was essential.

Kali striding over Shiva © The Trustees of the British Museum

In 1823 Robert and Sydney Smith submitted their designs for the new purpose-built British Museum. The work was carried out over the next thirty years and what emerged was one of London's most awe-inspiring buildings.

Designed in the Greek revival style, this magnificent building has an Ionic colonnade and portico complete with pediment frieze.

By the 1850s the site included The Great Court, in the middle of which was built the Round Reading Room, surmounted by one of the largest domes in the world. 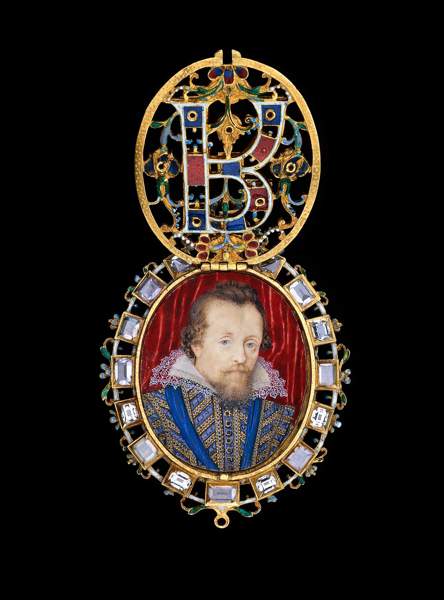 Removal of The British Library

Another major change to the museum took place when it was decided to remove the British Library from the Great Court to new purpose-built premises at St. Pancras.

This enormous undertaking began in the 1970s was not completed until 1998.

Once the British Library vacated the Great Court, the museum launched an architectural competition to re-design the space.

Foster and Partners were the winning architects, enclosing the enormous space beneath a spectacular glass and steel roof, creating the largest covered public square in Europe.

Q.  Can I leave luggage while visiting the British Museum?

A.  No, large items of luggage including wheeled suitcases are not permitted in the museum.

Q.  Can I take photos at the British Museum?

A.  Yes, you can take photos for your own non-commercial use.

Q.  How much does it cost to get into the British Museum?

A.  Entry to the British Museum is free of charge and always has been.

Q.  How old is the British Museum?

Q.  How many artefacts does the British Museum have?

A.  There are more than 8 million artefacts in the collection, with 80,000 objects on display at any one time.

Days Out near British Museum

Places to Visit near British Museum