You are here:  Towns -> Places to Visit in Greater London -> London Borough of Haringey

Things to do in London Borough of Haringey, Greater London 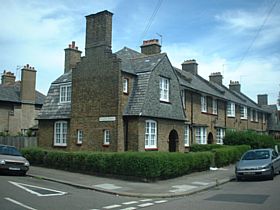 This is a picture of a house in the Tower Gardens Conservation & Article 4 area of Haringey N17. This area is full of small cottage garden terrace houses which are really quanit. This area is part of the London Open House © R Crowley

Haringey's diverse population means that half of all school pupils in the borough speak English only as a second language. In fact an estimated 193 languages are spoken throughout the borough.

The borough has some fine connections as writer Sir John Betjeman lived in West Hill and Karl Marx is buried in the Highgate Cemetery. Musician David Gray, and David Tennant of Dr Who fame have also lived in the borough.

Beautiful Alexandra Palace in Haringey was the birthplace of television. It was from there that the BBC broadcast the first regular TV service, back in 1936.

Haringey has a long history of settlement by foreign invaders with relics of prehistoric settlements along the River Lee. After the Romans and the Anglo-Saxons, the area was populated by wealthy aristocrats whose names live on in the fanciful streets names such as Barons Coleraine.

Times have changed and parts of East Haringey are now categorized as a deprived area with high unemployment. Government money has been earmarked for regeneration projects in various parts of the borough.

Despite this label, Haringey also includes some of the most prosperous areas in the country such as Highgate, Muswell Hill and Crouch End.

Wood Green hosts the International Short Film Festival each year in its Cineword Cinema, which attracts a large number of fans.

Football fans will know that Haringey is the home of the Tottenham Hotspur Football Club, which was the first British club ever to win a major European trophy.

One of Haringey's finest attractions is Alexandra Palace in the western part of the borough. It is the last Victorian Exhibition Hall still standing in Europe and hosts many national events. The Palace is linked to Finsbury Park by the Parkland Walk.

More then 25% of Haringey is green space including five ancient woods which are green oases within the city. Coldfall Wood, Bluebell Wood and North Wood are the most popular woodland areas and are protected local conservation areas. Highgate Woods is designated a Green flag status for its high standards.

The 600 acres of parks and open spaces provide an opportunity for plenty of outdoor recreation.

The famous Roman Road known as Ermine Street runs through Haringey and part of it is known as Tottenham High Road.

Bruce Castle, a delightful 16th century manor house in Tottenham is one of the main attractions in Haringey. It is one of England's oldest red brick houses with a flat roof and a lovely clock tower above the entrance. Inside it has a museum of local exhibits and archives. The house is said to be haunted by one of the wives of the Coleraine family.

Haringey has numerous bus, rail and underground services. It is served by many underground stations on the Piccadilly, Northern and Victoria lines.

more self catering near London Borough of Haringey...

Days Out in London Borough of Haringey

Places to Visit near London Borough of Haringey