You are here:  Towns -> Places to Visit in Greater London -> London Borough of Southwark

Things to do in London Borough of Southwark, Greater London 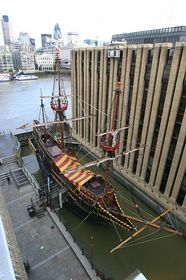 The London Borough of Southwark is situated directly opposite the City of London on the south bank of the River Thames. It is one of the boroughs which form Inner London.

Southwark Borough is the 10th smallest in London by area. It covers less than 29km and has a population of 245,000, making it one of the most densely populated areas too. The borough is 63% White and 37% of Black and Mixed Ethnicity.

In Southwark's schools, 43% of pupils speak English as a second language, and more than 100 languages are represented.

The Borough of Southwark proudly boasts it is London's most historic borough, as the ancient town of Southwark was where the Roman footbridge crossed to London. The London Borough of City of Westminster and the City of London may be older, but technically they have city rather than borough status.

Southwark's Shard building will be the tallest building in the UK when it is completed in 2012.

This ancient area of Southwark has had significant settlements for thousands of years. Bermondsey was known for its leather tanning and Rotherhithe was the centre of London's seafaring and ship building industries.

Dulwich continues to be a centre of learning at Alleyn's School and Dulwich College.

Bankside was known for its theatres, including Shakespeare's Globe Theatre and the Rose Theatre, and it was a notorious red light district. Southwark had several prisons such as the Clink, the King's Bench and Marshalsea. With a rich mix of immigrants, the borough of Southwark has evolved as a borough of great ethnic and cultural diversity.

The Borough of Southwark has many historic churches and a number of historic public houses. The Tabard Inn features in Chaucer's Canterbury Tales and the George Inn and the White Hart also have historic connections.

Modern buildings of note in the London Borough of Southwark include the Tate Modern, housed in the former Bankside Power station; prize-winning Peckham Library and Southwark Cathedral which dates back to 1220. It is the oldest Gothic Cathedral in London and has monuments of historic figures as well as a fine organ.

In contrast, the modern City Hall, said to resemble a stack of CDs, has regular London-themed exhibitions as well as housing the Greater London Authority.

The Clink Prison Museum shows the harsh reality of gaol life in Elizabethan London . Other Southwark museums include the Old Operating Theatre Museum, the Imperial War Museum and the Livesey Museum for Children. Nearby is the recreation of Drake's Golden Hind Galleon in which he circumnavigated the globe.

The reconstructed Globe Theatre is a fascinating place to visit with its open-air amphitheatre set around the stage.

HMS Belfast is now moored on the Thames in Southwark and visitors are allowed on board. The Millennium Footbridge is now a well-known attraction as well as providing a useful link with the City.

Finally, the OXO tower has many shops and restaurants and the famous Borough Market is also worth a visit to buy cheese, vegetables and other fresh local produce.

The London Borough of Southwark has several underground stations on the Northern, Bakerloo and Jubilee Lines. There are also several railway stations, served by trains on the East London line.

Images of London Borough of Southwark 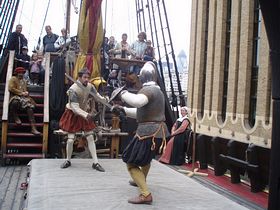 more self catering near London Borough of Southwark...

Days Out in London Borough of Southwark

Places to Visit near London Borough of Southwark