You are here:  Attractions -> Things to Do in Greater London -> L. Ron Hubbard's Fitzroy House


Set in the heart of Fitzrovia, famed for its writers and artists, Fitzroy House was built in 1791 shortly after development was undertaken of this area. The original interior and current exterior imitate the designs of Robert Adam, celebrated Georgian-period architect.

Fitzrovia dates back to the 18th century and has been for many years well known for its writers and artists. From H.G. Wells and George Orwell, to Charles Dickens and Virginia Woolf - its inhabitants have left an indelible mark.

Although it is well known that the Irish playwright George Bernard Shaw resided in Fitzroy Square, it is a lesser-known fact that he also lived on the 1st floor of 37 Fitzroy Street from 1881-1882.

75 years later, writer and philosopher L. Ron Hubbard made 37 Fitzroy Street his London base. Mr. Hubbard wrote many of his best-known works whilst in London. With a number of New York Times bestsellers and the Guinness Book of World Records Title for most published author, he was one of the most prolific writers of his time.

However, L. Ron Hubbard cannot be so simply categorised. Whilst first and foremost a writer, he worked as a professional in over two dozen fields including photography, horticulture, sea captaining, music making and exploration. All this was in addition to his work in the humanitarian fields of drug rehabilitation, criminal reform and education. 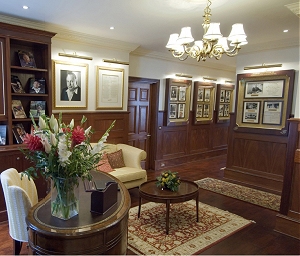