You are here:  Attractions -> Things to Do in Greater London -> St Bride's Church 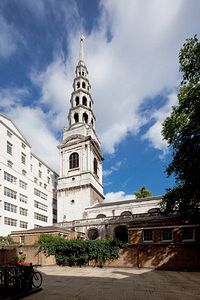 There are places where history passes by with a step as light as gossamer, leaving no trace. St Bride's 'the cathedral of Fleet Street' is not one of them. This site spans two thousand years' development of an island people. Little of importance that has happened in England's story has not been echoed in St. Bride's. From the time when the Romans invaded, Celts, Romans, Angles, Saxons, Normans, so many peoples, made this place. Today in the exchange of news, it is parish pump to the world.

For seventeen years after a wartime bomb had left the church a smouldering shell, Fleet Street had only a makeshift in place of the church it had always called its 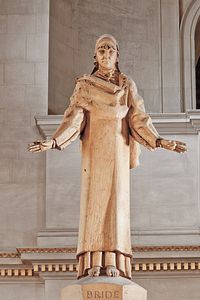 own. But there was a dramatic reward for this deprivation. For restoration meant excavation and this gave the archaeologists, led by Professor W.F. Grimes, the chance to explore. As a result of their efforts nearly a thousand years were added to St. Bride's known history.

The second century Roman pavement marks one of the earliest places of Christian worship in this country, and there has been a church here since the sixth century. The crypts, in which much of this history can be seen, are visited by people from all parts of the world.

In this place the Romans dug a ditch soon after they reached Londinium and it is now one of London's earliest known Roman remains. Here was a mysterious second century building, here was a Christian church fourteen centuries ago, here happened the miracle of the transformation of print from mediaeval 'mistery' to a mind moulding mass communicator, here grew up England's theatre, here congregated the English men of letters, here was fought the battle for freedom of speech, here nothing human has been alien and all that is divine has been cherished.

Here, where many generations have left a distinctive mark, is an epitome of the story of man and more especially of his growth as a creature who communicates. The present church, the eighth on this site and a restoration of Sir Christopher Wren's building, was rededicated in 1957 in the presence of Her Majesty the Queen and His Royal Highness the Duke of Edinburgh. 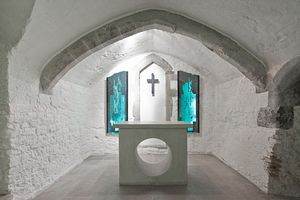 Days Out near St Bride's Church