You are here:  Towns -> Places to Visit in West Sussex -> Felpham

Things to do in Felpham, West Sussex 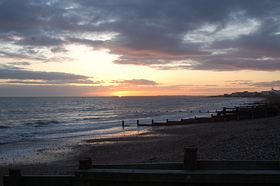 Felpham, pronounced "Felf-fm" by locals, is a small coastal village of around 10,000 people in West Sussex. It is a village in its own right but is adjoining the larger town of Bognor Regis.

Felpham's most famous resident was probably William Blake who lived in the village for a time. No doubt his epic poem was inspired by the lovely countryside surrounding the village. This poem is better known as the stirring words of the anthem Jerusalem.

Blake's cottage is close to the The Fox public house in the village and was where he had an argument with a drunken trespasser, John Schofield. Blake was charged with assault and treason for apparently damming the king, but he was acquitted at his trial in the Chichester assizes.

Felpham was also the home of writer William Hayley, who actually turned down the offer of poet laureate in 1790.

Felpham stands on the scenic coastal road, the A259, which trundles along the south coast between Havant, in Hampshire to Folkstone in Kent.

The village has a Norman parish church dedicated to St Mary which dates back to the 16th century and a Methodist Chapel. The Memorial Hall was built in memory of those killed in World War I and continues to be the focal point of church and village activities.

The village has a post office, and a good cross-section of local shops, pubs of great character and several restaurants.

Blake's cottage is now a Grade II listed building in the centre of the village, along with a collection of other cottages along Felpham Road, Felpham Way and Blake's Road.

The Manor House on Limmer Lane and St Mary's Church and church wall are all listed buildings, along with the George Inn and the old K6 telephone kiosk outside the Post Office, which was installed sometime between 1935 and 1968.

Although Felpham has a historic village centre it rapidly expanded after 1930 with the addition of three gated housing estates and various newer estates towards neighbouring Middleton-on-Sea.

Felpham Community College is the main school, fed by three infant and junior schools in the area. Next door to the college is the Arun Leisure Centre and there are several sports pitches for local teams. The recreation field is known as the King George V field and is well used by the Felpham Colts Football Club teams.

This active community also has one of the oldest English Country Dance Clubs in the country, which was founded in 1933 and helped to keep spirits up during World War II.

Things to do in Felpham

The shingle beach (with lots of sand when the tide is out!) offers plenty for visitors to enjoy on a visit to Felpham including sunbathing and watersports. The more commercialised activities of Bognor Regis are just two miles west.

The village is close to the South Downs for scenic walking and enjoying the local flora and fauna. For golfers, the Littlehampton Golf Club is six miles away and is the oldest club in West Sussex.

For a taste of Roman history, visit the Fishbourne Roman Palace with its magnificent floor mosaics which are over 1600 years old. The Weald and Downland Open Air Museum has a fine collection of historic buildings along with exhibits of rural life in West Sussex from times gone by.

Days Out in Felpham

Places to Visit near Felpham