You are here:  Counties -> Things to do in Dorset 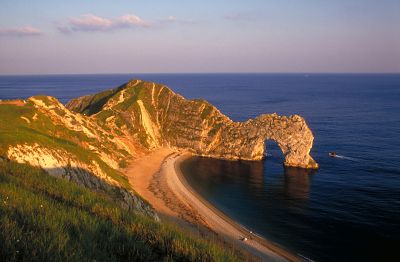 Dorset is situated on the south coast of England, between Devon in the west and Hampshire in the east - much of the County is designated an Area of Outstanding Natural Beauty.

Few major roads run through the county, allowing Dorset to retain much of its rural character and charm.

Dorset is a delightful county, with a variety of contrasting landscapes, consisting of coastline with high cliffs, inland there are wooded hills and fertile valleys, rolling chalk hills and wild heath-land.

There are several interesting towns along the coast, starting in the east at Christchurch, a Saxon town on the estuaries of the Rivers Avon and Stour, with a picturesque harbour and magnificent 11th century Priory Church.

Bournemouth is a vibrant city, with beautiful sandy beaches, gardens, shopping, night life and entertainment for holiday makers. Poole has the second largest natural harbour in the world after Sydney - you can explore the old quarter by the quayside, with many historic buildings. 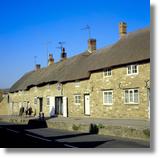 'The Isle of Purbeck' is a coastal peninsula below Pool harbour. The towns of Wareham, encircled by its original Saxon walls and home of the oldest church in Dorset, and Swanage, a seaside resort and home to the famous local Purbeck stone often referred to as 'marble', are worth visiting. Nearby, the historic village of Corfe Castle is a beauty spot not to miss.

Weymouth is a popular seaside town with many interesting family attractions. Bridport also has a Dorset Tourist Information centre - the town is known for rope and net making and still makes tennis nets for Wimbledon, the All England Tennis Club.

Portland is connected to the mainland by a causeway at the eastern end of Chesil Beach, a barren pebbled beach, stretching from Weymouth to Bridport. In the hills behind the Chesil Bank, the old village of Abbotsbury is famous for the 600 year old bird sanctuary, Abbotsbury Swannery. Portland is the origin of the stone used by Sir Christopher Wren for St. Paul's Cathedral and for the UN headquarters in New York. 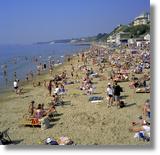 West Dorset's coast is known as 'Jurassic Coast' - it has been awarded World Heritage Site status, and consists of rocks formed during the Jurassic Period. This 25 mile stretch is fossil hunting country, with the beaches around Charmouth and Lyme Regis being the best places to hunt for fossils. Call at the tourist information centre in Lyme Regis for a guide to the area.

Lyme Regis is a charming historic town set on cliffs overlooking a spectacular bay with a 13th century harbour known as 'The Cob'. On a visit to Lyme Regis, Jane Austen was inspired to make it the setting for 'Persuasion', it was also the setting for John Fowles book 'A French Lieutenants Woman'.

Inland, large areas of Dorset are designated as Areas of Outstanding Natural Beauty, such as the Blackmore Vale in the north of the County, a delightful rural area with a lush landscape, with many footpaths and bridal ways. The Dorset Downs in the centre of the County consists of chalk hillsides and, to the south, ancient woodland.

At Cerne Abbas, you can see the Cerne Abbas Giant, carved into the chalk hillside. Cranborne Chase, was once a royal hunting forest, where the deer can still be spotted and native wildlife and plants flourish.

Other towns of note include:

Georgian town on the banks of the River Stour, with a fine church and town hall and host to the Great Dorset Steam Fair each September.

Dorchester is the County town, where you can still see the remains of the original Roman town wall. Dorchester is at the heart of Thomas Hardy country - his birthplace at nearby Higher Brockhampton, and Max Gate, his home in the town, can both be visited.

Shaftsbury is a gem of a Saxon hill top town, founded by Alfred the Great. The Abbey ruins and herb gardens are open to the public. Gold Hill behind the town hall, is a steep cobbled street with tiny cottages, a quintessential English scene.

Sherborne, in the north of the County has a medieval high street, a superb 15th century Abbey and two castles.

Wimborne Minster is named for its Minster church, which is unique for having two towers, a lantern tower of the late Norman period, and a later western tower of the 15th century. Visit the miniature town with 300 model buildings.

Days out in Dorset


Places to Visit in Dorset