You are here:  Towns -> Places to Visit in Dorset -> Bovington Camp

Things to do in Bovington Camp, Dorset

Bovington Camp is an active army base in Dorset, situated between the towns of historic Dorchester and Poole.

Although named a camp, Bovington is actually a fully contained barracks town. It is home to many service families and there is even a school on the base.

The Allenby and Stanley Barracks onsite are the base for the Armour Centre which was formerly and more grandly known as the Royal Armoured Corps Centre.

Bovington Camp covers not only the residential area and training grounds but also a small forested area and heathland which are used by the army for military exercises.

The camp is also frequently used by Dorset army and air cadets who practise their fieldcraft exercises there.

One of the most famous recruits at Bovington Camp was T.E. Lawrence, also known as Lawrence of Arabia.

He led daring raids in the Middle East against the Turks and was a well-known war hero as well as an accomplished writer.

Lawrence chose to live off-campus for a time at his simple cottage known as Clouds Hill at nearby Moreton.

It is now a National Trust owned property well worth visiting from Bovington Camp.

Lawrence was killed in a freak motorcycle accident while travelling between his home and Bovington Camp.

His needless death eventually brought about the use of crash helmets for military dispatch riders and then for civilian motorcyclists.

His grave can be visited in a quiet cemetery just a short distance down the road from St Nicholas Church in Moreton.

Things to do in Bovington Camp

The main attraction for visitors to Bovington Camp is the Tank Museum.

It has what is said to be the finest collection of tanks in the world, making it ideal for would-be recruits and those with an interest in armoured warfare.

Altogether the museum has over 200 tanks that date back to the World War I era, including the first experimental tank known as Little Willie, developed in 1915.

The history of tanks and the life of tank personnel are shown in the exhibits.

During school holidays the Tank Museum puts on some live displays.

It continually offers a program of educational lectures and its extensive library has one of the largest collections of books specifically on armoured warfare.

Visitors can see the last surviving German Tiger Tank, a CV-33Tankette, Mathilda II, Pzkfw V Panther Medium tank and many other Crusader and Churchill tanks as well as a Rolls Royce armoured car.

Not all the museum exhibits are old as it also showcases some of the latest battle tanks available for present-day manoeuvres and armed combat.

On a slightly different theme, Lulworth Heritage Centre is just four miles from Bovington Camp and covers the history of Lulworth Cove and the unusual formations over the last 150 million years or so.

Athelhampton House and Gardens also offers a fabulous day out from Bovington Camp.

The splendid 15th-century house is furnished in keeping with its stately appearance.

The gardens are a peaceful place to stroll around and enjoy the fountains and the riverside setting. 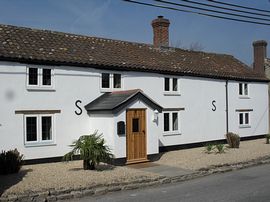 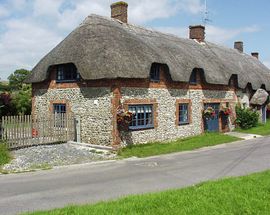 more self catering near Bovington Camp...

Days Out in Bovington Camp

Places to Visit near Bovington Camp