You are here:  Attractions -> Things to Do in Dorset -> Golden Cap 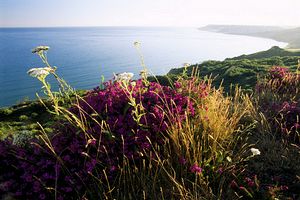 Golden Cap proudly stands as the highest point on England's south coast at 191m (626 feet) high, marked by a concrete survey point. The Golden Cap estate covers 2000 acres of National Trust parkland and is popular for hikers and ramblers as well as nature spotters and fossil hunters.

The surrounding area is part of England's only natural World Heritage site - the Jurassic coastline, which has traces of around 185 million years of geological history. Look out for the golden greensand rock at the top of the cliff which gave Golden Cap its name.

The rocky headland of Golden Cap is well worth climbing along the well-maintained paths, to enjoy the magnificent views which stretch from Lyme Regis Bay 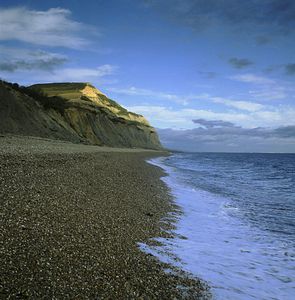 to the distant peaks of Dartmoor. Below are the sandy beaches, cliffs and rock pools which are typical of this area of Dorset coastline. Further inland are endless fields demarcated by ancient hedgerows.

From the top of Golden Cap it is easy to see the other landmarks in this beautiful area of unspoilt scenery. Stonebarrow Hill is a popular starting point for walking some of the 25 miles of footpaths in the area.

The National Trust information point can be found in an old radar station at Stonebarrow Hill along with a shop, toilets, car parking and souvenir gifts. Walks lead visitors through Langdon Hill Wood on a circular trail amidst local wildlife.

In the spring bluebells cover the shady woodland floor. In summer blue butterflies are prolific and in the autumn the woods are decorated with amazing fungi.

A walk up Golden Cap following the waymarked signs is described as moderate with some steep climbs near the top. Although it is less than 3km (2 miles) it takes about an hour. Shorter walks run through Langdon Hill Woods and may include sightings 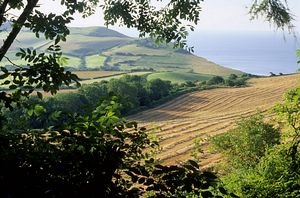 of deer, rabbits and birds of prey.

Those interested in geocaching will find clues to a number of caches in the area on the geocache website and a handheld GPS is required for this fun activity.

Those wanting to search for Jurassic coast fossils as part of a day out to Golden Cap should head for St Gabriel's Beach. It is accessed by a steep flight of steps cut into the cliff from the site of a ruined chapel and former hamlet. Many fossils continue to be unearthed in this geologically rich area including Ammonites and Belemnites at the foot of the cliffs.

As part of a more recent history, Thornecombe Beacon was one of a chain of beacons which were lit as an early warning system against possible foreign invaders such as the Spanish Armada. The spot is marked by a raised metal basket, a replica of the original which was built in 1588 and used to hold the beacon fire. You can see why the spot was chosen as it has fantastic far-reaching views from the headland to Chesil Beach, Bridport and beyond.

Days Out near Golden Cap

Places to Visit near Golden Cap