You are here:  Attractions -> Things to Do in Dorset -> Chettle House 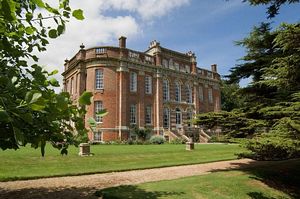 In 1710 Thomas Archer was commissioned to build the existing Chettle House in place of the Elizabethan house then occupied by the Chafin family. It is reputed to have taken some twenty five years to build, all the materials coming from the neighbouring countryside.

The house has two principal storeys with basements and attics and it had a cupola which formerly crowned a centre of the house but was removed in the 1840s.

The house has no corners, all corners are rounded in common with the Archer style similar to those at the Church in Smith Square in London.

On the south side of the house, the three windows at the ground-floor level have three dates 1710, 1846 and 1912 - these signify, firstly the date when the house was started, 1846 when the Castleman family started the renovation of the house, and 1912 when further works were done.

Although the south end of the basement is not open to the public the central lower hall illustrates how the house was constructed. Pillars set in the wall or in the room maintain barrel vaulted ceilings. Passing from the basement to the Oak Hall, one climbs what was the original stone staircase. Although alterations were made to The Oak or East Hallway in the 1840s the staircase is original. There was a gallery on the east wall connecting the bedrooms.

The Stone or West Hall has doorways made of walnut and oak and are probably original but the timpana with bass reliefs by Alfred Stevens were added in the 1840s. The two statues came from the great exhibition of 1851 and the chandelier is reputed to be early English between 1760 and 1780.

The house was recently used as one of the locations for the film Amazing Grace, which was about William Wilberforce and his efforts to stop slavery. Chettle House was dipicted as Wilberforce's Wimbledon home.

The west tower is early 16th century, but the chancel, nave, vestry and organ chamber were rebuilt by the Castleman family in 1850. The 19th century part is in Decorated style and the 16th century tower is of two stages, with moulded plinths and weathered string courses, and an embattled parapet. The bells are from the Salisbury foundry and date approximately to 1350.

Days Out near Chettle House

Places to Visit near Chettle House