You are here:  Attractions -> Things to Do in Dorset -> Corfe Castle 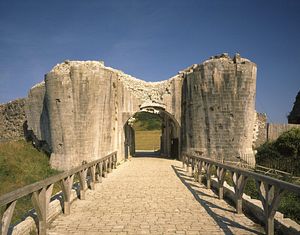 On the site of the ruins of Corfe Castle in Dorset there once stood the most magnificent castle of Middle Age England. Even in its current ruined state it is very easy to imagine its former grandeur.

Corfe Castle was where the last great siege of a medieval castle took place and it held out impressively against the cannons and infantry of Cromwell's army from 1643. In a treacherous move, Parliamentary troops were substituted during an exchange of prisoners of war, and the castle consequently fell in 1646. Due to the royalist allegiance of the owner, Sir John Bankes, the castle was ordered to be demolished, but as its current status illustrates, it was far too well built. When the 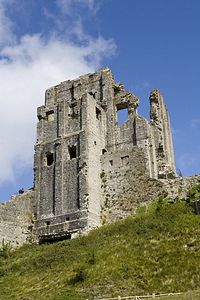 towers were undermined, they simply slid into the pit, and remained resolutely whole, hence the very picturesque ruins which remain.

Probably more damage was done by the locals than by the troops as they looted the site for its limestone masonry. It was used to rebuild the pretty local village which had also suffered at the hands of the destructive parliamentarian troops. Corfe Castle's ruins remain atop a steep chalk hill, guarding the only natural route through the Purbeck Hills.

Corfe Castle was begun by William the Conqueror in the late 11th century and it was completed during the reign of Henry I, who found it came in very handy for imprisoning his elder brother Robert, Duke of Normandy, in 1106.

The castle was used as a seat of government as well as a strategic stronghold and had huge sums invested in it over the centuries with a "gloriette" tower house, a great hall, chapel and chambers for the queen which overlooked the gardens. 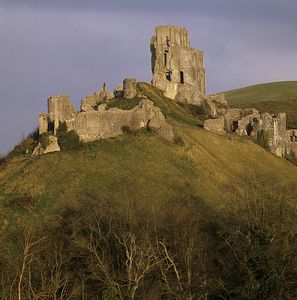 stronghold, fortress and royal residence. With breathtaking views and waymarked walks around the Dorset countryside, it is a playground for children of all ages.

There is still sufficient structure, albeit ivy clad and invaded by greenery, to see the original arrow loops and murder holes where boiling water and arrows were used against potential invaders.

You may see the resident ravens which have recently returned to nest at Corfe Castle. It was believed that if the ravens left the castle it would fall, and according to local legend in 1638 the ravens disappeared and the castle was largely destroyed in 1646. Bird watchers may also see the peregrine falcons, buzzards and black redstarts which are often spotted around the area of the castle.

Corfe Castle's history continues to be celebrated by the National Trust with court jester days, castle quest activities and living history events. There is a delightful licensed tea-room where clotted cream teas may be enjoyed in the garden, or browse for gifts in the National Trust shop in the pretty village square below the castle.

Days Out near Corfe Castle

Places to Visit near Corfe Castle