You are here:  Towns -> Places to Visit in Cheshire -> Runcorn

Things to do in Runcorn, Cheshire

The industrial town of Runcorn is built on a bulge of land on the south bank of the Mersey, where the estuary narrows to form the Runcorn Gap.

This Cheshire town is 16 miles east of Liverpool and is situated on both the Manchester Ship Canal and the Bridgewater Canal.

The earliest history of Runcorn is unknown, although objects have been found from the Stone Age, the Bronze Age and the Iron Age.

The earliest recorded building was the fort on Castle Rock by Ethelfleda in 915 AD. It was to protect the kingdom of Mercia from the invading Vikings. Halton Hill was the site of another motte and bailey castle built in the 1070s and the remains can still be visited.

An Augustinian Priory was established at RuncornIn in 1115 by William Fitznigel. It survived until 1536 and was then adapted to become a home for Sir Richard Brooke.

The Runcorn Ferry, which linked Runcorn with Widnes West Bank, ran for centuries from 1178 until 1905 when the Transporter Bridge replaced it.

Runcorn was considered a health resort in the late 18th century, but it was the Industrial Revolution that transformed it from a small hamlet into the industrial hub it has since become.

The building of the Bridgewater Canal, the Trent and Mersey Canal and the Mersey and Irwell Navigation gave Runcorn connections to many inland towns and a port developed.

Runcorn developed further links with Liverpool and the rest of the UK with the opening of the Runcorn Railway Bridge in 1868 over the River Mersey.

In the 19th century industries sprang up in engineering, quarrying, tanning and shipbuilding. By the 20th century chemical plants were also in evidence in Runcorn.

Situated on the M56 and close to the M6 and M62, Runcorn developed as a distribution centre in more recent times with many warehouses.

Runcorn is a medium-sized town with around 61,000 inhabitants. With the arrival of jobs, the original village gradually expanded eastwards with new housing estates.

Despite the industrialization of the area and density of housing, Runcorn has green spaces on Runcorn Hill and in the extensive Town Park.

The Silver Jubilee Bridge which crosses the Runcorn Gap is one of Runcorn's landmarks and is the lowest bridge spanning the River Mersey.

Buildings of character include the All Saints Parish Church, built of red sandstone, the Town Hall and St Mary's Church in Halton. The oldest surviving building is the Seneschal's House on Main Street (a seneschal was a nobleman or officer).

Things to Do Around Runcorn

The ruins of Halton Castle remain on top of Halton Hill near the town centre. A walk to the top gives excellent views from the castle grounds. Within the Norman castle walls is the Castle Hotel, a Grade II listed building. It is possible to walk completely around the circumference of the old castle walls.

Norton Priory Museum and Gardens is a popular attraction. The ancient building houses a museum and is surrounded by gardens laid out when it was a country house. There is an ice house and a sheltered walled garden protecting the national collection of quince trees.

Catalyst is a science museum in Runcorn, dedicated to chemistry.

Alternatively, visit the World of Glass at St Helens where 30 displays and demonstrations can be seen. 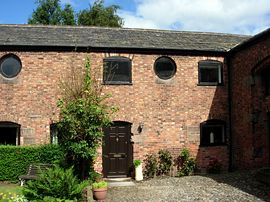 The Courtyard Helsby - The Stables - 4 Miles 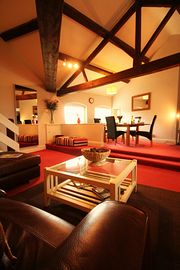 The Courtyard Cheshire - The Loft - 4 Miles

more self catering near Runcorn...

Days Out in Runcorn

Places to Visit near Runcorn