You are here:  Attractions -> Things to Do in Merseyside -> Speke Hall 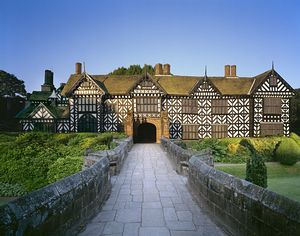 This romantic black-and-white timbered Tudor mansion captures the very best of "olde England", yet it finds itself in a green oasis on the edge of a modern industrial estate close to Liverpool Airport. Speke Hall is remarkably well preserved as it has just a wooden frame filled with a mud and straw mix known as "wattle and daub".

Speke Hall was built by the Norris family, three generations of which can be seen on the carved overmantel in the great parlour. The family has a long tradition as Members of Parliament for Liverpool. Henry Norris was responsible for much of the building when he inherited the foundations of the project from his father in 1490.

It was continued on by Henry's son, 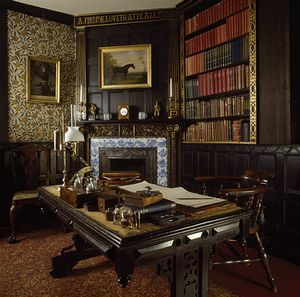 William who made several additions to the moated manor house to accommodate his family of 19 children. Completion fell to Edward, who added the date of 1598 over the entrance, no doubt with a sigh of relief.

The four main buildings surround a cobbled courtyard. Part of the appeal of this historic manor house is the uneven projection of the different facades, like building blocks pushed to and fro in an uneven line. The leaded panes of glass complete the country charm.

Visitors cross the dry moat on an Elizabethan stone bridge and enter the airy house through the studded wooden doors. The main features inside this period home are the "thunderbox" toilet and a priest's hole. There is also an "eavesdrop" where servants could listen to conversations of those awaiting admission to the front door, no doubt to determine whether they were friend or foe.

The interior décor is an eclectic mix with busts of Roman Emperors resting beneath elaborate Jacobean ceilings with pomegranates, roses, lilies and vines carved in the decorative plasterwork. The fluted columns and carved panelling all add to the interest of Speke Hall's interior.

It was the family's Catholic faith which led to them losing the estate after the Civil War and the house was left in a state of neglect. In the late 18th century Richard Watt bought the house 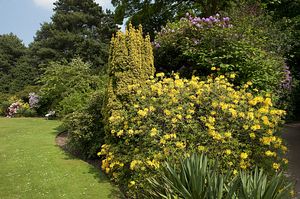 with profits made in the Jamaican sugar plantations. He began much needed restorative work before letting the house to shipping magnate, Frederick Leyland.

Leyland was responsible for the lovely William Morris wallpapers which are a special feature of the house. He also entertained the painter and artist James McNeill Whistler at the hall.

The gardens date back to the 1850s and the main features are the two ancient yew trees which flank the entrance. They are known as Adam and Eve and are not quite as old as their namesakes, being only an estimated 500-1000 years old! There are also rose gardens, a stream garden and woodland walks.

After Leyland's tenancy ended, Adelaide Watt set about developing the land around Speke Hall as a farm but unfortunately after her death in 1921, the farm complex was sold and Liverpool airport came into being.

Speke Hall was donated to the National Trust in 1944. It now enjoys plenty of attention as it is the starting point for the local tour around Paul McCartney's roots.

The Home Farm buildings are now used for the National Trust shop, restaurant and reception and the former Dairy has an interesting exhibition.

Walks in the grounds have superb views over the Mersey Estuary and the hills of North Wales, making it worth hearing the noise of the odd jet from the airport.

Days Out near Speke Hall

Places to Visit near Speke Hall