You are here:  Counties -> Things to do in Argyll and Bute

Argyll and Bute is situated on the west coast of Scotland. It's long been a popular holiday destination with over 3,000 miles of coastline, lochs and rivers, glens and mountains.

It also hosts part of Loch Lomond and the Trossachs National Park - found in eastern Argyll and Bute.

Ferry sailing between Oban and the Isle of Mull

There are castles, historic towns and villages and many islands to explore. Most of the county's main towns have tourist information centres to help you plan a visit.

A visit to Argyll and Bute often begins on the mainland around Loch Lomond, the largest freshwater loch (lake) in Britain, renowned for fishing, water sports, boating and golf. 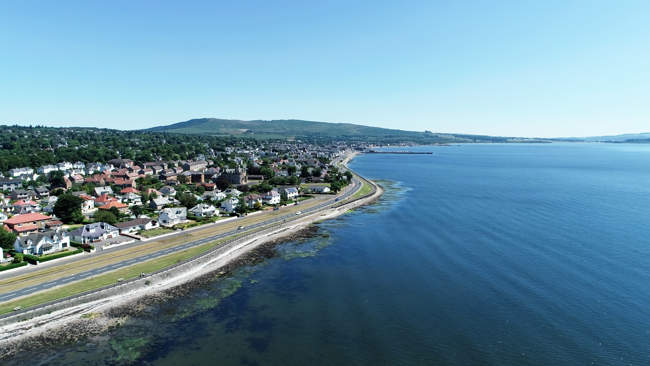 Aerial image of Helensburgh on the banks of the River Clyde.

Helensburgh is a busy town with good shopping.

The town has good transport links to many destinations in the County.

Helensburgh is home of Hill House, designed by Charles Rennie Mackintosh for the Glasgow publisher Walter Blackie. A short distance south at Cardross is the delightful Geilston Garden.

The picturesque town of Arrochar is situated near the head of Loch Long, separated from Loch Lomond by the Gareloch and Rosneath peninsula. The area includes the mountains known as the Arrochar Alps and the Argyll forest. 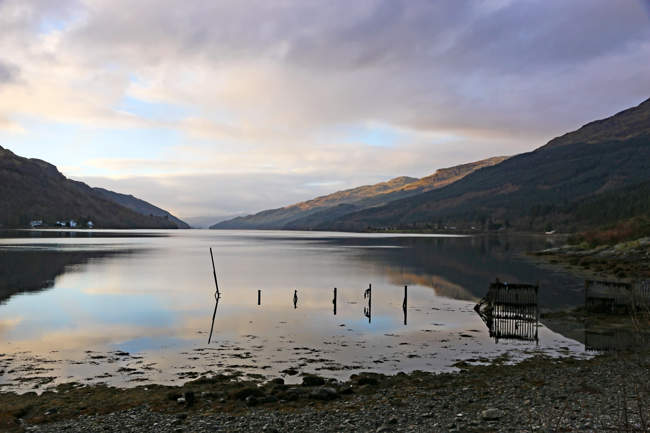 There are lots of water sports and sailing at Gareloch - boats can be hired at Roseneath Castle Park and classes are available throughout the summer.

At the south west of Roseneath peninsula at Cove Bay is Linn Botanic Gardens - due to the mild climate, many exotic species thrive here.

Inveraray is situated on the shore of Loch Fyne - famous for its excellent seafood and kippers. 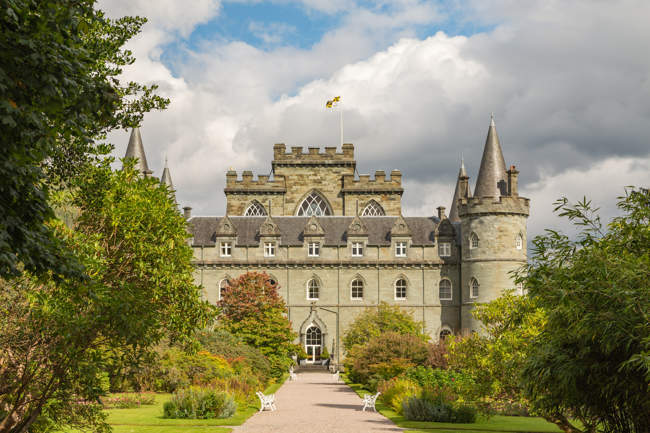 Inveraray is famous for its fine architecture and for being home of Inveraray Castle - seat of the Dukes of Argyll.

From the castle grounds a five-mile walk winds up Glen Shira leading to the Falls of Aray and to ruins of the home of Rob Roy.

Other attractions in Inveraray include the Maritime Museum, Inveraray Jail and the Argyll Wildlife Park. 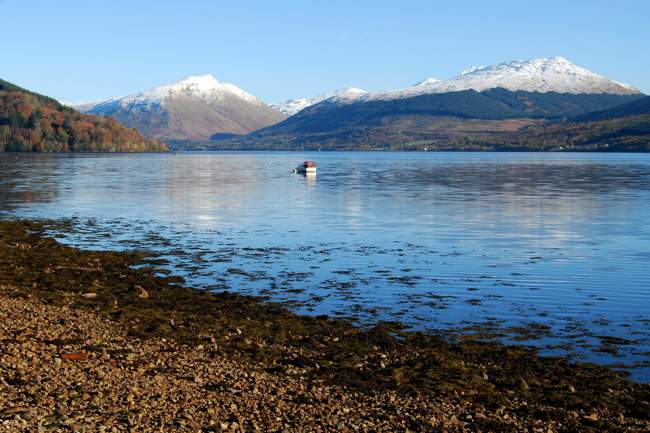 Six miles south of Inveraray is Auchindrain Township Museum - the original buildings are furnished and a visit is an entertaining day out for everyone.

Four miles to the south is Crarae Gardens, containing one of the best Rhododendron collections in Scotland. 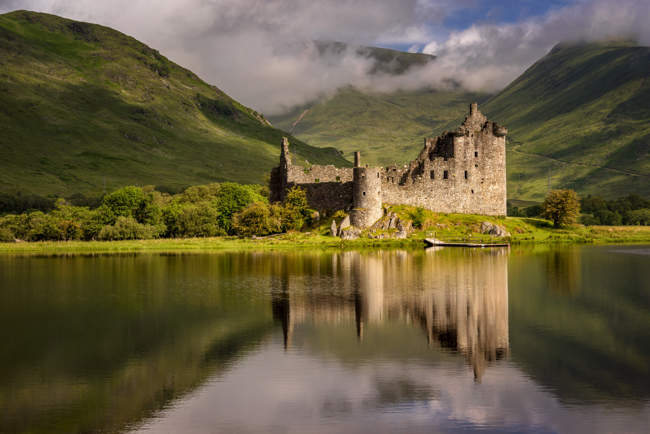 In the north of the county in a picturesque setting at the head of Loch Awe, is the ruined 16th century Kilchurn Castle, which incorporates the first purpose built barracks in Scotland.

Aerial view of Ardchattam and Bonawe seen from Loch Etive

The road through the Pass of Brander takes you to Taynult and nearby Bonawe Iron Furnace, the most complete charcoal-fuelled ironworks in Britain.

Dunoon is in the south of the Cowal peninsula. It was built around two bays and was planned for the 5th Duke of Argyll by James Craig, who designed the 'new town' in Edinburgh. 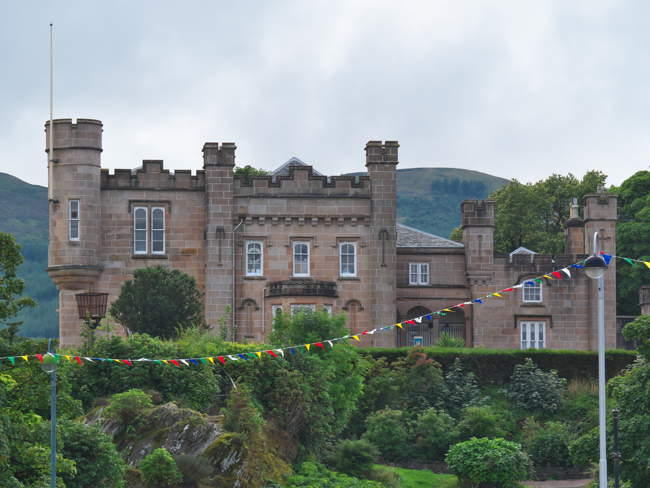 On Castle Hill, below the remains of Dunoon Castle, is a statue of 'Bonny Mary O' Argyll' (Mary Campbell), sweetheart of Robert Burns. 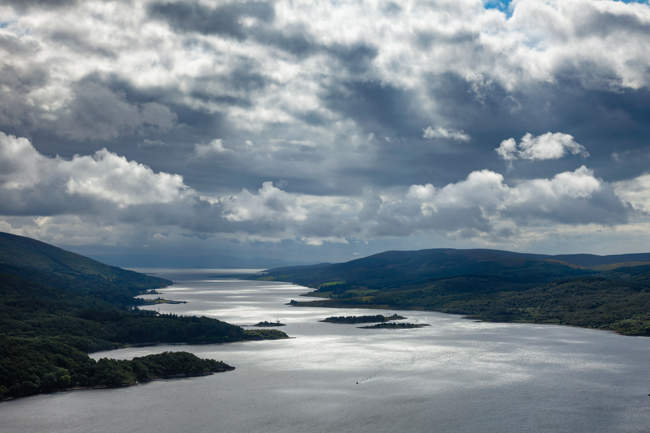 Aerial view of Loch Riddon on the Cowal Peninsula

Dunoon is host to the Cowal Highland Games held on the last Friday and Saturday in August annually, one of the largest Highland gatherings in Scotland. 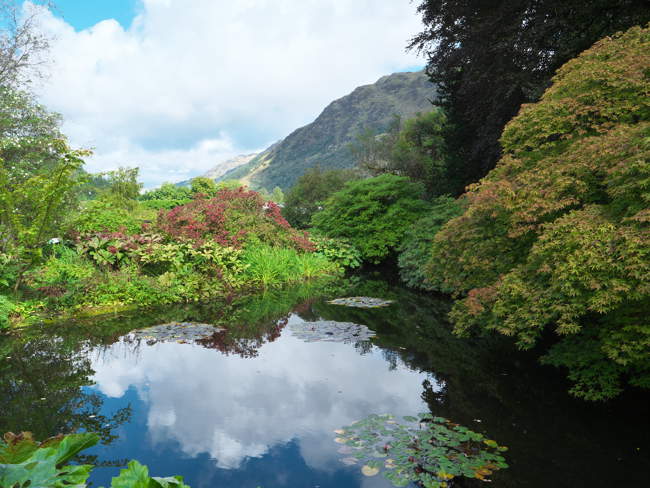 A few miles north of the town is Benmore Botanic Garden, famous for its collection of flowering trees and shrubs.

North of Oban on the A828 at Barcaldine, on the shore of Loch Creran is the Scottish Sea Life Sanctuary, which cares for many species of injured and orphaned marine creatures. It's an interesting place for family visits.

In the north of Argyll the busy town of Oban has all the facilities of a larger town that you might need. 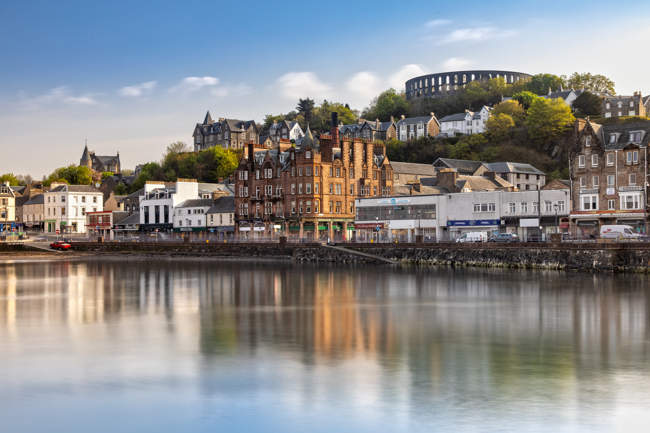 Notable features are the ruins of 13th century Dunollie Cast, and McCaig's folly. Built on a hill overlooking the town, this is an unfinished replica of the Colosseum in Rome. 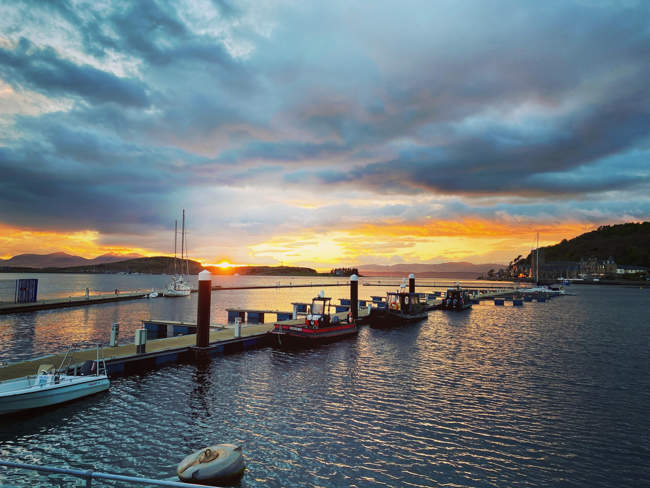 Approximately twenty miles south of Oban, overlooking the Sound of Jura, is the delightful Arduaine Garden.

Lochgilphead is the chief town of Mid Argyll. North of the town in Kilmartin Glen is an important collection of ancient monuments, many of which are prehistoric. A visit to Kilmartin Museum and visitor centre is well worth while.

Tarbert lies at the gateway to the Kintyre peninsula. It is an old fishing town, and today a popular port for yachtsmen sailing the west coast of Scotland. It lies on the tiny isthmus linking Knapdale and Kintyre.

Campbeltown, is the main town centre of the long peninsula of Kintyre. Further south is Machrihanish, the site of a classic golf course.

The Off Shore Islands of Argyll and Bute

The Isle of Bute

Rothesay is the main town on the Isle of Bute, an island in the lower Firth of Clyde. Bute lies at the foot of the Cowal Peninsula and is separated from it by the stretch of water known as the Kyles of Bute, one of the most popular holiday destinations on the west coast of Scotland. 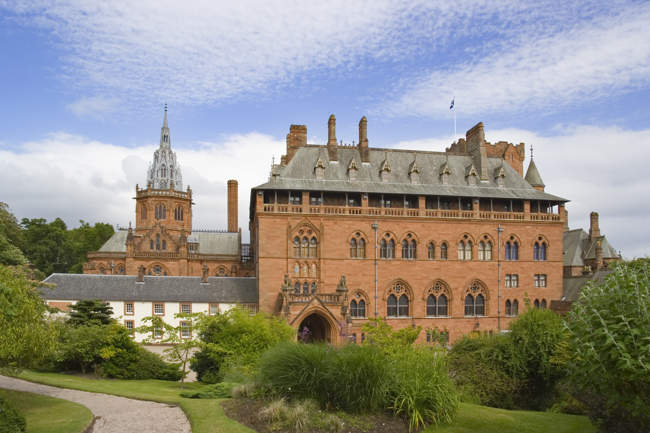 The island is only 15 miles long and 5 miles wide.

The Highland Boundary Fault line runs through the island creating a contrast, with three hills above 800 feet lying to its north. These are Windy Hill 911 feet, Kames Hill 875 feet and Kilbride Hill 836 feet. Unsurprisingly, all providing magnificent views. 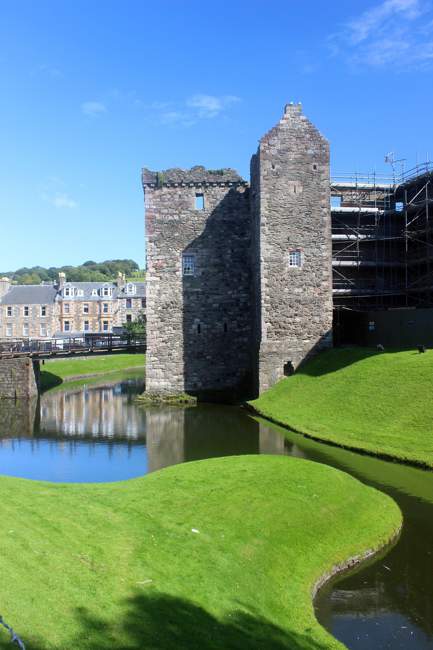 Rothesay is a pretty town with interesting attractions such as Rothesay Castle, with its unusual circular plan; Mount Stuart, the family home of the Stuarts of Bute, a spectacular house with a delightful garden, well worth visiting.

Other places of interest are Bute Museum and south of Rothesay is Ascog Hall Victorian Fernery and Gardens.

The Isle of Mull

The Isle of Mull is one of the islands in the Inner Hebrides. Tobermory, at the north of Mull is the largest village on the Island. Tobermory was planned in the late 1700s to provide housing for fishermen's families.

Today the town caters for tourism and has a golf club, yacht club, folk museum and interesting shops.

The town's many brightly painted houses feature in the BBC's series for children 'Balamory'. It also lent its name to one of the Wombles of Wimbledon Common! 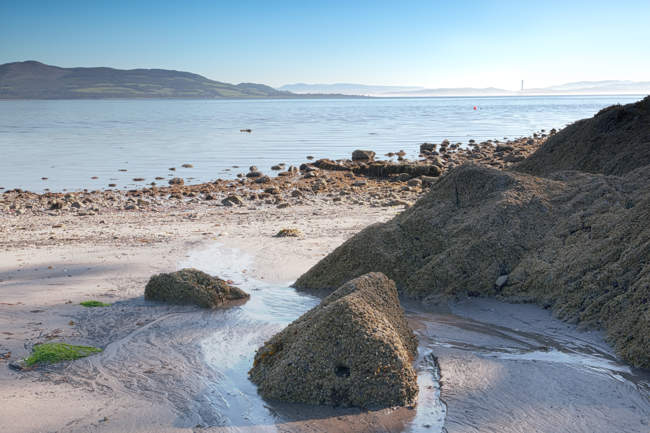 Mull is a beautiful Island with many clean sandy beaches and bays. Inland is moorland, forest and mountains, the highest of which is Ben More at 3,000 feet. 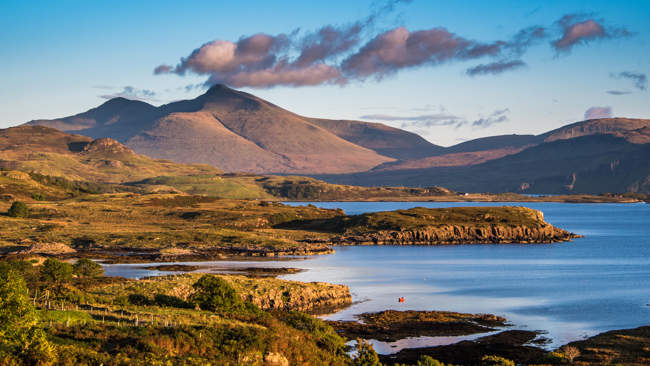 Wildlife such as golden eagles, otters, dolphins and even whales can be spotted in and around the island.

The wild scenery of Mull was the background of Robert Louis Stevenson's novel 'Kidnapped'.

Craignure is an attractive town with a pier. 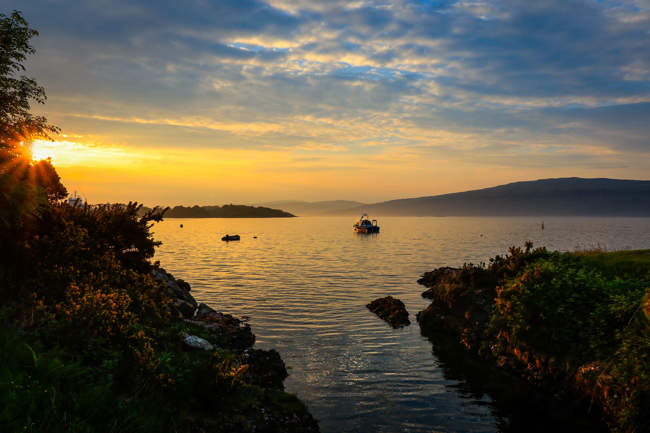 Sunset over Craignure, Isle of Mull

Just south of Craignure is Duart Castle - the family home of the Clan Maclean. 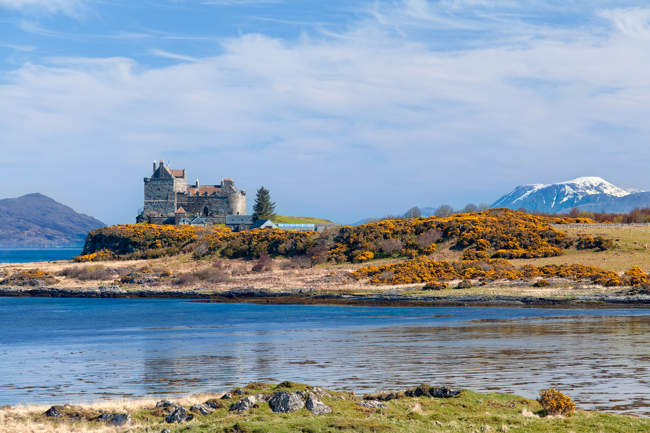 Iona and other Islands

South west of Mull is Iona, where in AD563 Columba landed from Ireland to extend the gospel in Scotland. 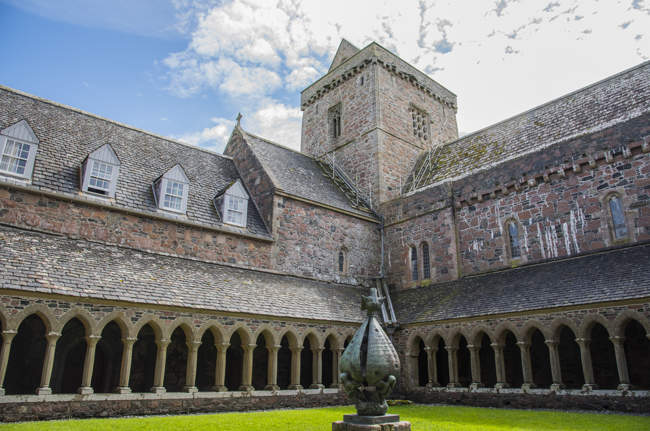 The island is a centre for Christian pilgrimage and one of the most sacred sites in Britain.

A group of small islands lying southwest of Oban are known as the Slate Islands. The island of Easdale is home to the Easdale Island Folk Museum, providing a fascinating insight of the time when these islands were the centre of the Scottish slate industry. 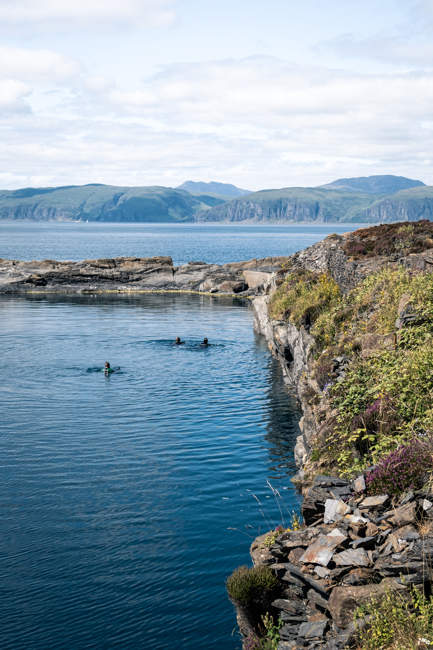 Wild swimming in the disused slate quarries of Easdale Island

Jura in the Inner Hebrides is rugged and mountainous, the highest point is the triple peaks, 'The Paps of Jura'.

Along the west coast are beaches and caves, the island is almost divided in two by Loch Tarbert.

The main village is Craighouse, where the local distillery makes Isle of Jura whisky.

Islay is the most southerly of the Inner Hebridean islands. Famous for the production of malt whisky, the island is home to several distilleries.

Islay is widely held to be one of the most beautiful of the islands, with fine beaches and bays. Many birds inhabit the island and birdwatchers come to see species such as Cormorant, Oystercatcher, Chough and in February Barnacle Geese. Several Celtic crosses are to be found in Islay, the best example being Kildalton Cross. 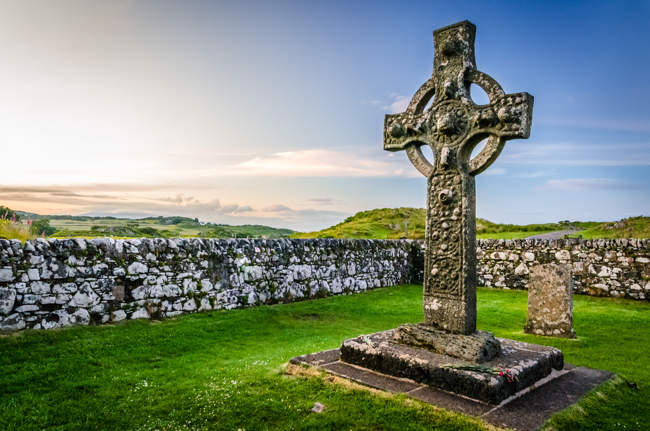 A visit to the Museum of Islay Life, is a fascinating experience for all ages.

Days out in Argyll and Bute


Places to Visit in Argyll and Bute