You are here:  Towns -> Places to Visit in Argyll and Bute -> Arrochar

Things to do in Arrochar, Argyll and Bute 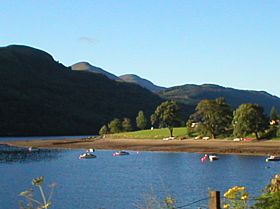 Arrochar is a remote Scottish village situated on the west coast of Scotland in Argyll and Bute.

It is easy to reach being on the junction of the A83/A814 and is served by trains on the West Highland Line. The station is called the Arrochar and Tarbet Railway station.

The area has a long history, being ruled first by the barons of Arrochar and later by the chiefs of the MacFarlane Clan.

In later years the MacFarlanes were known as cattle rustlers and they would steal their neighbours' livestock by moonlight.

It became such a frequent occurrence that the full moon became known as "MacFarlane's lantern"!

In 1263 a party of raiding Vikings dragged their boats through the gap carved by ancient glaciers between Arrochar and Loch Lomond.

They made it south as far as Largs before coming to grief on the stormy seas.

One unexpected site in Arrochar is the Torpedo Testing facility, a relic which was finally closed in 1980. Although partly demolished, it was used for firing torpedoes from the long tubes in front of the facility.

The unarmed torpedoes were recovered by boat and analysed.

Tracks can still be seen in the main building, on which the torpedoes were moved around and worked on, and the hoists which lowered the torpedoes into the tubes can also be seen.

This picturesque village won the Calor Village of the Year Award in 2009 and admirably demonstrated its community spirit, good communications, sustainability and proved itself a better place to live and work.

The village has a community hall and several local pubs and restaurants with good food and live music.

As well as small general stores there is a pottery studio and craft gallery in the village which has a range of locally crafted ceramics, jewellery and paintings.

Arrochar is surrounded by the Argyll Forest Park and enjoys some of the loveliest scenery in Argyll and Bute.

Things to Do in Arrochar

Nestled in the Arrochar Alps in the shadow of the Cobbler Peak, also known as Ben Arthur, Arrochar is the starting point for climbs up this 2946 feet high peak.

In fact, it has three peaks; the north and centre peaks are said to look like a cobbler bending over his work and the south peak is known as the Cobbler's Wife.

Arrochar is situated on the eastern shores of pretty Loch Long and backing onto Loch Lomond, less than two miles away.

It is part of the lovely Loch Lomond and the Trossachs National Park which is very popular for its magnificent scenery.

Hill walking, mountain biking, nature spotting and other outdoor pursuits can all be enjoyed in this unspoilt area and guided hikes are available with qualified local leaders.

The area around Arrochar is ideal for exploring by boat or by scenic road trips.

Fishing is popular, for mackerel and conger eel, and small boats can be hired at Arrochar marina and pier.

Scuba diving is popular on Loch Long and there are many top golf courses in the area.

For something completely different, why not take a trip in a seaplane from Loch Lomond?

Other day trips can be taken by train to nearby towns and Glasgow is just 45 minutes drive away.

Days Out in Arrochar

Places to Visit near Arrochar