You are here: Articles -> Misc -> Watermills 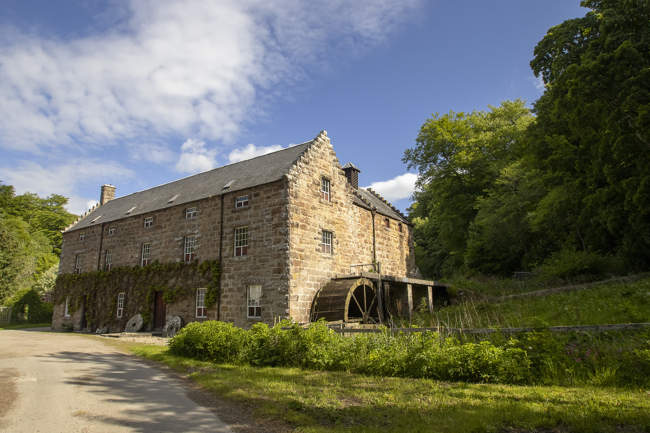 No scene is more quintessentially British than that of a watermill wheel, attached to the side of an old mill beside a scenic river.

Watermills are perhaps the most enduring technology throughout the ages.

They were certainly used during the first century BC and were used commercially in Roman Britain. 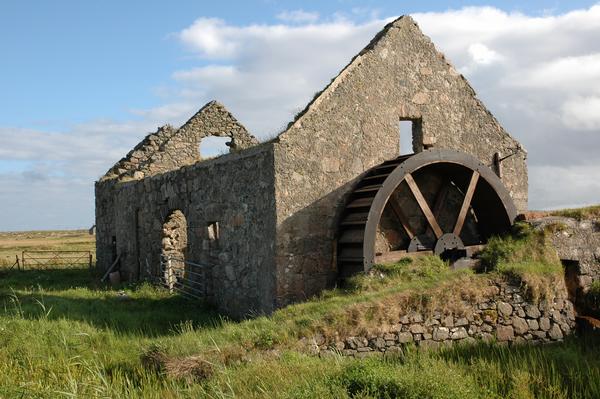 According to the Domesday Book records, there were more than 6,000 watermills in England by the late 11th century.

An estimated 20,000 watermills were still in use during the 19th century.

In Norman times, the feudal system "soke rights" made it compulsory for all farmers to have their grain milled at the lord's mill, and a percentage of the corn was taken as payment.

When the restrictive Corn Laws were repealed in 1846, more and more corn was imported and efficient steam mills gradually took over the work from the watermills. 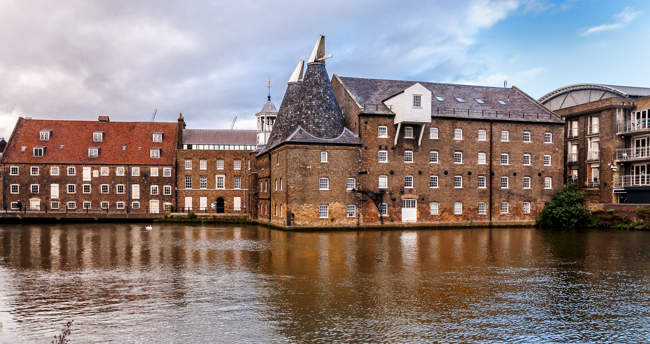 House Mill, part of the three mills complex at Bromley by Bow on the River Lee, London © Abdul - stock.adobe.com

The steam mills used a roller rather than a millstone to grind the corn.

They produced superior, whiter flour which had less oil and consequently lasted longer, so the days of the watermills were doomed.

Rural watermills became unviable and began to close down. By the end of the 19th century most watermills had ceased their commercial operations.

Burcott Mill in Wells is an exception and is a working watermill which still operates commercially today.

Watermills used a natural water flow to turn the waterwheel.

Often a small aqueduct or race was built to redirect water from the river to the top of the waterwheel.

The paddles caught the water and gravity moved the wheel downwards, turning it. 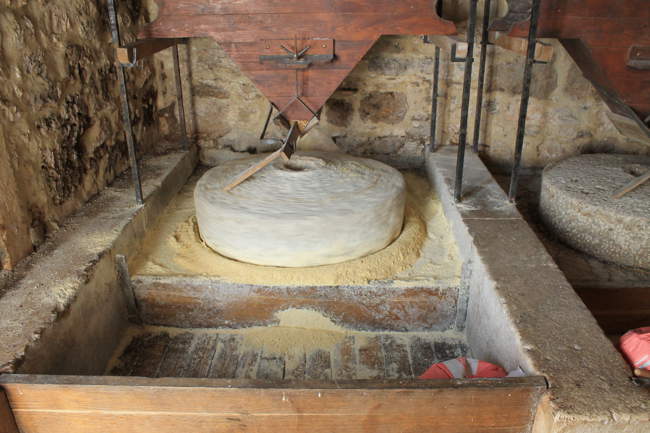 A shaft connecting the wheel axis to a series of cogs and gears worked the millstone inside the mill to grind the corn.

Another design using the same principle ran water beneath the wheel to push the wheel around.

This was known as the undershot method.

Often the water was controlled before it reached the waterwheel, either by weirs or mill races. 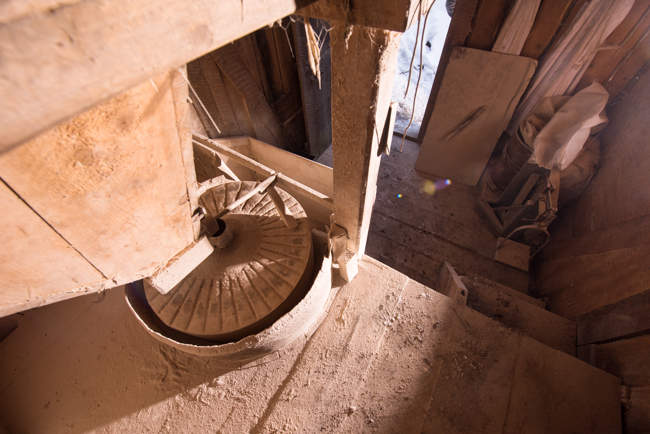 Many weirs which were originally built to control the water levels to a watermill can still be seen on rivers today.

Millwrights were skilled craftsmen who used wood, and later iron, to build a watermill.

Hardwoods such as oak were used for the shafts and wheels. 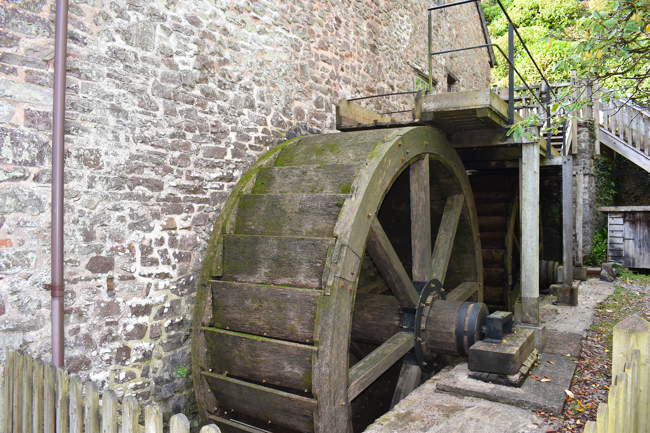 Watermill at the Dunster Castle Estate in Somerset © Rusana - stock.adobe.com

Elm was used for the hardworking paddles as it was more resistant to rot.

Iron was later used for the gears.

The millstone itself had to be hard-wearing and the Romans were known to have sourced their stone from the Rhine Valley in Germany.

Later Millstone Grit was used which was quarried in Derbyshire.

The modern-day symbol at the entrance to the Peak District National Park is an upended millstone sat at the side of the road. 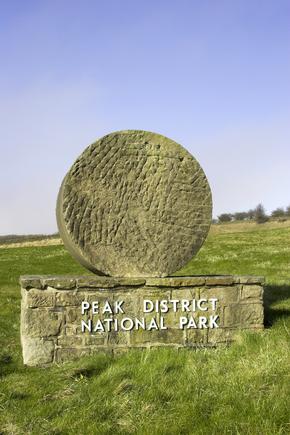 Two millstones were used and were usually about 1.25metres or four feet in diameter and weighed at least a ton each.

Skilled stonemasons cut grooves in the stones to grind the flour to the correct fineness. 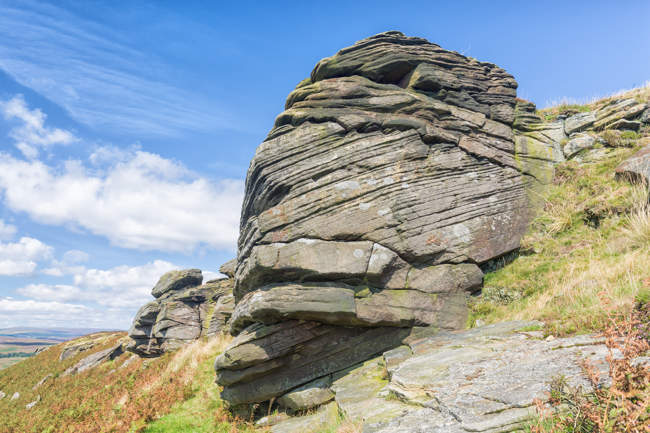 The stones had to be perfectly set so that they only touched the corn and not the opposite stone or they would quickly wear out. 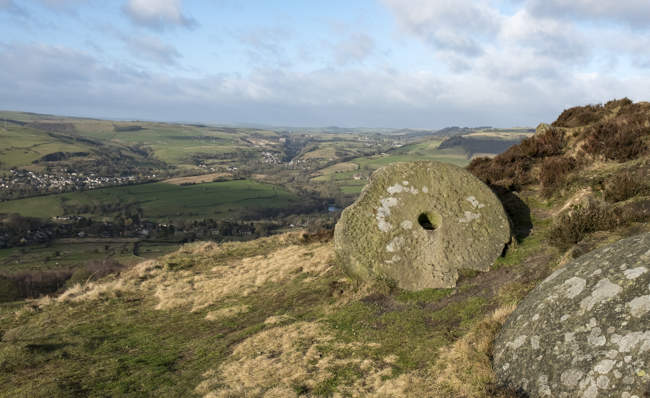 With the heavy wear and tear and the risk of sparks and fire, watermills had to be rebuilt every 200 years or so.

Thwaite Mills at Leeds is a fully restored watermill that is open to the public. 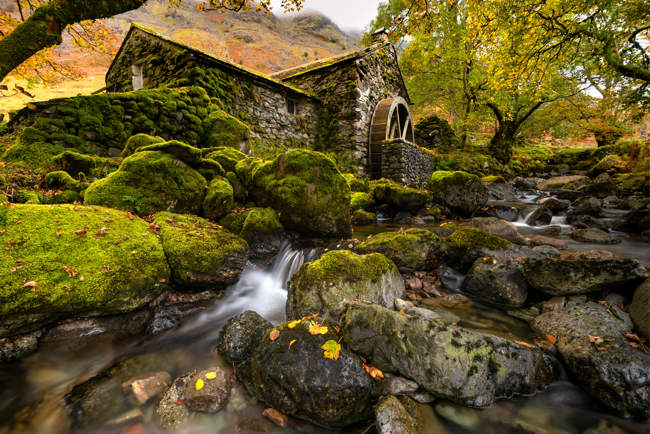 Visitors to the Path Head Watermill in Tyne and Wear can enjoy seeing a demonstration of how watermills work. 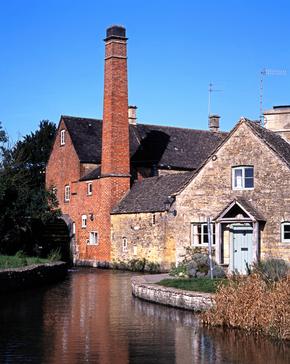