You are here:  Attractions -> Things to Do in Staffordshire -> Middleton Hall 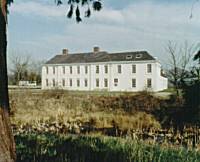 The Hall has an interesting architectural history with its earliest buildings dating from c.1300 and other buildings dating from the 16th century and the early 19th century. Its most obvious attractions are the gracious 11 bay Georgian West wing and the impressive 16th century Great Hall, the restoration of which was completed in 1994. A display of 24 framed embroideries, depicting the history of Sutton Coldfield, decorates the first floor corridor. Made by the Sutton Tapestry Guild, they were given to the Trust on permanent loan in 1994.

Middleton Hall was the home of two great naturalists. In the 17th century the Hall was the home of Francis Willughby, founder member of the Royal Society, whose interest in natural history was inspired and encouraged by John Ray, one of Britains greatest naturalists. A considerable amount of their work was carried out at Middleton where, after Willughby's early death, Ray continued to live, supervising the education of Willughby's children. He also arranged for the publication of Willughby's work and published much original material himself. Willughby and Ray's early work on the classification of flora and fauna formed the basis of the Linnean system now universally adopted. The Hall also has links with Sir Hugh Willoughby the Tudor explorer, Cassandra First Duchess of Chandos, Elizabeth I, Lady Jane Grey and Jane Austen.

The Middleton Hall Trust is a registered charity formed in 1980 to restore and maintain Middleton Hall for the benefit of the public as a centre for a variety of cultural, conservation and leisure interests.

Visitors can follow a path through the SSSI which encircles the lake and includes the old orchard, meadow and woodland path. Other attractions are the two walled gardens, souvenir shop, restored smithy and second hand books room, with refreshments available in the tea room overlooking the south pool.

Days Out near Middleton Hall

Places to Visit near Middleton Hall