You are here:  Towns -> Places to Visit in West Midlands -> West Bromwich

Things to do in West Bromwich, West Midlands 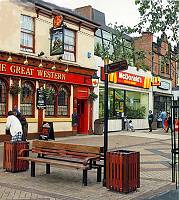 West Bromwich is the borough's largest town and is mentioned in the Doomsday Book of 1086. At the time Bromwich - 'the little village on the heath of broom' - was among the possessions of William Fitz-Ansculf, Baron of Dudley. The original settlement was round All Saints' Church, which still has Norman remains, while to the south was Bromwich Heath. For 600 years crops were grown locally, while local tradesmen and artisans supplied all the community's needs.

The Birmingham road became a turnpike in 1727, and West Bromwich became a stop on the Shrewsbury coaching route. In 1802 almost 400 acres of the heath were enclosed, and from 1804 the road developed into the current High Street. The growth in the town's population began at the same time - in 1801 only 5,600 lived there, but that rose to 15,000 by 1831.

Small industries like gum and nail making grew up and soon the town had its own ironworks. The discovery of coal deposits transformed West Bromwich - by 1901 the town had more than 65,000 residents and this had risen to 89,000 by 1950.

Today almost 200,000 people call West Bromwich their home, and the town has maintained its position at a crossroads of the Nation's motorway network. The town is packed with landmarks old and new. The timber-framed Oak House, the Georgian terrace of Highfields, the medieval Manor House and the excavation of Sandwell Priory represent the centuries past.

The many fine Victorian buildings bear testimony to West Bromwich's importance as an industrial centre. While the pedestrianised town centre - half a mile of shops and market stalls, featuring the celebrated Farley Fountain and the massive monument to John Wesley, show how well the town has adapted to meet the needs of today's citizens.

more self catering near West Bromwich...

Days Out in West Bromwich

Places to Visit near West Bromwich