You are here:  Towns -> Places to Visit in Staffordshire -> Tamworth

Things to do in Tamworth, Staffordshire

The Staffordshire town of Tamworth has a beautiful historic town centre. It is situated on the River Tame, 14 miles northeast of Birmingham.

When Birmingham was still a mere village, Tamworth was a thriving town. It was the capital of Mercia, which was the largest kingdom in England in the late 8th century, during the reign of King Offa. Tamworth became the target for invading Danes who sacked the town and it remained in ruins until the daughter of King Alfred the Great rebuilt it with a defensive burh in 918 AD.

In the 11th century Tamworth was fortified with the building of a Norman Castle which still stands today. Tamworth Castle was besieged by the Parliamentarians during the English Civil War and managed to evade the orders that it should be destroyed afterwards.

The town of Tamworth was granted a charter in 1337 but in 1345 once again the town was destroyed, this time by fire.

Robert Peel, founder of the modern day police force, was Tamworth's MP for 20 years and lived at Drayton Manor. His 1834 Tamworth Manifesto was the start of the modern Conservative Party and he served twice as the British Prime Minister.

Tamworth was well known for its small engineering, tile and paper manufacturing and it was where Reliant produced their Scimitar sports car and the three-wheeler Reliant Robin vehicles. The production moved to Cannock in 1998 but the new housing estate, Scimitar Park, retains many names from this historic works.

Modern-day Tamworth is a sizeable market town of around 75,000 residents. It has a mixture of old redbrick cottages, council estates and newer housing.

The town centre has plenty of shops, banks and local services along with pubs and restaurants.

It has two major bridges across its local rivers. The Lady Bridge or St Mary's Bridge crosses the Tame River and the Bole Bridge crosses the Anker River. The town is surrounded by water meadows scattered with buildings from former corn mills, calico print works and woollen manufacturing.

Things to do in Tamworth

Tamworth's main attraction is Tamworth Castle, a well-preserved motte and bailey castle. It is a popular place to visit with its four historic cannons.

Those who enjoy walking and nature spotting will enjoy Tamworth's two local nature reserves at Hodle Lane and Kettlebrook.

Visitors can enjoy winters ports at any time of year at the Snowdome, which has the UK's first indoor ski slope.

Drayton Manor Theme Park is a popular family attraction at Tamworth which is known for its thrill rides in the 280 acre leisure park.

One of Tamworth's most famous residents is celebrated with a monument in the town centre. Able Seaman Colin Grazier risked his life to secure the Enigma code from a captured German U-boat. He was posthumously awarded the George Cross.

Another famous Tamworth resident was MP Thomas Guy who built the lovely Town Hall in 1701 and founded Guy's Hospital in London. 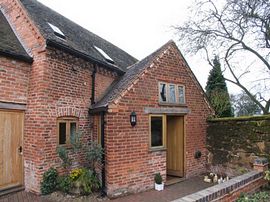 more self catering near Tamworth...

Days Out in Tamworth

Places to Visit near Tamworth