You are here:  Attractions -> Things to Do in Warwickshire -> Charlecote Park


A visit to Charlecote Park is a chance to follow the fortunes of the Lucy family who came to England during the time of William the Conqueror.

They have owned land at Charlecote near Stratford-upon-Avon since 1247.

If Charlecote Park had a guest book, it would have had many important royal names written on its ancient pages.

Sir Thomas Lucy had the current house built in the 16th century.

He was a local magistrate responsible for prosecuting local families which included the Arden family.

The Ardens were the grandparents of William Shakespeare on his mother's side.

Forced to flee to London, the rest is history, as 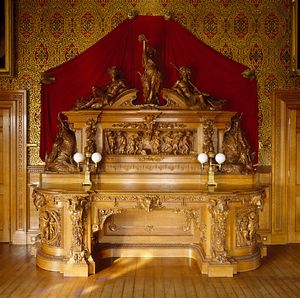 Shakespeare got his revenge by basing the Justice Shallow figure in his play "The Merry Wives of Windsor" on Sir Thomas Lucy and subtly ridiculing him.

Fascinating stories include an overnight visit to Charlecote Park in 1572 by Elizabeth I.

Her coat of arms can be seen on the porch, celebrating her visit and her portrait is on display in the gorgeous golden drawing room.

The historic house with its acres of parkland offers a wonderful family day out.

The splendid house with its ornate Tudor chimneys is beautifully situated overlooking the River Avon and was built in the 1550s.

The octagonal corner turrets are topped with cupolas and golden weather vanes.

The Elizabethan brick gatehouse and the Renaissance porch are the oldest parts of Charlecote Park.

Entering the historic home, the Elizabethan Hall would have been the banqueting parlour and with its family paintings and sculptures remains an impressive room.

Look for the fabulous table of coloured marble and semi-precious stones which came from the Borghese Palace.

The Elizabethan-style dining room includes the "Warwickshire Sideboard" and its clever design was shown to Queen Victoria on her visit.

Upstairs, the Ebony Bedroom features ribbed Jacobean ceilings and it is said that Nelson once slept in the ebony bed.

The Charlecote Park Museum focuses on the family's sporting history, including hunting (Henry Spencer Lucy was master of the Warwickshire hunt in the 19th century), tennis, polo, archery, cricket and 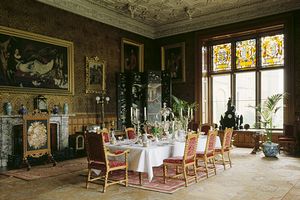 The house is filled with family portraits that trace the 760 years of family history.

Tours of the house will show the house as it was remodelled in Victorian times by Mary Elizabeth Lucy.

The rich décor is truly worthy of royalty with high quality furniture, fine works of art, and many objects transferred from the sale of contents held at Beckford's Fonthill Abbey.

The Victorian outbuildings include the scullery, kitchen, cider press, laundry and the coach house with a superb display of Victorian carriages.

There is also a Victorian orangery and a thatched aviary in the grounds.

In 1714 George Lucy inherited the house and employed Capability Brown to redesign the park.

He widened and changed the course of the river to give it a natural and easy level. Water steps create cascades which tumble down in view of the house.

The formal gardens have a sensory garden and a formal parterre with colourful ornamental beds.

There is also a "Shakespeare border" with plants mentioned in his plays such as violets, columbine and cuckoo flowers.

There are miles of woodland walks in the extensive parkland which is home to rare Jacob sheep and herds of fallow and red deer.

The views across the river Avon are of a delightful rural landscape in this lovely area of Warwickshire.

Days Out near Charlecote Park

Places to Visit near Charlecote Park