You are here:  Attractions -> Things to Do in Warwickshire -> Royal Shakespeare Company


One of the world's best-known theatre ensembles, the Royal Shakespeare Company performs the works of Shakespeare, other renaissance dramatists and contemporary writers all year round in its home in Stratford-upon-Avon.

The company also have regular seasons of work in London and Newcastle as well as doing UK and international touring.

The Theatres in Stratford have just undergone a four year transformation with the aim to make the Royal Shakespeare Theatre the best performance space for Shakespeare in the world.

The smaller Swan theatre has also been refurbished and for the first time both theatres are connected.

Operating under its present name since 1961, the RSC's roots stretch back to the building of the first permanent theatre in Stratford. 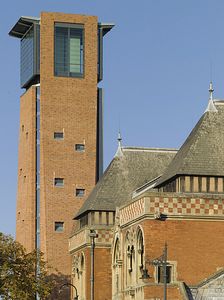 a Stratford brewer, launched an international campaign to build a theatre in the town of Shakespeare's birth. He donated the two-acre site. The Shakespeare Memorial Theatre was a Victorian Gothic building originally seating 711 people.

It opened in 1879 with a performance of Much Ado About Nothing. Initially the season was 8 days in the spring. This was extended by a month long season which was added in 1910. Almost 50 years of excellence were recognised in 1925 by the granting of a Royal Charter. However, only a year later the theatre was destroyed by fire.

Today, the Swan Theatre occupies all that remains of the original Victorian Memorial Theatre.

In 1932 the new Shakespeare Memorial Theatre, designed by Elizabeth Scott, was opened by the Prince of Wales. The date was 23rd April - Shakespeare's birthday.

Over the next thirty years the Company continued to build its reputation, working with established Shakespearean actors, as well as nurturing new talent. 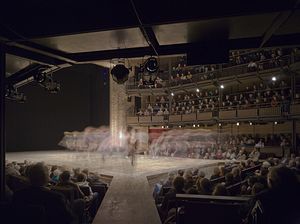 modern Royal Shakespeare Company and in 1961, the Memorial Theatre was renamed the Royal Shakespeare Theatre. Over the next thirty years the company continued to expand under a succession of visionary and creative Artistic Directors.

The company set up a base in London and started a regular season in Newcastle Upon Tyne. It also started an annual UK Mobile Theatre tour. The Other Place and its London counterpart The Wharehouse opened in 1974 and 1977 respectively, to foster the work of contemporary writers.

The 1986 season in Stratford saw the opening of another theatre. Built inside part of the shell of the Memorial Theatre that survived the 1926 fire, the Swan is a unique, modern theatre based on the design of the playhouses of Elizabethan England.

Days Out near Royal Shakespeare Company