You are here:  Towns -> Places to Visit in Warwickshire -> Ettington

Things To Do in Ettington, Warwickshire 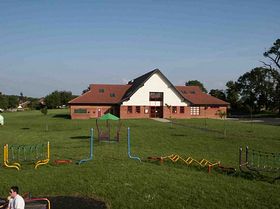 Follow in the footsteps of Queen Victoria, and Elizabeth I before her, and visit Charlecote Park

Standing in acres of parkland designed by Capability Brown, Charlecote boasts some beautiful interiors such as the Elizabethan Hall.

You can also enjoy the Victorian orangery and coach house with it collection of carriages, walk miles of woodland paths, and admire the red and fallow deer, and the rare Jacob sheep.

More than a million people travel from around the world to see a Shakespeare Play performed by the world-famous Royal Shakespeare Company in Stratford-upon-Avon.

So when you're only 6 miles from Stratford, don't miss the opportunity to see one of the cultural highlights that Britain has to offer.

You can choose from several different productions at any of the three theatres that the RSC own in Stratford-upon-Avon.

In addition to Shakespeare plays at the Royal Shakespeare Theatre, they also have contemporary productions at The Other Place, and work by other playwrights from Shakespeare's time at The Swan Theatre.

Hall's croft is one of the most impressive of the Shakespearean properties in Stratford. It was home to William Shakespeare's eldest daughter Susanna, and her husband John Hall.

John Hall was a successful physician, and would have created his medicines at the house using the medicinal herbs grown in the garden.

Today the house is furnished as the house would have been in the Halls' time and there is a beautiful tranquil walled herb garden.

One of the most intriguing Shakespearean Properties is New Place, which was the last house that Shakespeare lived in. He owned the imposing house from 1597 until he died in 1616.

The house was demolished in 1759 in mysterious circumstances by a subsequent owner.

The site has been transformed by the Shakespeare Birthplace Trust into a memorial garden, which shows the layout of the house as it was in Shakespeare's time.

Next the door is the Nash's House Museum which tells the story of Stratford up to Shakespearean times.

It's around 6 miles from Ettington to the centre of Stratford-upon-Avon, where you'll find the often over-looked Harvard House.

Harvard House is an exceptionally well preserved Elizabethan townhouse, and is a great way to see how the wealthy Elizabethans lived.

The house was built by the merchant Thomas Rogers in 1596.

There is a connection with Harvard University in America: Thomas Roger's grandson was the initial benefactor of the university when it first started in 1638.

Shakespeare's Birthplace is well worth visiting - and not just for the 16th Century house itself with its wattle-and-daub construction, stone floors and low ceilings.

Shakespeare's time is brought to life by costumed guides telling stories of life in that house when William was a boy.

Resident actors also perform some of the highlights of his work. If you have a favourite scene, they may even take a request!

Don't miss the beautifully re-created English garden featuring many plants Shakespeare mentions in his plays, or the informative Visitor centre with information and artefacts from his life.

When Anne Hathaway was living at the Hathaway family cottage in Shottery, William Shakespeare would walk across the fields from Stratford-upon-Avon to visit her.

The cottage is a great insight into the way that the Hathaway family lived in the Elizabethan times, as still has lots of its original features (wooden panelling, dairy, original furniture), and outside there is an old English cottage garden and orchard.

Keen gardeners looking for inspiration couldn't do better than a trip to Hidcote Manor Garden.

The product of more than 30 years work by 12 gardeners, the garden divides its 10 acre site into mini-gardens, each on a different theme.

Don't miss the stunning views of the Vale of Evesham, or the renowned herbaceous borders.

You can buy plants for your own garden from the plant shop, and refreshments in the on-site cafes.

Places to Visit near Ettington