You are here:  Attractions -> Things to Do in Greater London -> 10 Downing Street


One of the best known Streets in London is Downing Street, named after its builder, Sir George Downing, who was a Cromwellian civil servant. No. 10 with its famous black front door - the backdrop to many historical announcements, has been the official residence of Britain's Prime Minister since 1732, when King George II presented the property to Sir Robert Walpole, Britain's first Prime Minister.

No. 11, home of the Chancellor of the Exchequer since 1806 and No. 12, home of the government's chief whip, are all that remains of the original 17th century terrace. The other buildings in the street date from 1868. Unchanged externally, this brick built terrace of interconnecting houses has been modernised internally over the years to accommodate, as well as the many offices required, the Cabinet room on the ground floor and a flat on an upper floor occupied by the Prime Minister's family.

At the end of Downing Street today, are a pair of iron gates to prevent the public access to the cul-de-sac, for security reasons. 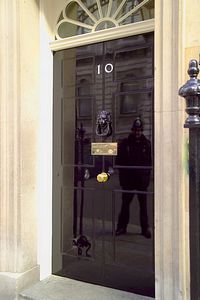 Days Out near 10 Downing Street

Places to Visit near 10 Downing Street