You are here:  Towns -> Places to Visit in Gwynedd -> Criccieth

Things to do in Criccieth, Gwynedd 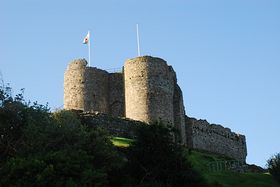 Criccieth is one of the best known towns on Cardigan Bay, nine miles east of Pwllheli. The town is centred on the walls and ruined remains of Criccieth Castle which has extensive views over the town from its rocky perch.

Criccieth is known as "The Pearl of Wales on the Shires of Snowdonia". It dates back to pre-mediaeval times and evidence of a Bronze Age settlement and a chambered tomb suggest it was colonized by Celtic settlers around 4BC.

The castle dates back to the reign of Llywelyn an Iorwerth who ruled in the early 13th century. The area has an interesting history of rulers until Wales was finally invaded by Edward I and it became English territory in 1282.

Criccieth Castle was then extended and used as a garrison and a prison. It was sacked and burnt during an uprising against Henry IV by Owain Glyndwr in 1404 and was never reoccupied.

During the 19th century the village expanded as a Victorian seaside resort, helped by the opening of the Aberystwyth and Welsh Coast Railway.

In 1927 a great storm caused a double high tide destroying houses along Abermarchnad and many houses had to be demolished. Sea defences continue to be improved to prevent similar disasters in the future.

This small town has around 1,800 residents who are mostly Welsh speaking and proud of their heritage. The town is best known as a seaside resort with a beautiful sandy beach which is ideal for young families. It is also a popular place with retirees.

One of the town's main landmarks is Cadwalader's Ice Cream parlour which opened in 1927. The ice cream is still made locally.

The town centre includes part of the original town common at Y Maesand the Parish Church, dedicated to St Catherine, dates back to the year 1300 AD.

Famous people from Criccieth include former Prime Minister, David Lloyd George who was raised and later retired and died at neighbouring Llanystumdwy. His nephew William George is a famous Welsh poet.

The town has two beaches and a lifeboat at Lon Felin. There are plenty of gift shops and local stores and along the Stryd Fawr there are several bistro-type restaurants.

Things to do in Criccieth

Criccieth hosts two fairs in May and June and they draw crowds from all over the area. The market stalls cover the narrow streets and it provides a fun day out.

The East Shore has a sandy beach with a shallow sea which is ideal for swimming. The quieter Marine Beach is to the west of the town. Both beaches have a yellow flag award for clean water.

Criccieth Golf Club has a tricky nine holes with the distinction of having been played by at least three prime minsters - Andrew Bonar Law, David Lloyd George and Sir Winston Churchill.

Sea angling is popular from boats, the jetty or from Marine Beach. Congor and wrasse dabs are around the jetty area while whiting, bass, dogfish, mackerel and pollock can be caught from the beach. There is a hatchery nearby for sea trout and Gloddfa Lake, a local quarry pool, is used for coarse fishing.

Places to Visit near Criccieth