You are here:  Counties -> Things to do in Cambridgeshire 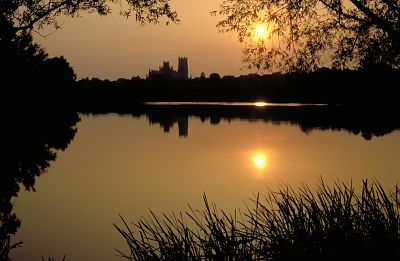 Cambridgeshire, situated in East Anglia, is rich in heritage and natural history. There are ancient cities, towns and villages with quiet charm and beauty to explore. Cambridgeshire's countryside offers fresh green uplands, contrasting with the lowlands and broad horizons of the Fens. The County contains many sites of Special Scientific Interest and National Nature Reserves.

This university town of Cambridge is a jewel in the crown of English architecture. Situated on the banks of the River Cam, surrounded by a Green Belt of water meadows, streams and pools, Cambridge will draw you back many times. First time visitors will benefit by taking a guided tour of the city.

The countryside of South Cambridgeshire is rural and varied, with rolling chalk hills covered with beech woods to flat, fertile fenland. Discover picturesque villages such as Granchester, home of the poet Rupert Brooke, who lived in the Old Rectory. Attractions in South Cambridgeshire include Anglesey Abbey and the Imperial War Museum Duxford.

The area offers cycle ways and walks and local rivers are famous for coarse and game fishing.

St. Neots is an ancient market town which is now the largest town in Cambridgeshire. Nearby Paxton Pitts Nature Reserve is home to the second largest breeding cormorant colony in England.

Oliver Cromwell's House in Ely, whose magnificent Cathedral stands like a landmark towering above the fens, is well worth a visit. Ely lies on the banks of the Great River Ouse, where the crew of Cambridge University practise for the famous boat race between Cambridge and Oxford Universities.

Take a trip on a traditional river launch along the picturesque waterfront, or ride the Fens Cycle Way, which starts at Ely. Ely Museum is worth visiting to learn more about the area. Visit Wicken Fen, Britain's oldest nature reserve to see a huge range of wildlife. Four miles east of Ely is Prickwillow Drainage Engine Museum, home of the 1924 five cylinder Mirlees - the museum explains the history of Fen drainage.

Huntingdon is the birthplace of Oliver Cromwell who was a pupil at the Old Grammar School (now the Cromwell Museum), as was Samuel Pepys. Explore the area's historic towns and villages, such as Hemingford Grey and visit the oldest continuously inhabited house in England. Hemingford Grey Manor, which was the home of Lucy Boston, author of the Green Knowe books for children.

The ancient market town of St. Ives stands on the banks of the River Great Ouse, spanned by a six arch 15th century bridge with the tiny chapel of St. Ledger in the centre, one of four medieval bridge chapels surviving in England.

can be found in the Minster Precincts of Peterborough Cathedral. In 1536 Peterborough's Norman cathedral became the burial place of Henry VIII's first wife, Katharine of Aragon. Near by is the 3,000 year old Flag Fen Bronze Age Settlement, one of Europe's most important archaeological sites from that period.

Wisbech is an elegant Georgian town, surrounded by orchards and bulb fields. Visit the Wisbech and Fenland Museum, Peckover House and lovers of real ale should take the opportunity to visit Elgoods Brewery, to sample its traditional ale.

Days out in Cambridgeshire


Places to Visit in Cambridgeshire