You are here:  Attractions -> Things to Do in Berkshire -> Windsor Castle 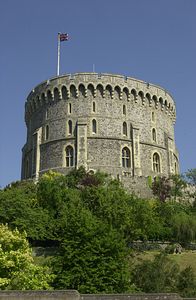 
Towering above the winding streets of Windsor, the 12th century Windsor Castle is the largest in England.

It is said to be the Queen's favourite residence, just 25 miles east of London and set in 13 acres of gardens and grounds.

Windsor Castle is the only royal castle to have been continuously inhabited since the Middle Ages and is the largest inhabited castle in the world.

It has plenty of different buildings and attractions within the walls and visitors can easily spend a whole day exploring the gardens, chapel and state apartments as well as taking guided tours. 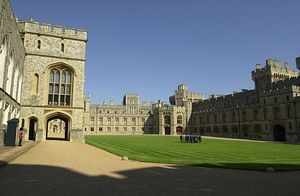 around with its iconic round tower.

If the Royal Standard is flying from the mast, it means the Queen is in residence.

In her absence, the Union Jack is flown.

The first castle at Windsor was built by William the Conqueror in 1070 and was one of nine castles built as a ring of defence around London.

It was a day's march from the Tower of London and the castle was intended to defend the western approaches to the city.

The castle was on the edge of royal hunting grounds in what is now Windsor Great Park.

The wooden bailey was eventually replaced with a stone structure and it continued to be added to over the centuries.

The stone curtain wall and round tower were built by Henry II between 1160 and 1179.

Windsor Castle survived various sieges. It was held by the Parliamentarians during the English Civil War from 1642-49 and narrowly escaped destruction when a bill to demolish it was defeated by one vote!

It went on to survive two world wars and 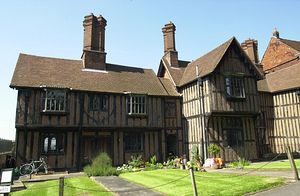 a fire and stands today as a magnificent historic castle and luxury palace.

Enter through the main gate at the top of Castle Hill and prepare to step into another world. Within the protective walls are many different buildings making it almost a self-contained city.

Windsor Castle contains 1000 rooms and more than 300 people live and work there.

The castle has 300 fireplaces which are tended by a full-time fendersmith, whose family have been doing the job for generations.

The clockmaker keeps the 450 clocks wound and it takes 16 hours to change them when the clocks change!

Large parts of the castle grounds and the State Apartments are used for state and royal entertaining.

The castle has extensive dungeons which were at one time used as a prison. They are now put to better use storing the fine wines and champagnes used for state banquets.

The castle is arranged in three wards:

The Upper Ward includes the Private Royal Apartments and grand State Apartments including the ballroom.

The interior is lavishly decorated with magnificent works of art by 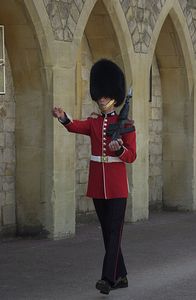 Rubens, Rembrandt, Michelangelo and Van Dyck among others.

This is also the location of Queen Elizabeth's Picture Gallery.

St Georges Hall was the scene of a devastating fire in 1992 and has since been fully restored.

It took an estimated one and a half million gallons of water to put out the fire and left much of the interior in ruins.

Fortunately, the royal family and staff salvaged many of the priceless artworks before the fire took hold.

It was caused by a spotlight touching a curtain, burnt for 15 hours and damaged 100 rooms.

Repairs cost £37 million, which was paid for by the Queen who opened Buckingham Palace to visitors for the first time, to raise the money.

The Middle Ward is actually on the highest point of the mound and includes the round tower, built like an amphitheatre.

Within the Round Tower are the Guard Chamber, Bed Chamber, Dressing Rooms and the Dining Room.

This is where the Norman Gate is and the Edward III Tower. 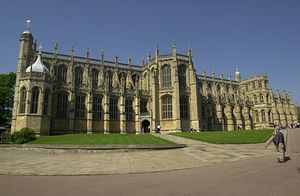 with the half-timbered Horseshoe Cloister.

The chapel is the architectural highlight of any visit to Windsor Castle. It is the burial place of ten monarchs including Henry VIII and Charles I.

The chapel is where the wedding ceremony of Prince Edward and Sophie Rhys-Jones took place in 1999 and where Prince Charles married Camilla Parker-Bowles in 2005.

Occasionally the chapel is closed to visitors but every day at 5.15pm the choir boys attend Evensong and the public are allowed to attend.

Sitting beneath the beautiful fan-vaulted ceiling listening to the choir with time to simply gaze around at the historic architecture, stained glass windows and monuments is a memory to be treasured.

A guided tour to see the inside of the castle is a must.

From October to March visitors can see George IV's private apartments, also known as the Semi-State Rooms. These are among the most richly decorated rooms in the castle with splendid antique furnishings.

During August and September, the East Terrace is open and overlooks Home Park, which has two working farms, and 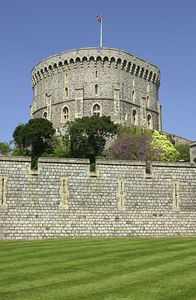 the lovely Rose Garden planted by George IV in the 1820s.

Perfectly miniature with working electric lights and running water, it is a delightful and unusual highlight of any visit.

Visitors can now climb to the top of the Round Tower as part of a tour and enjoy breathtaking views of the London skyline with the River Thames and Windsor Great Park spread below.

Another tour gives visitors access to the Royal Kitchens to see life behind-the-scenes at this working palace.

The tour lasts for 30 minutes and is only available on certain dates during August and September, so plan your visit accordingly!

Audio tours are included in the admission price and help you make the most of your visit with information on the many parts of the castle and grounds.

Make sure you see the Changing of the Guard which takes place at 11.00 am daily during the summer and at the same time on alternate days during the rest of the year. 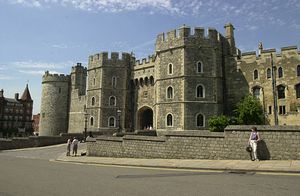 Days Out near Windsor Castle

Places to Visit near Windsor Castle