You are here:  Attractions -> Things to Do in Berkshire -> Runnymede 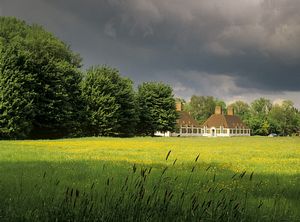 Runnymede is an integral part of England's history. These extensive water meadows along the banks of the River Thames near Windsor are where King John famously signed the Magna Carta in 1215.

It was the first such document which limited the powers and privileges of the English monarchy and became the basis for constitutional law in the English-speaking world. It was known as the Great Charter of English Liberties and was in effect a peace treaty, written in Latin, between King John and the barons.

Tradition has it that the king and his army travelled from nearby Windsor Castle and took up one side of the River Thames whilst the barons camped in the meadow opposite. The charter 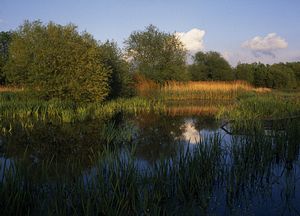 was signed on neutral territory, on Magna Carta Island in the centre of the river.

The name "Runnymede" comes from the Anglo-Saxon words "runieg" meaning "regular meeting" and "mede" being a meadow. The area is now marked by a number of monuments commemorating the occasion.

This site of historic significance has been owned by The National Trust since 1931 and the original tracts of land have been added to with the acquisition of Cooper's Hill Woods.

Previous to the National Trust ownership, Runnymede was the site for the Egham Races which were held here in the 18th century and 19th century until they were transferred to Kempton Park. The land had also been under threat of building work until it came under the permanent protection of the National Trust.

Visitors will see the domed classical pavilion and the engraved granite slab which marks the site of the sealing of the Magna Carta. Surprisingly the monument was paid for by the American Bar Association and contributions from 9,000 American lawyers, in recognition of the fact that it was the basis for the American Constitution which was drawn up in 1787.

This commemorative monument of the Magna Carta was designed by Sir Edward Maufe, R.A. and was unveiled in 1957, almost 750 years after 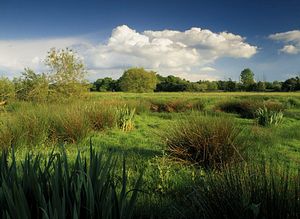 There are several other monuments at Runnymede. The Allied Aircrew Memorial, also designed by Maufe, was sited there in 1953 as a memorial to the 20,456 airmen who died during World War II and have no known grave. This white limestone memorial made history by being the first post-1945 building to be given a Grade I listed status.

Further buildings at Runnymede are the Lutyens Lodges which house the administrative centre for Runnymede and the National Trust tearooms. When the land was given to the National Trust by Lady Fairhaven, lodges were erected as a memorial to her husband, Urban Broughton. Designed by famous architect Sir Edwin Lutyens, they were opened in 1932 by the Prince of Wales, who later became Edward VIII.

One final connection of particular interest to American tourists is the John F. Kennedy Memorial which stands on an acre of American-owned land on nearby Cooper's Hill. Designed by G.A. Jellicoe in Portland stone it is inscribed with a quote from Kennedy's inaugural address. Forty-six steps lead through the trees to the monument, one for each year of his life.

Kennedy's memorial was unveiled in 1965 by Queen Elizabeth II and marks the final fascinating monument on this unique site of world history in its beautiful natural setting.

Days Out near Runnymede

Places to Visit near Runnymede