You are here: Articles -> British Kings and Queens -> Henry VIII 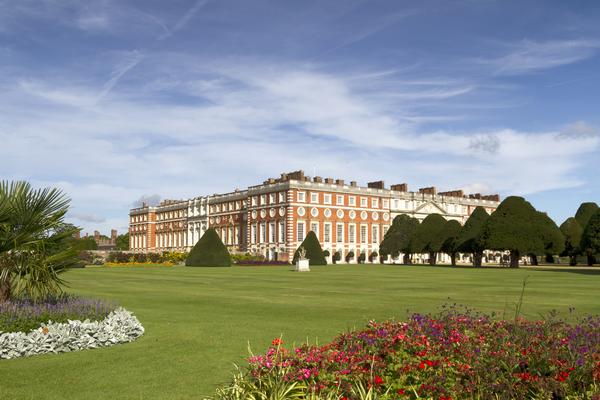 Henry VIII is the most well-known of the British kings, but possibly for all the wrong reasons. Born in 1491 to Henry VII and Elizabeth of York, he is infamous for his marriages, his beheadings and his self-indulgent lifestyle.

Pictured as a rotund and gluttonous figure with red hair and beard, he is normally pictured opulently dressed in ornate tunics with fur-trim, such as in the splendid portrait of him by Holbein which can be seen at the magnificent Castle Howard.

Henry VIII's passions in life were hunting and feasting, and he had the wherewithal to do both, so he was content to leave the matters of state, particularly later in life, to his able Lord Chancellor, Thomas Wolsey. Thomas Cromwell and the Archbishop of Canterbury, Thomas Cranmer, were both also powerful political advisors to him. 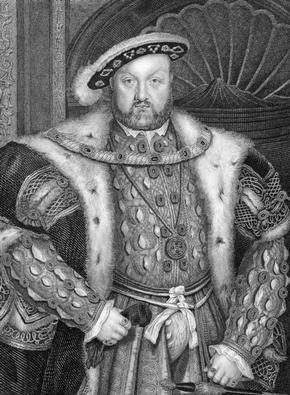 Henry is known to have had the use of many hunting grounds including the New Forest and his visits to Kenilworth Castle were probably to enjoy hunting.

Henry's favourite ship was the magnificent Mary Rose, which unfortunately sank during a battle with the French off the Isle of Wight. Salvaged in 1982 in a complex project, the remains are now in the Mary Rose Museum at Portsmouth Historic Dockyard.

Henry VIII ascended to the throne in 1509 upon the death of his father, his older brother having died unexpectedly some 7 years earlier. One of Henry's duties was to marry his brother's widow, Catherine of Aragon.

She bore him many children, most of whom did not survive infancy, apart from Mary who later became Queen of England. Nicknamed "Bloody Mary", she proved that she could be just as ruthless as her father when occasion demanded it.

Catherine of Aragon was the first of his six wives, but what is less well remembered is that they were actually married for 24 years before Henry divorced her.

The one thing that eluded Henry was a healthy son and heir and his ego prevented him from ever considering it was not entirely his wives' fault!

His frustration in response to his desperate desire for an heir led to him finally divorcing Catherine of Aragon, but as the Pope refused to annul his marriage, Henry took matters into his own hands. His actions resulted in the Reformation and the separation of the Church of England from the Roman Catholic Church, with himself as Supreme Head of the Church.

Dissolution of the Monasteries

A desire for religious reform had been growing in England as the privilege and wealth of the clergy were resented, and of course Henry needed money to fund his battles against Spain, France and Scotland. His seizing of the monastic lands and property and the Dissolution of the Monasteries made a deep mark on English history. Chester Cathedral among many others was ravaged and the monks were forced to abandon beautiful Forde Abbey after 400 years of work and dedication.

Henry used his new-found freedom from the Pope to marry Anne Boleyn in 1533. She produced a daughter, who became Elizabeth I, but after three years of marriage was executed for charges of adultery. Jane Seymour was Henry's next conquest, but after finally giving birth to the longed-for son, she died, just one year after their marriage. Their son Edward became Henry's long-awaited son and heir, but was a sickly child. As Edward VI, he succeeded his father to the throne at the tender age of nine, but died after ruling for just six years.

Edward was born at Hampton Court Palace in 1537. Built by Thomas Wolsey as the most magnificent palace in England, as soon as Henry set eyes on it, he had to have it and "persuaded" Wolsey to give it to him. (Wolsey's initials can still be seen over the entrance if you choose to visit this magnificent place). Henry lived here with five of his six wives and the palace is said to be haunted with the ghost of Jane Seymour lingering on the staircase and the screaming figure of Catherine Howard being witnessed.

Hampton Court Palace is still one of the crowing glories of English heritage with 750 acres of magnificent gardens, Tudor kitchens and the Chapel Royal. Visitors will see the Great Hall, the site of many of Henry's feasts, with the huge fireplace for roasting hogs. William Shakespeare's theatre company was known to have performed in this very room, which makes 16th century Tudor history come vividly to life. Records show that guests to Hampton Court Palace at that time consumed 600,000 gallons of beer, 8200 sheep, 2330 deer, 1870 pigs and over two thousand oxen and calves annually!

After the death of Jane Seymour, Henry married Anne of Cleves who was divorced after just 7 months to make way for Kathryn Howard, who was executed after two years for infidelity. Wife number six, in1543, was Katherine Parr, who outlived Henry by over a year. Henry died in 1547 leaving a mixed legacy. The Dissolution of the Monasteries had certainly benefited favoured nobility as well as the crown, there was a new religious order, the Church of England. Church estates were redistributed and monasteries and abbeys were closed.

As well as the palaces and places of interest already mentioned, one unique piece of memorabilia which can still be seen today is Henry VIII's prayer book, which contains the writing of both the king and two of his wives. It is on display in the library of Elton Hall in Cambridgeshire.