You are here:  Attractions -> Things to Do in Greater London -> Emirates Air Line Cable Cars

Bridges, ferry boats, railways, the Tube and even a pedestrian tunnel have been used to get across the River Thames in London, but the latest public transport link is the Emirates Air Line Cable Car. 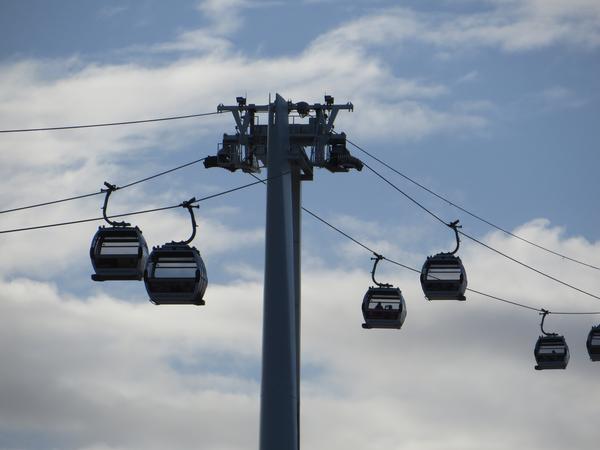 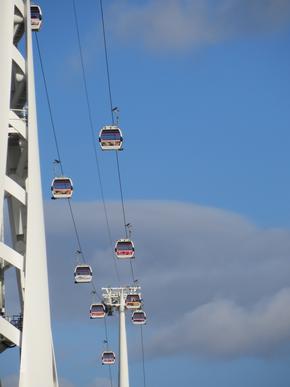 This newly constructed cable car ride doubles up as a popular visitor attraction, offering great views of London during the 0.6 mile (one-kilometre) journey.

Passengers ride across the River Thames in glass-windowed pods.

The cable car pods soar high above the River Thames at a height of 40 metres (160 feet) and take about five minutes to make the crossing.

It can carry an estimated 2,500 passengers per hour in a a far more efficient and eco-friendly way than an equivalent 50 buses.

The cable car offers a unique view of the London Docklands, Canary Wharf, the Olympic Park and the centre of London as it carries seated passengers in comfortable gondolas. 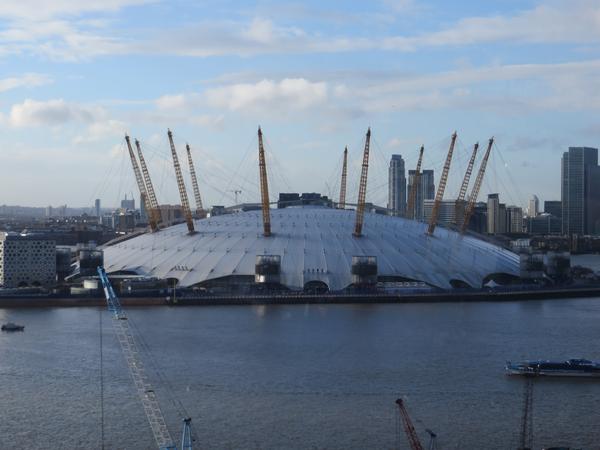 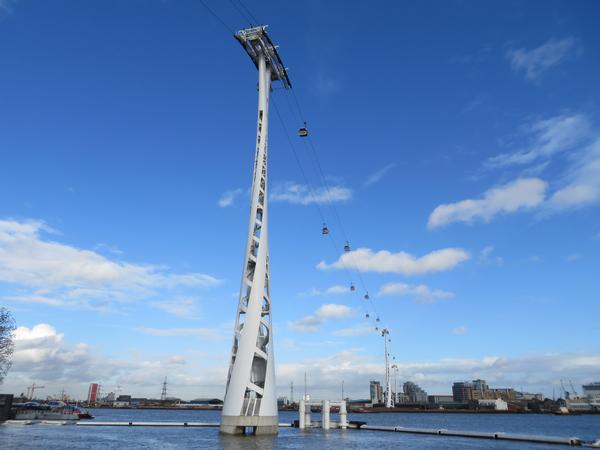 Construction of the Thames Cable Car

The Emirates Air Line opened in June 2012 just in time to provide an essential mode of transport for visitors heading for the Olympic Park during the London 2012 Olympics. 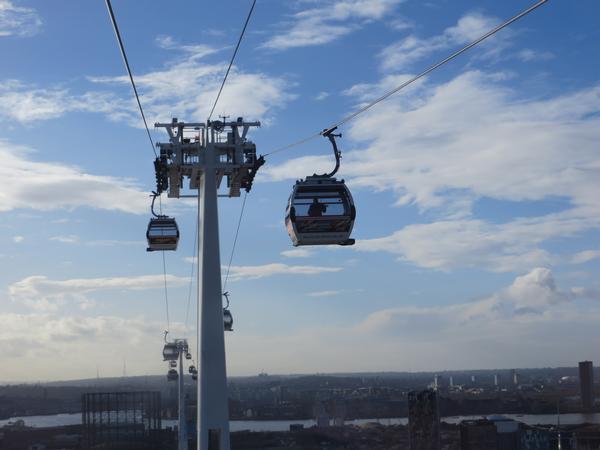 The Top of the Ride © AboutBritain.com

The estimated cost of £35 million mushroomed to £60 million and was sponsored by the Dubai-based Emirates Airline who then renamed the project the Emirates Air Line. 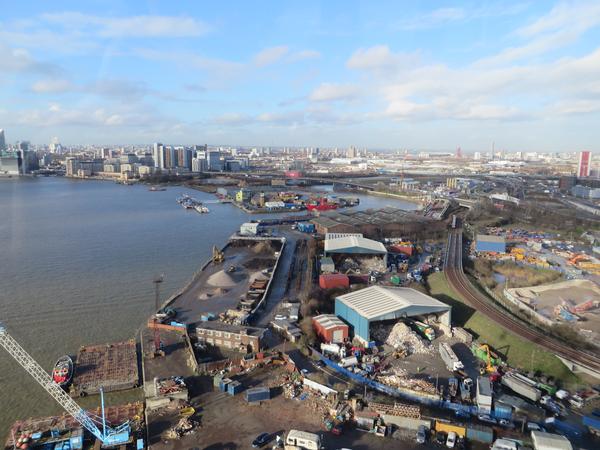 Further references to the airline, which may linger long after the initial 10-year sponsorship deal, include the rides being called "flights", tickets are "boarding passes" and the staff uniform closely resembles that of an airline flight attendant. 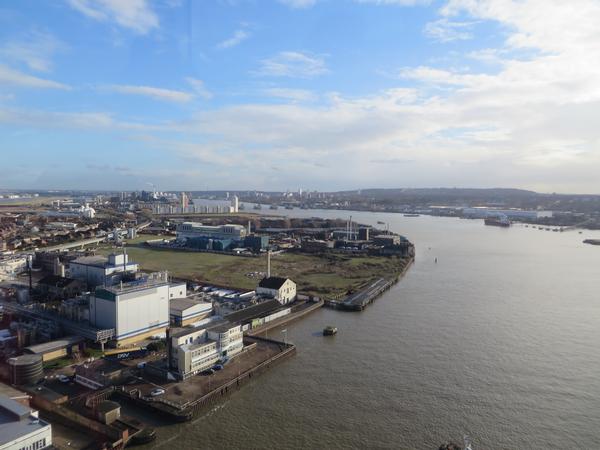 View Down the River © AboutBritain.com

Commuters, locals and visitors can pay for the ride using a prepaid Oyster card, if they have one, which is also a convenient cost-efficient way to pay for bus, tram, riverboat, rail and underground Tube journeys in London.

Taking a Ride on the Emirates Air Line

The Air Line terminal on the South side of the river is at Greenwich, near the underground station at North Greenwich, close to the O2 Arena. 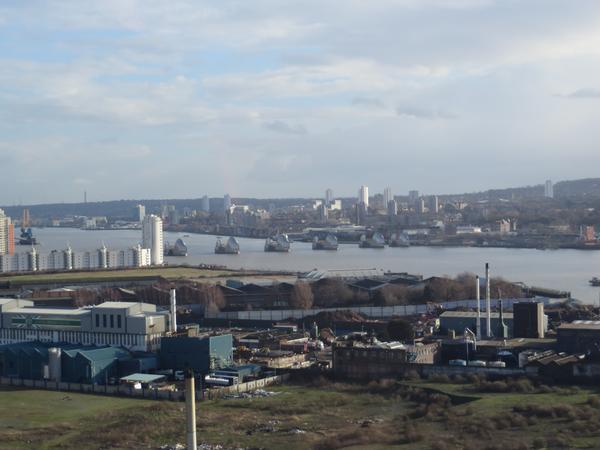 The terminal on the North bank of the Thames, the Royal Docks Terminal, is close to the Docklands Light Railway station at Royal Victoria, near the ExCel Centre.

Visitors simply wanting a cable car experience and views of the Thames can do a return journey, or it can be used to get from one side of the river to the other. 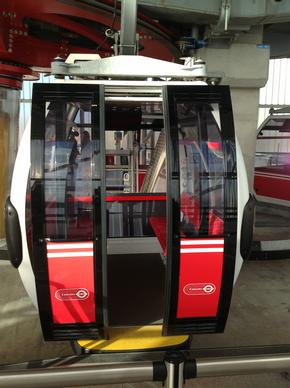 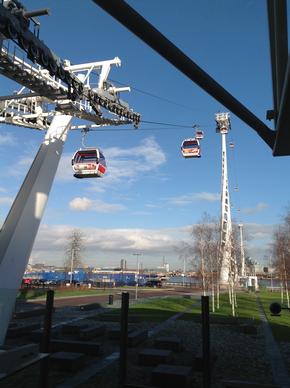 As with the London Eye, passengers must board the slow moving pods which carry 10 people.

Standing is not permitted and retractable seats allow passengers to travel with pushchairs and bicycles. 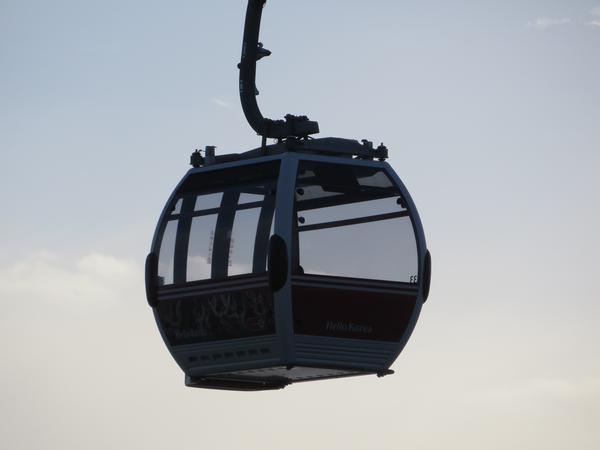 The ride is silent and smooth apart from slight bumps as it passes the mechanism approaching the terminal. 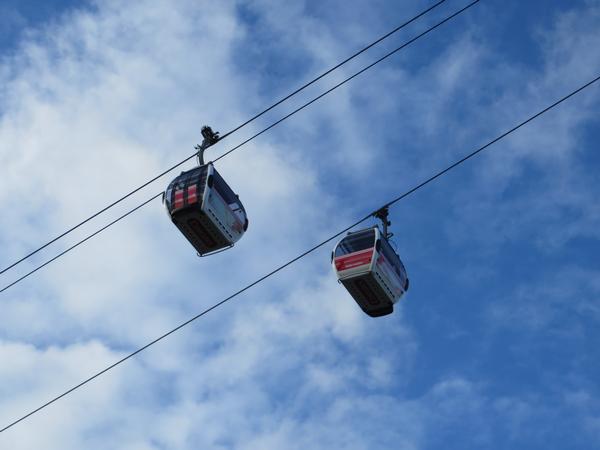 Passengers will find fares are much cheaper than the London Eye, but the ride is considerably shorter. 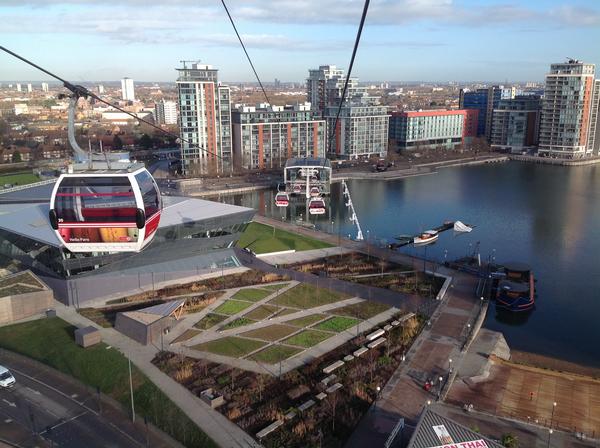 View of The Crystal © AboutBritain.com

A free inflight map is provided to help visitors identify landmarks including Canary Wharf, O2, London City Airport, Olympic Park and the Gherkin building. In the distance, St Paul's Cathedral, the Shard and Wembley Stadium may be seen.