You are here:  Attractions -> Things to Do in Greater London -> Old Royal Naval College 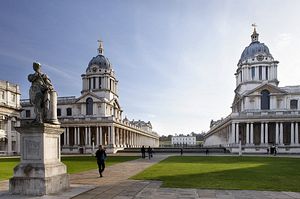 
The Old Royal Naval College occupies part of the historic group of buildings on the south bank of the River Thames in London, known as "Wren's twin-domed riverside masterpiece", it is the focal point of the Maritime Greenwich World Heritage site.

Since the 1420s royalty has favoured this site. Henry VII had a royal residence built here. His son Henry VIII turned it into an ostentatious Palace of grandeur and culture. The Palace was the birthplace of future Queens, Mary and Elizabeth I.

In spite of the fact that in 1615 the wife of James I, Anne of Denmark contracted a house to be built on the site; it was not favoured or lived in by the Stuart Kings. During the 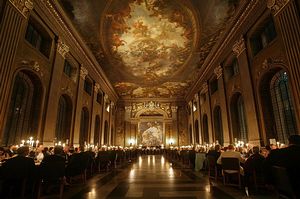 English Civil War it became derelict and was removed to make room for the plan of Charles II for a lavish Palace, which was never used.

In 1694 the Old Royal Naval College was formed by Royal Charter as the Royal Hospital for the help and support of seamen. Sir Christopher Wren created the original plans and during the eighteenth century the building was worked upon by architects, such as Nicholas Hawksmoor, Vanbrugh and finally finished by James Stuart.

The disused buildings at Greenwich were turned into the Royal Naval College for Naval Officers. With the advent of steam ships, more advanced technological training was required and full training was given to officers here.

Women were accepted to the college in 1939 and WRNS were trained here in World War II. In 1998 the Royal Naval Staff College was moved from Greenwich to take up residence at the joint Service 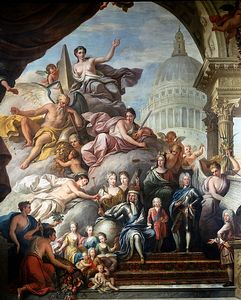 The best place to begin a visit to the Old Royal Naval College is at Discover Greenwich Visitor Centre, housed in the Grade II listed Pepys building. This refurbished building houses a permanent exhibition, which covers 500 years of history of the people who created the buildings and landscape of Greenwich over the centuries.

There are many interesting 'hands on' things for families to do in the centre. Whilst you are here, don't forget to pick up information on a trail to follow, which is great fun for all the family.

Also in the visitor centre is a gift shop and the Old Brewery, where you can enjoy a snack and a refreshing drink.

Is situated within the king William Court and is often described as the 'finest dining hall in Europe' and could also be known as the 'Jewel in the Crown' of the Old Royal Naval College. 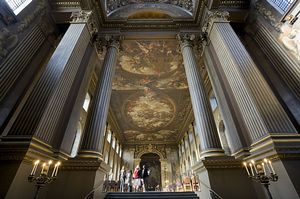 Sir Christopher Wren designed the roof and the dome; in 1708 James Thornhill was instructed to decorate the interior "with all possible references to the Navy in Britain's fortunes". After surveying this masterpiece it can be no wonder to anyone that it took 19 years for the work to be completed!

Ironically after all his magnificent work, the hall was considered to be too fine for use as a dining room for the Naval Pensioners.

Honourable members of the public were charged a small fee and admitted into the Painted Hall, where the Greenwich Pensioners gave them a guided tour.

Horatio Nelson's body was brought to the Painted Hall to lie in state, after his death in the Battle of 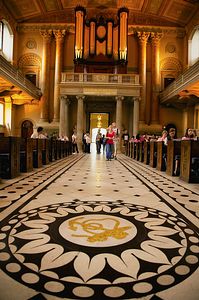 Trafalgar; the place where his coffin lay is marked by a plaque. After the lying in state it was taken to St. Paul's Cathedral where it was buried in the crypt.

From 1824 - 1936 the Painted Hall became the National Gallery of Naval Art and housed over 300 paintings of naval interest as well as drawings, portrait busts and ship models, which were the foundation of the National Maritime Museum's art collection.

At last in 1939 after restoration the breathtaking Painted Hall came into its own and became the dining room for the officers of the Royal Naval College. Many prestigious dinner parties were held here including a celebratory banquet marking the formation of the United Nations.

Today the Painted Hall is open to visitors free of charge. It is still being used for formal dinners and weddings.

You can learn more about the Painted Hall, by joining one of the Yeomen guides to hear a talk or a guided tour.

Originally designed by Sir Christopher Wren, the Chapel was built by Thomas Ripley.
In 1779 a devastating fire demolished the 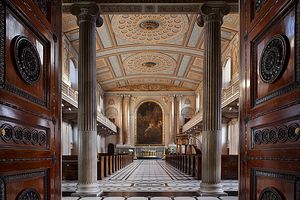 interior of the chapel, leaving only the exterior walls standing. After restoration, James Athenian Stuart redecorated the Chapel and created the neoclassical interior, which we can see today.

The Chapel is dedicated to St. Peter and St. Paul both of whom had connections with the sea and water. The Chapel contains many naval insignia, which were reminders of their seafaring life for the residents of the Royal Hospital.

Extensive restoration took place in the 1950s and the Chapel is now in a similar condition to when it was restored after the fire. Services are held here both during the week and on Sunday mornings to which all are welcome.

The fine curved ceiling affords the Chapel excellent acoustics, where the Samuel Green organ can be enjoyed. Concerts, classes and recitals are held and performed in the chapel, by the neighbouring Trinity Laban Conservatoire of Music and Dance, featuring music in keeping with the age of the building.

There are events, talks, and trails taking place throughout the year at the Old Royal Naval College. You can visit the ORNC website to find dates and full details.