You are here:  Attractions -> Things to Do in Greater London -> City of London Billingsgate Market 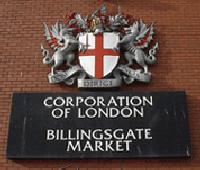 Billingsgate is the United Kingdom's largest inland fish market. An average of 25,000 tonnes of fish and fish products are sold through its merchants each year.

The history of Billingsgate can be traced back to 1400, when Henry IV granted a charter giving citizens the right to collect customs and tolls at Cheap, Billingsgate and Smithfield.

Since then, the City's role as Market Authority has been confirmed by various acts of parliament including the Billingsgate Market Acts in 1846 and 1871 which gave it responsibility for making byelaws and regulations, and the collection of rents, tolls and other charges.

In the past, the area was called Byllynsgate or Blynesgate, and only became Billingsgate later on.

It's not certain what the origin of the name might be, but some have speculated that it might be named after a watergate for the landing of goods, which was owned by someone called "Biling", hence "Biling's Gate". Others think it could be connected with King Belin from as long ago as 400BC.

Originally a general market for corn, coal, iron, wine, salt, pottery, fish and various other goods, Billingsgate doesn't seem to have become associated exclusively with the fish trade until the sixteenth century.

An Act of Parliament was passed in 1699 declaring it "a free and open market for all sorts of fish whatsoever".

There was a single exception: Dutch fishermen who had boats moored in the Thames were allowed to sell eels. This was in recognition of their role helping to feed the people during the Great Fire of London.

Until the mid-nineteenth century, the fish market didn't have a permanent building on the site. There were individual sheds and stalls around the dock or hythe', and fish was sold from those. As the size of the market grew, it became necessary to construct a purpose-built building.

The first market building was located on Lower Thames Street in 1850, but such was the rate of growth of the market that this soon became too small.

It was demolished in 1873 and was replaced by the building which stands on the site today. Designed by Sir Horace Jones and built by John Mowlem, the market building opened for business in 1876. The building is now listed by English Heritage.

The Market does not offer regular escorted tours for individual members of the public, however it is open to the public and you are welcome to visit.

Escorted tours can be arranged for groups of students, chefs, food establishments etc. Children under the age of 12 are not permitted on the market floor.

Days Out near City of London Billingsgate Market

Places to Visit near City of London Billingsgate Market