You are here:  Attractions -> Things to Do in Greater London -> Imperial War Museum London 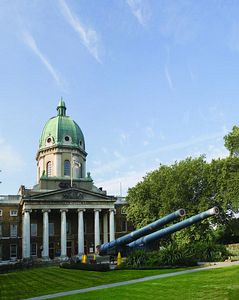 Imperial War Museum London is not a Museum of the distant past, but about people still alive today, their parents and grandparents. It tells the stories of those who have lived, fought and died in conflict from the First World War to the present day.

The central atrium holds some of the key large exhibits in the Collections including a Spitfire that saw action in the Battle of Britain and a London bus that carried troops on the Western Front during the First World War. Also featured is the Tamzine, the smallest of the 'little ships' that sailed across the Channel in 1940 to evacuate soldiers from the beaches at Dunkirk.

Visit the comprehensive First and Second World War galleries which include the Trench Experience, a walk-though re-creation of a front line trench in the autumn of 1916 and the Blitz Experience, a reconstruction of an air-raid shelter and a blitzed street in 1940.

Find out how children coped with wartime life in The Children's War exhibition which includes a re-creation of a 1940s house. Explore the role of espionage in Secret War and investigate the face of modern warfare in Conflicts Since 1945.

The Museum is also home to one of the largest collections of British twentieth century art, works from which are presented in a changing programme of displays.

The Holocaust Exhibition tells the story of the Nazi persecution of the Jews and other groups before and during the Second World War. Thought-provoking exhibits including photographs, documents, artefacts, posters and films offer stark evidence of persecution, collaboration and resistance.

The origins and implementation of the Nazi's 'Final Solution' are laid bare, while personal possessions including metal bowls used by concentration camp inmates and the boots owned by a woman who endured a death march demonstrate individual efforts at survival.

The testimonies of 15 Holocaust survivors help convey how families responded to the harsh circumstances and the resilience and good luck which allowed a few to survive.