You are here:  Towns -> Places to Visit in East Sussex -> Pevensey Bay

Things to do in Pevensey Bay, East Sussex

Pevensey Bay is on the coast of East Sussex, about five miles northeast of Eastbourne. The parish of Pevensey includes both the inland village of Pevensey and Pevensey Bay, which are about a mile apart.

Pevensey Bay is steeped in history. Pevensey Castle, originally a Roman fort, was taken over by the Normans in 1066 and was where William the Conqueror landed from France. The undefended bay was an ideal safe haven for his invading fleet.

The castle has survived several sieges. Orders to demolish it by Queen Elizabeth I and later by Oliver Cromwell's Puritans were ignored. The remaining structure was used as recently as 1942 when it became a defensive lookout.

This old fishing village was known in the 1600s as Wallsend as it was at the end of the protective sea wall from Eastbourne.

During the 18th century the coast around Pevensey Bay was the site of much smuggling of luxury goods and alcohol to avoid excise duties. There was an ugly clash between the customs men and Pevensey Bay smugglers in 1833 which seemed to be the end of the local contraband trade.

In the early 19th century several round Martello Towers were built along the bay as a defence during the Napoleonic Wars and some still remain.

Behind the shingle beach at Pevensey Bay is an area of salt marshes known as the Pevensey Levels. They are a Site of Special Scientific Interest and are home to many rare plants, birds and animals including the fen raft spider.

The town of Pevensey Bay is a seaside resort in miniature. It has a population of just over 3,100 yet manages to have facilities to rival those of other much larger towns. The village has several churches including St Wilfred's Church and Holy Rood Catholic Church.

Pevensey Bay even has its own railway station which in on the East Coastway Line and is served by Southern Trains. It makes it very easy for locals and visitors to visit Hastings and Eastbourne.

The village became a popular tourist resort in the early 1900s and still attracts summer visitors. It has a good range of local shops and some delightful old houses along the High Street. From the town there are splendid views inland of the South Downs which are particularly lovely when there is a fine sunset.

One of the members of the Pevensey Bay Sailing Club, Phil Morrison, was a British yacht designer. His son, Stevie, competed as a 49er sailor in the Olympics in 2008.

Things to do in Pevensey Bay

Pevensey Bay is famous for its windsurfing, fishing and its historic Martello Towers. Visitors can take a boat trip on a local fishing charter for an exciting day's sea fishing.

Tourists can visit the remains of Pevensey Castle, now managed by English Heritage. The castle had an inner and an outer bailey and there is an interesting 13th century gatehouse wall still remaining on the approach to the castle site.

Nearby Eastbourne offers plenty of activities including a seafront promenade and gardens and an excellent War Museum. In the other direction, Hastings has Smuggler's caves, a Fishermen's Museum, a castle and a Shipwreck Centre. 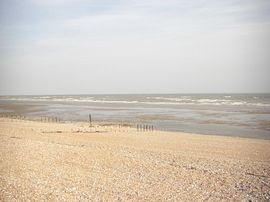 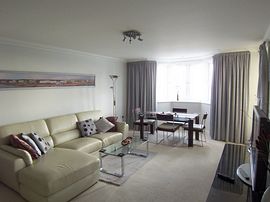 more self catering near Pevensey Bay...

Days Out in Pevensey Bay

Places to Visit near Pevensey Bay