You are here:  Towns -> Places to Visit in Greater London -> London Borough of Ealing

Things to do in London Borough of Ealing, Greater London 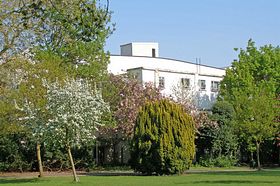 Ealing is the 11th largest borough in Greater London, covering 55.5 km. It has more than 300,000 inhabitants and is known for its ethnic and cultural diversity. 25% of Ealing's population is of south Asian origin, along with large Chinese, Polish and Afro-Caribbean communities.

Ealing is well known for its film studios where Peters Sellars, Alec Guiness and other British legends found fame and stardom. Ealing Studios celebrated its centenary in 2002, making it the oldest film studio still in production in the world.

Ealing is also the setting for Robert Rankin's series of novels, known as the Brentford Trilogy.

The London Borough of Ealing is one of the most ethnic boroughs in London with the black and minority ethnic of the population estimated at around 50% of the population. As a result, some signs at railway stations include the place name in Gurmukhi, a Punjabi script.

One of Ealing's most famous buildings is the Sri Guru Singh Sabha Gurdwara Temple, the largest Sikh temple outside India.

The London Borough of Ealing is one of London's prettiest boroughs. It has a broad spread of shops from national chains to specialist shops. It has a Farmer's Market and a busy antiques and crafts market as well as London's last agricultural market, which is held in Southall Park.

Ealing is home to both Brentford and Queens Park Rangers football clubs.

A stroll around Ealing will provide a host of heritage sites and historic buildings to be enjoyed. Pitshangar Manor and Gallery was the country home of Sir John Soane, the famous architect of the Bank of England. The house is open to the public and has a notable collection of Martinware pottery.

Visitors can take a peaceful stroll along the banks of the Grand Union Canal which carried goods between London and the Midlands in the early 19th century. The Hanwell Locks is an interesting place to watch the narrowboats navigate the incline, rising 53 feet (16 metres) over the flight of six locks.

Acton Town is on the Piccadilly and District lines

Chiswick Park and South Acton are on the District line

Ealing Broadway on the District and Central lines

The borough also has good bus and rail services into London.

Images of London Borough of Ealing 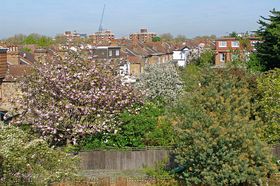 more self catering near London Borough of Ealing...

Days Out in London Borough of Ealing

Places to Visit near London Borough of Ealing