You are here:  Attractions -> Things to Do in Greater London -> 7 Hammersmith Terrace 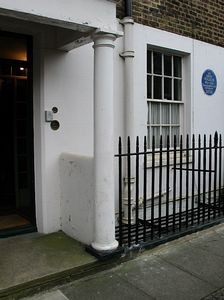 7 Hammersmith Terrace is an internationally important Arts and Crafts "time warp" full of William Morris treasures. One of a terrace of Georgian houses overlooking the Thames at the west end of Hammersmith's Upper Mall, it was the home from 1903 to his death in 1933 of Emery Walker, the great printer and antiquary who helped his friend and neighbour William Morris to set up the Kelmscott Press. After Walker's death in 1933, his daughter preserved the house as it had been in her father's lifetime. Full of original William Morris wallpapers, textiles and furniture, it is the best-preserved Arts and Crafts interior in Britain.

Sir Emery furnished the house with carpets, wallpapers and furniture from Morris & Co. One of the charms of the house is that it was a private home until 1999. It is still full of personal mementoes of Walker and his friends. These include:

When Emery Walker moved in to the Terrace in 1879, the area around the river had become quite industrialised with oil mills and waterworks. Walker and his family first lived at number 3 Hammersmith Terrace. In 1900, Walker set up the Doves Press with T.J. Cobden-Sanderson. The press, named after the nearby Dove pub, produced books until 1917.

Along with decorative arts by Arts & Crafts makers the house contains objects collected by Emery, his daughter Dorothy, and her companion Elizabeth de Haas on their travels.

Textiles from the Middle East are displayed with ceramics from Europe, Morocco and the Far East. There is furniture from Southern Africa and textiles and other objects from Central and Eastern Europe.

Visitors can hear about the stories of Emery and his family and friends, how the house came to be preserved and the importance of the house to the Arts & Crafts movement.

No 7 Hammersmith Terrace was a private home until recently and it opened to the public for the first time only in 2005. Due to its fragile nature, the house can only take a few hundred visitors a year, so many people have yet to hear about it, let alone see it.
Mayor of Hammersmith Minnie Scott Russell, after visiting in October 2007, said of the house, "I just think it feels like a very grown up doll's house and I could play for days in complete happiness".

Admission to the house is by pre-booked guided tours between April and September. The tours last approximately one hour and take in the garden and rooms over three floors.

Days Out near 7 Hammersmith Terrace

Places to Visit near 7 Hammersmith Terrace