You are here:  Attractions -> Things to Do in Greater London -> Hogarths House 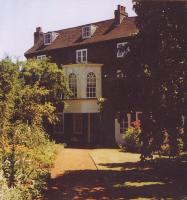 The well-known painter, engraver and satirist William Hogarth lived at this house in Chiswick. It was his from 1749 until his death in 1764.

This was the successful period of his life, so he was able to spend a lot of money on renovating the house - even building an extension and an ornate oriel-style window on the first floor.

The house provided a summer retreat from Hogarth's busy city life - his main residence and studio where in the area that is now Leicester Square. The high brick walls of the garden must have provided an wonderful peaceful atmosphere for Hogarth to escape to.

in there up until a few days before his death.

One of Hogarth's best-known works, called Gin Lane, has come to represent the dreadful reality of slum life in 18th century London; its lesser-known counterpart, Beer Street, shows the peace and prosperity which supposedly would result if the poor were encouraged to drink beer instead of gin!

Two floors of the house are open to visitors, and they have the most extensive collection of Hogarth's prints on permanent display.

Lieutenant-Colonel Shipman gave the house to the local council in 1909, and the house was renovated in 1996-97 to celebrate the tercentenary of Hogarth's birth.

The Gallery which is situated in the former kitchen wing shows small exhibitions which change periodically.

There is free car parking is at Chiswick House, and designated parking is available at the Hogarth Business Centre.

If you walk the short distance from the house to St Nicholas' Churchyard, you will find Hogarth's tomb complete with an inscription by his friend, the great actor, David Garrick.

Days Out near Hogarths House

Places to Visit near Hogarths House